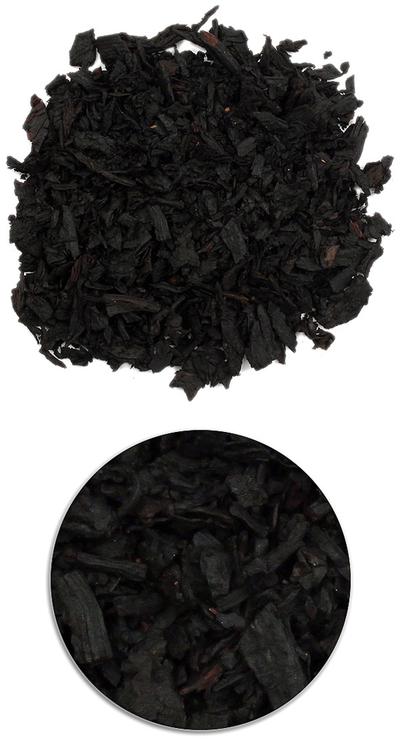 Moist and black and has a pleasant sweet burning aroma.

A black cavendish blend that offers vanilla and not much else, except for slight cocoa and sugar notes. The tobacco taste is not really present, nor was it meant to be. Has almost no nicotine. Won't bite. Needs dry time, but even then, leaves moisture in the bottom, and dottle, unless you smoke it real dry. Needs some relights. Has a routine flavor and after taste for this kind of blend. An all day smoke that can be used as a mixer, too.

Having a rough day, I felt the need to purchase a "headier" blend, something that would spin my vision a little and chase away the blues. I proceeded to browse the bulk tobacco, whiffing those that looked somewhat nasty. I then stumbled upon Bulk No.600. As Special Black's color is indeed charcoal black (as well as having a stench that reminds me somewhat of burnt molasses), I figured that this would be a good one to try. I purchased an ounce and proceeded home.

I grabbed a Peterson half bent and loaded up the bowl. The tobacco itself was quite moist and sticky to the touch. I packed it in nicely and went to light. This particular blend required an initial light to dry out the weed, and then two more after tamping down into place. Once it was lit however, no relights were required.

Expecting something that would hit me hard, I was shocked to discover that I was smoking an aromatic. It somewhat reminded me of McClelland's 2009 edition of Holiday Spirit. Although not an exact match, the room note is quite similar as is the taste. The main difference I noticed is that it is just a smidgen stronger in the vitamin N department - but not much.

Starting out, the experience was somewhat nice. All the aromas and tastes were there. However, I quickly found myself in need of a pipe cleaner as goop built up rather fast. About a third of the way down into the bowl, the taste started to disappear as it was replaced with some "nice" heat. Although it did not give me any tongue bite, it certainly didn't soothe the palate. About two-thirds into the bowl, it required another application from the same pipe cleaner. From that point on, all I noticed was heat. Yes, the room note was there, but the taste had all but vanished.

It did smoke all the way through to nice gray ash, but now I'm left with a coating on my tongue that only strong coffee, an engine degreaser or coke will remove. Yet thanks to the tingling sensation due to heat, I'm not ready to apply any "harsh" liquids to my abused tongue.

As I was not expecting an aromatic, and prefer to stay away from them, its hard to say if this is a horrible tobacco or not. Perhaps if I was more "experienced" with them, I could give a more detailed review. However, as it stands, this is not a blend that I will purchase again. I'll keep this 1 oz bit around for the rare occasion where I need something "different," however, I will finish up my 2009 Holiday Edition tin before going to this weed. As the room note is quite nice, and it wasn't a horrible smoke, I've decided to give it two stars instead of one. On a scale of 1-10, I'd probably give it a 3.

An undistinguished, overly PG'd black cavendish--artificial and cloying. Wet to the point of being difficult to light. Once lit, it sizzles like fat dropped on a hot fire.

Only redeeming quality: added a bit of aroma at about 20% to a home blend of white burley and red Virginia.

I have no idea why McClelland makes so many heavily cased aromatics that all lack any tobacco taste but also sells some of the best Virginia bulk tobaccos around.

It might seem unfair for a person, like me, who isn't a fan of aromatics, to be reviewing an aromatic, but descriptions of this baccy would have had it in the true cavendish family with only some sweetening and a bare whiff of flavouring. On this basis I purchased half a pound with a mind to using it to soften some other baccies in my cellar that had proven too strong or rough around the edges.

So let's be absolutely clear. This is NOT a cavendish with a hint of sugar and vanilla. It is a full blown in your face fruit and incense bomb that left me feeling nauseous and my mouth coated in synthetic grease. This doesn't make this a bad aromatic. Some people will love this sort of thing. But at least know what it is before you buy.

I don't know exactly what the flavouring comprises. The dominant essence is plum. But there is also a melange of things including vanilla, butterscotch (the combination of which might in turn suggest whiskey) and something incense like. I am reluctant to be critical of earlier reviewers, but some of them I have to wonder whether they even went near this tobacco.

Burns easily. Has little nicotine, but will still make your head spin from the smell.

Similar Blends: Some of the bulk Sutcliffe dark tobacco aromatics..

Similar Blends: Because of light casing, this is similar to Lane's BC-A..

Comment = Smooth, Mild, white ash Burn, slight After Taste, nothing special about this one

I wanted to like this tobacco, but it's not going to happen.

The aroma is OK, but definitely "off." Unlit, there's a strong and sweet vanilla/nut scent, but there's also a funky, mushroomy smell that is reminiscent of the kind of incense your hippy roommate burned in the dorm room.

The taste of the smoke is just horrible. It's like eating that stick of incense -- stick and all. This might be the first tobacco of any kind that I will toss in the trash. In a word: yuck.

There is nothing special about this black cavendish. I bought two ounces of bulk two years ago and smoked it all but it is not impressive. Room not is OK but there is not much flavor. Two stars.

This is an OK tobacco. The first time I tried it it was good enough and had no bite, but I quickly became bored with its lack of flavor...a bit goopy near the end.

the search continues for my perfect smoke!

This might be as bad as it gets. Like several other blends by this brand, the taste of wood is predominant. It is not your pipe that is on fire, it is the taste of this blend. With all the wonderful aromatics out there I can't imagine anyone choosing this. I rarely start a pipe and then empty it before the smoke is done, but I did with this. I couldn't take it.

From the "What's Dad got on the table for smoking today" file, comes Special Black.

For being touted as a (if it is so) Black and Moist pleasant sweet, it occurs as one most certainly, if devoid of such a crutch.

Nothing is further (from it) that it sucks except than possibly it does.

I have yet to decide, but am not still certain as to my ability to do so. (given the need) Having heard what I have read.

Wet and hot is the best description that comes to mind.Had in mind that it might be a good everyday smoke around the house and friends.Unfortunately 600 is to wet to burn decently.The taste upon lighting is mild and pleseant but the goop generated after a few puffs reminds me of the Texas marshes,sticky,almost quicksand like as I sank.At this point the bowl needs to be relit dont worry about burning the house down #600 will not stay lit long enough.Tounge bite would be nice but Hades on the tounge is a better description trying to stay lit.

Set aside hoping over time and little drying this blend will become another McClelland homerun.Until then moving on to some other great blends.

I recently received an oz. of Special Black in a sampler pack I purchased to fill out an order and having never smoked any blends from McClelland other than Frog Morton, I wanted to try some of their flavored blends even though I smoke far less aromatics than I did 5 years ago.

I suppose I'll have to completely disagree with the other reviewer on just about all counts. The tobacco is a large cut with a taste that I can best describe as being a bit like strong coffee.

The tobbacco was a bit slow to light, but once lit, I only had to relight once. This tobacco is extremly slow burning and burned to a dark gray ash all the way to the bottom of my Brebbia Lectura Churchwarden. I experienced no sizzling and popping and upon cleaning the pipe afterwards, it appeared to have burned very clean as well.

I don't smoke nearly as much aromatic blends as I did at one time, but I would not hesitate to buy a few oz. of this blend. Rating, 3 stars.