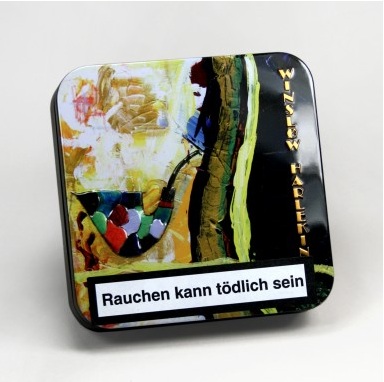 Brown and black cavendish, burley and combined with various degrees of Virginia sun-yellow to dark. Finished with sweet and fruity flavors such as vanilla, coconut, and limes for a smooth smoking experience.

As I lit the pipe i stared into the coals that had been made, and the sweet aroma of the tobacco, which smelled like a smell i experienced before. And upon staring into the tobacco taken back to they years I would spent in Kansas as a Utility Worker for a agricultural corporation (which I will not name). It was 1993 and I was a healthy 25 years old. I would say that I was in the prime physical shape of my life and life was good. But I remember driving my truck home from a party that had gone late into the night. I cant remember how late it was, but it was late enough for me to be the only car on the road for miles.

As my truck sat there at a stop sign, it suddenly shut off. This puzzled me, but i figured that it must happen occasionally to everyone. I tried to start the truck again, but i got nothing. I couldn't even get battery power. It was like someone had set off an EMP, totally killing my truck. I stepped out of my truck and started toward the front when a bright orange light shown down on me like a spot light. My first thought was "Military?!" but once I moved my eyes to the light's source I knew that this was not military. Immediately after i laid eyes on the light source my body began to rise, as i was leaving the ground, moving closer to this object hovering over me...

You guessed it. I was abducted by aliens. The source of the light, i had gathered was a UFO. Once I was in the alien craft I was terrified but fascinated at the same time. I was then approached by aliens themselves. They wore black and green colored suits so that none of their true skin or true form was revealed. multiple approached me and dragged me to a chamber deep in the ship.

Once i was in this chamber I was kept in a type of restraints that i cannot explain. The room was furnished with what looked like a bed and strange form which emitted light; I took these to be lamps. As I stood there restrained and alone, a message appeared on the wall across from me, written in plain english "The Queen approaches to meet you." At this point I thought I was going to be feasted on by a hideous monster. But as the chamber opened, a beautiful creature stood before me. She was not human, but she was humanoid with grey skin, black hair and dark blue lips. Her clothing was black and green and skin tight, accenting her large breasts, long legs and firm alien butt. I couldn't help but think dirty thoughts about this beautiful beast that was going to kill me.

Her yellow eyes pierced through me as she approached me, removed the restraints and pointed towards the bed like structure. I did as she had commanded. "Lay" she said. So I did. As i did that she pushed a button on her clothing, near the wrist, and her clothing disappeared. She stood before me naked, this alien queen, her body adorned with strange tattoos. She began to undress me and i let her have my way with me, as she did me like no human ever did or ever will be ABLE TO! The skeletal structure of this species of humanoids had to be different because she did things to me that seemed to defy gravity. But never was i in pain. Only intense pleasure as her gray body swayed too and fro on my american made shaft, while she emitted intense screams in her native alien tongue.

When she finished with me after what seemed like days, the queen got up from the bed and placed her finger on my wrist. I saw a strange alien mark begin to form there as i glanced one last time at her supple breasts and I drifted into a deep sleep.

I awoke in my truck with the sun shining on my face, at the same stop sign where I had been abducted. I wondered if it had all been a dream. If the ecstasy i had experienced had merely been in my imagination. As i looked at my wrist I say the mark she made, almost like a tattoo, there on my skin. I knew it was real. i knew what had happened was true. I had nailed an alien queen. I had fulfilled the dreams of every nerd/geek/dweeb on the face of the planet by bedding with an extra-terrestrial goddess. This tobacco reminds me of her smell. I will move it up in my rotation and will probably smoke it each day to remember her.

First of all I will refer to the tin. I beautiful tin from the old days. Relief. Without the usual stickers, it looks like Poul Winslow has painted it by hand one by one. Internally however, the results were not so pleasant. To be honest, I am no fan of aromatic blends, but Harlekin is to aromatic. Vanilla, coconut and lime in a very intense aromatic combination. Perhaps it's the lime that I didn't like. Lime is excellent for a refreshing summer Mojito, but I don't like it in the tobacco. The room note is excellent. I smoked 30 of the 100 grams more or less and I donated the rest. I kept the beautiful tin though.

Thank god! I thought i was the only one, who met the queen.

This tobacco has no tonguebite at all, smokes very gentle. It's no cavendish-bomb, the tobacco looks and smells excellent. Nice aroma, that looses strength at the last third of the bowl.

Purchased From: A. Puett in Lippstadt

The tin appearance caught my attention in a dutch tobacco shop.the tobacconist insisted i had to purchase this tobacco...so i did!when you open it a vanilla with banana perhaps flavour comes out.really pleasant.it is quite dry wich is not helpfull to pack but ok.lights easy and from the first puffs it is really great.high quality tobacco burns nice with a great taste from the beginning till the end.leaves a bit moist at the end of the bowl and offers a great smoking experience.a definitelly must try high quality aromatic!

Age When Smoked: When opened!

One of the greatest aromatic tobacco I ever tried. It's an elegant and subtle taste for everyone who lost his faith in aromatic pipe tobaccos. Don't be afraid, it has nothing to do with all those typical danish mixtures. It's light taste is marvelous, it reminds me a currant or blackberry. My familly and friends agreed that Winslow Harlekin has got the most captivating room note - as great that they love to smell it's tin. Concerning tin - unique and charming (Poul Winslow is also a painter). Winslow Harlekin is an expensive tobacco, but it's taste, smell, aroma and box are worth of it.

Now this is what I call a great quality aromatic!

Rather than a broken flake, I'd say it's course cut or chunky ribbons; all concealed in a polythene bag, inside the tin. The aroma coming from said tin is divine; strongly aromatic with a lot of fruit and nuts. As the bag's only folded shut and sealed with a slither of adhesive tape underneath the push-clip lid, it's been able to breath a touch; this calls for immediate smoking!

Once it's in my pipe and lit the first word to spring to my mind is Tropical; I find the lime, coconut, and citrus marry it up to this word perfectly. To be honest though, it might say there's vanilla in this, but if there is I can't taste any of it.

After about ten minutes, the citrus side begins to abate a little, giving way to a smoother smoke; it becomes even more enjoyable at about this point!

The nicotine's really mild from Harlekin; great for beginners and flavour only folks.

This is one of the best aromatic blends I've smoked: highly recommended.

I don't know why this tobacco has gotten negative reviews. Maybe the name Poul Winslow has created expectations that were too high. I bought this beautiful tin about three years ago, smoked half of it and loved it. I didn't smoke a pipe for a while, and forgot about this tobacco, until a few months ago. It was a bit dry, but after a little rehydration is was good to go again. It was even better than I remembered. It has aged very nicely. The tin note is fruity, but still smells natural. I like it. It packs easy, lights easy, and burns nice and slow. The flavor is sweet, a little (coco)nutty, but subtle. I can still taste the flavor of the tobacco, unlike with many other aromatics. The flavors stay present to the end of the bowl, and the tobacco doesn't bite my tongue. I love this tobacco, and so does my girlfriend. She even likes the way my moustache smells when I've smoked this stuff ;) Maybe not an everyday smoke, but I really enjoy it once in a while, especially on a warm spring evening with a cup of mint tea...

Also, check out tmoney's review on this blend, it's great.

Sometimes I wonder if I'm smoking the same tobacco as the other people who write these reviews. This tobacco smells great and when you smoke it the flavor is very present. I love this tobacco. The taste stays to the end of the bowl and I have no tonguebite at all. No hot smoke. This was love at first smoke :-) very recommended tobacco if you like sweet. Smoke it slow and you will be amazed.

This blend is a mystery...

No mention on the tin or in the tin about where it is made and how the blend is made... Thanks for the notice here above which gives some clues.

It is not even mentionned on Poul Winslow's website where only his selections 1 and 2 are listed...

I bought it after discussion with the one of the tobacconists in Geneva (the one on the right bank, going down to the lake - no advertising here!) who had no more ideas about it and was tempted as one other reviewer by the picture on the tin: beautiful painting with a pipe emerging on the surface.

That said, how is it? Well, I share previous reviews: that is disappointing. A fruity smell of the tobacco in the tin. Unfortunately that is like many aromatics which do not match expectations when smoked, with nothing easy to detect nor appreciate. I have smoked it using various bowls and it bites the tongue, whatever the bowl.

I will keep the tin in my drawer for paper clips.

somehow i found myself collecting tins , and this one is just beautiful. after opening... nothimg. tobbacco. full stop. nothing out of the ordinary. burns well, but the taste is so,so. nothing out of the ordinary. bit of a tongue biter, taste of plums and something fresh (grass?), bit of a cool breeze. naa.... not exciting. Winslow pipes are works of art, maybe he should stick to that?