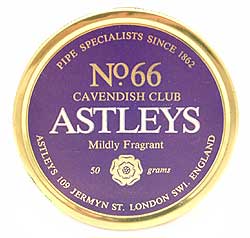 Golden and dark Virginia blend which is naturally sweet.

Number 66 was made as sort of a cross over between the aromatic crowd and those who prefer no added flavoring. The Vanilla addition is light and an unidentifiable second flavor was added that, to me, complimented the overall presentation more than the Vanilla. The Virginia employed is solid and smooth and the Black Cavendish, with the added flavoring, still provided some backbone and depth to the smoke. Just plain good stuff!

The Virginia cavendish offers a little grass and honey. The vanilla topping is mild and kind of weak. There's a bit of floral sweetness, too, and an essence of soapiness that works against the blend itself. Has almost no nicotine. Doesn't bite, but can burn a little warm if pushed much. It burns a little fast with a little inconsistency in the flavor, which suffers from lack of depth. Leaves little moisture in the bowl, and needs an average number of relights. Has a short lived, almost full after taste. Can be an all day smoke.

I'm trying to smoke all of the Astley's blends that are available to me, some of which (#109 Med Flake especially) are good smokes. I expected, from the name, Cavendish Club, for the blend to be jet black with a simple sugary taste; I was wrong. With some blends the list or positives are endless, and others struggle to gain one star:

The ONLY good point about this would be the tin note: it smells deliciously inviting without being too sticky. Okay, that's the good, on to the bad and the ugly:

The most difficult feature (for me) is when the smoke gets in my eyes: it's like having a wasp sting them! So, for that reason, DON'T smoke any in a nose warmer! The flavour's got to be the least sweet Cavendish I know of: instead of a delightful vanilla sweetness, which both aromatic fans and newbies love, I get a horrible floral note: it's not that strong, but it's still not pleasant. The temperature of the smoke's scorching, it's virtually impossible to smoke. And finally, the nicotine's very mild.

I very rarely throw a full tin away, but to be honest I'd feel bad if I were to smite my tobacco stash with it!

Purchased From: The Danish Pipe Sbop

Caveat: I'm not a regular cavendish smoker and only picked up this tin because I was sampling all the Astley's blends. Actually, I found No. 66 to be a fine--but rare--change of pace, smoking it mostly in a meer. When I need a touch of sweetness, I'll go to No. 66 (although now that the tin is finished, I doubt I'll buy another). It burned very well, down to a dry ash. As a palate changer, it is recommended for occasional smoking.

I smoked this tobacco about a month or so, not what I expected from this Cavendish blend.

Being a lover of the Cavendish blended tobaccos this one left me disappointed. The sweetness seemed to be throughout a full bowl of tobacco, no tongue bite, no harshness, but never really sensed any aroma

This is doubtlessly my least favorite of the Astley's line. It burns well and it doesn't bite, but it is utterly uninteresting.

Given the overall quality of both the English and the Virginia blends in the line, #66 seems almost like a silly afterthought. Perhaps if one were looking for something ultra-mild, it would prove a moderately rewarding smoke. It's sort of the Marlboro Ultra-Light of the Astley's line. It's almost as if someone suggested creating a blend for the lowest common denominator smoker so that they could tap into Davidoff's audience.

There isn't anything horrendously bad about the blend, it is just entirely lacking in anything that might render it even moderately interesting.

As a change of pace I tried this blend. Very mild and very slight on taste. No bite. No re-light. It burns well and leaves light grey ash. Once this tin is gone I'm not sure if I'll buy another one ....who knows

10-05-04 A disappointment for me, at least from a co. that has many blends I thoroughly enjoy.

Appearance and Tin aroma: brown and black ribbons abound, smells slightly sweet. I think it is the aroma from the process that converts VA leaf into cavendish.

Packing and Lighting: easy, moisture perfect out of tin.

Initial Flavor: mild cavendish, which always tastes "green" to me. Although in this one it is not off-putting.

Mid-Bowl: Nice, round mellow flavor. Very light to the point of boredom.

Bottom of Bowl: Slight build up of strength, sweetness is not cloying. Leaves a soft medium gray, dry ash.

Overall: IMO this is a non-descript blend. It is, well, bland. It is very soft on the palate, but so are some rich flavored English blends. I prefer cased aromatics to this. I suppose there are conn. of Cavendish, have no fear, I will not be buying anymore of this high quality cavendish blend, you can have it all.

In the Tin: This is a pretty even mixture of lightish and darkish strands. The aroma is tobacco and a faintly floral scent.

The Taste: Unlike American style Cavendish based aromatics this is composed of a considerably less sweet Cavendish base, so the taste is essentially mild tobacco taste with an unobtrusive and pleasant floral taste (not quite lavender but something like it perhaps). If you like mild smokes but don't care for the sugary American aromatics or you like Danish style aromatics but want something a little milder, you should try this. This is not a "profound" smoke by any stretch of the imagination but is a pleasant diversion.

If your a Cavendish smoker then you will probably like this blend. It's one of the best burning cavendish blends on the market. Burns good and clean.

If your an English or a strong Va or Perique smoker you will probably not like this blend. It offers nothing to this type of smoker.

Not a bad working/fishing smoke. Better then the so called "drug store blends". Smooth and suttle.

This is a very nice black cavendish! It smokes very, very cool and suprisingly pretty cleanly. It is rich in the way a good chocolate pudding is rich, and is in just about every respect a model black cavendish. Not at all syrupy, very rich-flavored, and mild. From that perspective, I just can't criticize it.

From the point of view of a smoker who wants something to put in their pipe, I can say that if you want a straight cavendish you could hardly do better-- but if you want a complex blend then this will likely dissapoint you, as it's just "one thing".