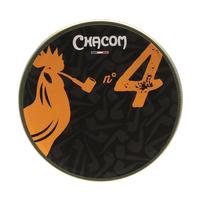 Chacom's #4 consists of various Virginias combined with a small portion of perique for some added strength and a touch of fruity spice. The mixture is then cold-pressed for four weeks before being cut into slices. It results in a flake tobacco that's medium in strength and rich in flavor.

As is often the case, although the tin's round the paper insert for the tobacco to sit in is square! This holds two rows of well speckled flakes. The nose doesn't suggest lots of Perique, I identify a lot more of the archetypal hay you'd expect from Virginias. The moisture's good; a little damp but not too much as to need drying out.

The smoke marries up to the tin note perfectly. The bright Virginia takes centre stage; hay, bread, quite fresh. As a bowl burns down a fruitiness, plumminess, comes from the splash of Perique. But, even though the Perique is a definite addition, we're not in 'spice' territory; it seasons, but isn't too formidable a flavour. The burn from it's faultless, creating a mid-temperature smoke. I haven't had any bite, at all.

#4? A smashing smoke for a warm summer day; like today! Bowl of this and a ginger beer. Or, a cold lager for the summer evening! Highly recommended:

best va/per i have ever had. lovely taste. great billows of smoke. no spittle. burns to an ash. 5 out of 4 stars.😎😎😎 not made by cornell & diehl. made by kohlhase & kopp

Purchased From: pipes and cigars.com

When I opened the tin, a strong dried apricot scent filled my nostrils. Later in the tin, that smell faded while still being detectable.

The presentation is perfect, K&K style. You can immediately recognize their style. Perfect rectangles stacked in the folded down paper.

The flakes are very easy to use. They can be rubbed out or broken as you like but I preferred to fold and stuff most of them. For this, I dried them a little, which made combustion pretty easy compared to other flakes.

The smoke itself is pretty medium in taste. By that, I mean the high notes many identify to citrus are subdued and the base only really come out at the bottom of the bowl. So you're here in the bread and hay territory. The perique is quite mild but you can definitely feel it, especially in the nose. The evolution of a bowl is very light. You mostly get the same bowl from start to finish, which would be a nice character for an all day smoker, I guess.

DGT works really well with this one. It gives a nice depth to the VA and some more strength to the perique. That's the way I enjoyed these flakes the most.

Otherwise, it burns pretty well with few relights or moisture if you dry and pack appropriately. Overall an easy flake.

I'm not giving this blend a high mark for several reasons. It is too simple for me. I'm not an all day smoker so when I do, I like more body and taste layers. It doesn't have anything very special to it. There are so many similar and better offerings, I don't know why one would chose to dive into this new comer.

This was very fresh so I expect cellaring this a little could be very beneficial to it. But a the price I can buy it here in France, it's just not worthy of that cellar status.

To finish, I'll say that I'm kind of disappointed of Chacom here. They're a great brand of pipes and they're only now trying to sell tobacco. To me, this seems very artificial as they're not making it themselves but merely slapping their name on it. It's not like they used to do it themselves and had to export the recipe. They could at least get a traditional french toasted burley made for them.

PS. Did j reeves really design this one? Source?

Very good tobacco with a pleasant and noticable taste, slightly evolving while smoking. As a newbie in pipe smoking world, I really recommand this tobacco for new pipe smokers.