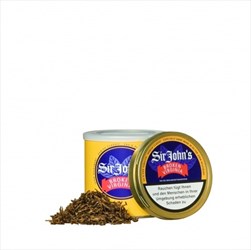 This is a wonderful smoke. Sweet yet not too sweet as to detract from the natural side!

Although it lists spices as the flavouring the tin has a sweet aroma. Broken Flake can often be a nebulous description, sometimes we see almost whole flakes but other times, like here, we see ribbons. Coarse ribbons, but not so coarse as can often be the case under this title. Because it's tightly packed into the tin the moisture hasn't abated loads. Suits me, damp but not 'wet'. From the inaugurate light this is bliss.

The first flavour to present itself is sweet, as the other reviews say, honey. But, to my palate, this is supported by a dough-like flavour, which becomes more preeminent after about ten minutes; to me! As a bowl burns this takes over, developing into a sort of Danish Pastry kind of flavour; no, not 'kind of', but a definite one! Again, that's me, YMMV! The smoke gives me no bite and only creeps toward medium in temperature if forced.

The color of the leaf was both bright and dark, and the tin aroma was heavenly; sweet over ripe plumbs comes to mind. The descriptive mentions a honey topping of sorts but I never tasted honey.At the match there wasn't much to brag about, but after the first layer had been consumed I detected more depth and the nicotine hit came through a little stronger than what I expect from Virginia Bright. The depth of the Virginia flavor got a little better once I reached the halfway point but never blossomed fully. I suspect this one will age well as the sugar content was halfway up the ladder. I was impressed by the overall presentation after the first couple of bowls I smoked, and think this is a very fine mid-range Virginia for those who prefer sweeter leaf and some of that good old Vitamin N. No worries if you have a sensitive waggler either. This one does not bite which tells me the leaf is of good quality.

Sand to mahogany brown ready rubbed (a bit too spiky to be a ribbon) with a tin aroma that reminded me of raisins with a bit of honey. Very Danish in character, which makes sense based on the name. This was gifted to me and I really wasn't expecting much from it but was pleasantly surprised.

This one starts off with the "honey-on-tobacco" taste for the first 5 minutes of the bowl. Then interestingly enough, the flavor kicks up a few notches, and the nicotine follows suit. Pretty fair nic hit from this one! The honey backs off a bit and those African/Indian Virginias give off a toasty flavor of oats and cereal, with some gutsy earth underneath. But while there was grain flavor, there was no graininess to the smoke. It was quite smooth, albeit there was a quite a bit of punchiness to keep this one out of the full realm of Danish tobaccos. The saccharine sweetness of many Danish blends was kept at bay through most of the smoke and this one showed more grit and "tobacco resolve", which I enjoyed. At the end of the bowl, I did not find myself longing for more, although this was far from my favorite Virginia, flavor-wise. On the other hand, I did finish this tin pretty quickly, which speaks highly for it. I give this 3.5 stars and for someone that really doesn't care for the Danish style, that's high praise.

A very light, mild and sweet smoke. Tastes almost like pure Virginia tobacco, just a little, sweet topping, probably honey. The perfect tobacco if you want something that tastes good but is not distracting.