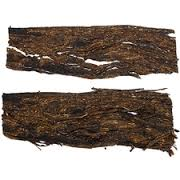 Bright CR is exactly as the name implies, light and bright. Comprised of strains of Virginia from Brazil, Malawi and Zimbabwe. The coconut topping soaks into the golden flake resulting in a blend that resembles Brown Flake or one of the popular Lakeland blends.

Bright CR Flake is a very high quality flake, so it was no surprise that the coconut version of this blend appeared to be of high quality too. The pouch scent is literally overwhelming. Unlike the very good, and more natural coconut flavoring I found in Larsen’s 2016 Limited Addition, the coconut in this blend smells very artificial. The flake took quite a while to dry under the heat of a desk lamp. In the pipe, my first impression was that this was simply awful and I have enjoyed other coconut flavored tobaccos in the past. But after playing around with the flake for a while, I found that drying it to near the point of nearly crispy, the flavor of Bright CR Coconut became more tolerable, more natural in coconut flavor, and at some points even enjoyable. It burns with the same nicotine strength as Bright CR Flake which to me is mild to medium. There is no bite and I would suggest smoking this in a cob. The over problem with this flake IMHO is that it simply has too much added flavoring. I have smoked and enjoyed more aromatics than I can count and I can’t recall ever rating the flavoring of a blend as “very strong.” I think that this could have been a lovely aromatic, but it is simply overdone.

The Virginias are grassy/hay-like with some tangy citrus, a pinch of earth, wood and dark fruit as well as a touch of vegetative floralness, and a slight acidic note. The sweet coconut topping greatly sublimates the tobaccos, and even tones down the slight essence of Lakeland. The smell out of the pouch is much more intense than the taste itself even though the tobaccos are fairly drenched in coconut. The strength and taste levels are a little closer to mild than they are to medium. The nic-hit is mild. Won’t bite or get harsh, and has no rough edges. Burns fairly cool, clean and a little slow with a sweetly consistent flavor. Leaves a little moisture in the bowl, and requires some relights. Has a pleasant, slightly lingering after taste, and can be an all day smoke. Two and a half stars.

The smell from the pouch seems heavily cased with coconut, there isn't any mistaking what's in this. The flake is a medium brown with the odd lighter speck here and there. It does require drying, it's not saturated but it's still too moist to smoke imminently. The flavour of the smoke is identical to what the aroma suggested, very false. To be fair, because the coconut casing is such a high calibre one it masks any Virginia nuances making the tobacco flavours redundant. I don't get much nicotine from this, it's quite mild in that area. A better area is the burn, it gives a good burn throughout and the smoke isn't particularly warm on the tongue. The room note is remarkable, it's got that much coconut in it!

I have no doubt that there will be plenty of folks who'll adore this but for me it's a bit to different, like smoking a Bounty chocolate bar! Not recommended.