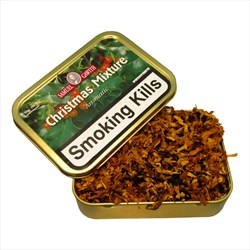 A beautiful uncomplicated mixture of bright and orange Virginias flavoured with the true scents of Christmas. Cinnamon rum and sherry make this an irresistibly delicious and homey blend.

I don't believe this is still produced, but I cellared a few tins some years back for this time of year.

The blend's made of mostly light and dark Virginias but there's a tiny amount of black Cavendish. The alcohol governs the tin-note and this is one of the rare creations from Sam G which has a perfect amount of moisture.

Although the description on here states 2014 I think this was more of a generic Christmas blend as the tin's label just says Christmas Mixture.

The various Virginias form a middle weight, simple, Virginia flavour: hay, grass, etc. The tobaccos aren't what this blend's about, the toppings are the preeminent characters. The current description isn't correct, it contains cinnamon, sherry, cherry and vanilla. The cherries are easily the most imperceptible of the bunch, the cinnamon and sherry are leading the pack here. I get a creaminess from the vanilla, which lessens any harshness from the cinnamon and sherry. The burn, speed, and bite are all good: even, medium, and bite-free.

Tin Description: A beautiful uncomplicated mixture of bright and orange Virginias flavoured with the true scents of Christmas. Cinnamon rum and sherry make this an irresistibly delicious and homey blend.

Note: TR has this listed as a limited edition from 2014. A shop in Germany still sells it. Either SG grossly over estimated their sales for the blend and this is from 2014 or it’s a “limited edition” in the sense that it’s just for Christmas. I’m going to put this review in the 2014 section on TR as the tin is the same on both TR and the shop in Germany and appears to have the same/similar components.

Storage: Sample from a close friend.

Disclaimer. I’m not an aromatic smoker so I will put two scores at the end of this review, one for me personally and one as a true attempt at being objective within the realm of aromatics. This will be the case for any aromatics I review going forward. I don’t feel it’s fair to give a single score when it is so far outside my preferred genre. I will however rate the blend based on my personal feelings.

It pretty much says it in the description, cinnamon and liqouresque fruits. The predominant flavor, however, is cinnamon. SG generally seems to try to put the tobacco a bit more forward than other blenders in their aromatics, but this one is pretty intensely topped. I'm probably more sensitive to cinnamon than some folks. I enjoyed the experience and the cinnamon, while omnipresent, wasn’t so overbearing as to be too much to handle.

It burned cooler than one would expect and the smoke was rather smooth. Sweet. It felt very much like smoking Christmas. Not much, if any gurgle, so it definitely wasn’t a PG laden mess.

I like this blend for what it is, a sweet Christmas targeted smoke with what I assume is an exceptional room note. I would prefer if they had brought a bit more tobacco depth to the blend and eased off about 2 clicks on the topping, but that’s my non aro side showing. That isn’t to say this was a more American style aromatic- it wasn’t. There definitely was tobacco present, but it was dominated by the topping. Which is fine, especially in a Christmas aro.

To explore my tobacco forward thinking, let’s use Firedance Flake. That is topped BBF, with blackberry as the flavor profile. You know you’re smoking an aromatic, but that depth of natural tobacco sweetness comes forward. I’ve heard anecdotal reports that with age, as the topping fades on that, you’re left with a hint of blackberry on really good BBF.

That’s what I would have liked to see from this blend. A hint of cinnamon, sherry, and fruit, but a deeper more intense tobacco flavor to bolster it.

I personally would never cellar this blend, nor is it intended to be “cellared” as far as the intent of this section in my review format is concerned. If you are a fan of aromatics and cinnamon and just wanted to have a tin around for the following year, sure, get two. But I would imagine this is a one off buy for most smokers, or, at the most, one tin a year if it’s around.

Personal: 4.8/10. I enjoyed the experience but there would be no need to smoke it again- I finished the sample in one big bowl.

Objective: 6.0/10. If you like cinnamon a lot this could be a higher score for you personally. The tobacco quality was good and it was certainly not a soppy mess.

10 - Gods Gift to Pipe Smokers, Buy It All No Matter the Cost

8 - Exceptional, More Than a Few Tins

4 - Smokable, but Wouldn’t Smoke it Again

1 - Why Would This Get Produced

Brief Overview of Reviewer’s General Tastes: I am primarily a VA (and it’s variant combination forms) smoker who has great affinity for SG and comparable EU manufactured blends, along with a few of the US micro blender shops. I do enjoy English/Balkan blends on occasion and a few very specific tobacco forward aromatics. I am exceptionally picky about blends and tend to cellar deep and narrow on things, reserving the bulk of my cellar planning and space for items I find to be of significant worth as far as taste and experience. Anything of quality, but not of obsessive value to me, is cellared and purchased as condimental flavor breaks between my regular rotation.

An OK christmas blend. I give it two stars simply because it doesn't have something that stands out. Strong cinnamon/sherry flavoring and quite pleasant room note.