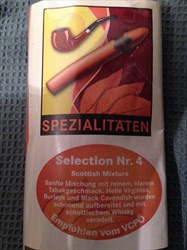 Notes: VCPÖ stands for "Verband der Cigarren- und Pfeifenfachhändler Österreichs" which is the Association of Cigar and Pipe Retailers of Austria. They released a series of five pipe tobaccos which, as the rumor goes, are developed by the VCPÖ itself. A bold move considering Austria is a country of 8.5 million with the oldest tobacco monopoly in the world, which states you cannot export any tobacco. Consequently you only can get these tobaccos in Austria.

The pouch of this blend as well as for the entire series is rather boring. But you can tell they tried to safe money in the packaging design and in the end this is a good thing.

After opening you are greeted by a somewhat alcoholic smell, which may or may not remind you about whisky. However the smell is rather nice even tho it at times has an artifical note to it, but not always. This artifical note sometimes (but not always) pops up in the actual smoke as well.

When you draw on the packed but yet unlit pipe the flavouring of the tobacco is already clearly to be tasted and gives some pleasure already.

The taste is nice with an alcoholic note that may have reminiscences of whisky or not. Many people stated that it reminds them more about a whiskyliquer than actual whisky. But in the end: how does whisky really taste? And what whisky are the blenders trying to imitate? Scotch, Single Malts, Bourbons?

Whatever it reminds you of, the flavouring is nice and on the sweet side. Its not overly complex and does not develop much over the course of the bowl but it is a nice tasting flavour and smell. Basically its just the standard smell and taste a standard whisky flavoured tobacco will have.

Which brings me to the next point: this is not a Scottish blend. It is a whisky flavoured blend. But thats ok in my book.

The flavouring wears off roughly about half of the bowl and leaves a sweet tobacco taste which also is ok. Towards the end of the bowl the tobacco flavours also wear of and then its just bland, but this is true for most aromatics and many non aromatics as well.

The aftertaste is rather strong on the palette with bold sweetness and some memories of the flavouring.

The smoke itself is smooth and free of tongue bite. In this regard it is an uncomplicated every day smoke, just light up and forget about it.

The only real beef that i have with this blend is that about 1/3 of the pouch where crumbs. Which i hate. Crumbs just are harder to pack and they smoke too hot with too little flavour and overall are evil.

I did enjoy this blend very much and it offers a solid smoke for the money they ask for it. Its a quality tobacco made with some care but in the end there is nothing special to it that would make you pick it over any other whisky flavoured tobaccos.

Do i recommend it? Yes, i do. Should you ever be in Austria and run out of tobacco then here is something i would suggest to get.