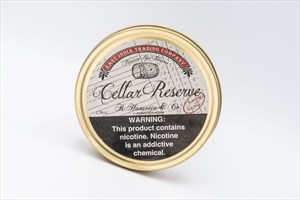 Cellar Reserve is a richly aromatic blend of sweet Virginia, nutty burley and soft black cavendish with notes of rum, vanilla and caramel. A splash of Louisiana perique is added for body, a deep fruitiness and just a hint of spice.

I was given a tin of Cellar Reserve by my friend who go me into pipe smoking in the first place. He did not like it so he have me almost an entire tin. I blew through the rest of the tin quickly. Just goes to show how different people like different things. I will start off with the sole other reviewer at this time. This stuff is heavily cased and does not fully dry even when left out for extended periods I time. Opening the tin the white sleeve is stained a dark brown and the tobacco is dark brown with black streaks in it as well. Opening the tin smells like brownie batter which I happen to love. After ample time out of the tin I load up a bowl. On first light this stuff has an amazing room note. The smell in my opinion transfers to the smoke quite well. This stuff holds that dessert flavor all the way through. I tried it in multiple pipes and found it smoked best in a full bend. There is a caramel chocolate honey taste. Not much tobacco flavor as it is heavily cased. I will say that I wig this stuff wasn't so overloaded but I love the stud anyway. It is similar to Molte Dolce (construction wise) in my opinion. I really enjoy this blend even though I have strayed away from most aromatics. I will likely buy more and save it for when I want something very sweet to smoke. They say there is perique in this blend as well which is just the right amount to make this an interesting departure from normal aromatics.

Purchased From: Given by a friend

Again, as in my review of Billow Balkan, I find myself going first with no other opinions to bounce off of; so, here goes. My initial reaction to this blend is almost identical to my reaction to the tin of Sutliff BRG that I opened a while back : first - whew! and then - what is East India doing? Just like the BRG, this tin of CR was sopping wet and reeking with overly dense applications of rum, vanilla, caramel and, God knows, what else. Once again I felt that somewhere down there in the tin was an interesting tobacco; if only I could detect it! Now, this is no joke or exaggeration. I aired this tin out with the lid off for - are you ready - a solid week before I could get it to a smokeable state. Then, and only then, did I have any idea of what this tobacco blend was like. What I found was an enjoyable and well-blended medium strength aromatic smoke that was pretty good. I didn't think that it would be an everyday smoke for me so I started blending with it to get an aromatic English blend and, I did. Try this blend: one half Missouri Meerschaum American Patriot, thirty percent Cellar Reserve, ten present Cornell and Diehl Back Porch and ten percent Cornell and Diehl Burley Flake #3. As for CR itself, it doesn't quite measure up to four stars but I can easily give it three - once you get past the trauma of opening it.

Attitude Adjustment Statement 2015-11-18: I'm not a man to keep on stubbornly in an incorrect opinion. On 2015-06-15 I slighted this blend and gave it three stars. Since that date I have continued to use it in micro blending to wonderful results and it is, by far, the favorite of any aromatic ingredient that I use. When you find yourself ordering sleeves of five tins, rather than just one or two, you know that you are dealing with a four star blend.

Purchased From: pipes and cigars.com

Similar Blends: some house blends I have sniffed but not smoked in pipe shop offerings over the years.

This blend is like a drowned rat the over use of casing has completely made this blend awful no taste of tobacco what so ever do not recommend.

Of East India's three aromatics this is by far the most mild smoke and has only a small amount of taste. Not as bad as Royal Challenge and not even close to the best of the three Officers Club. Kind of a weak aromatic that just offers a very small amount of flavor that comes and goes while going through the bowl. Buns pretty cool and room note is fair at best. This is a below average run of the mill aromatic that I can not recommend to my fellow pipers.

Age When Smoked: Open to air for two days

Another excellent blend from EITC. This is basically the same brilliant blend as Officers Club, with the same lovely Kahlua top dressing. The difference here is the addition of a pinch of Perique. However, there is barely enough added to taste over the flavoring. It is definitely present in the tin note and does help round out the blend. However, once again, not enough. Cheers

Age When Smoked: Fresh to 1 Month

I am a relatively new pipe smoker and have been savoring many different types and blends of tobaccos since starting last year. I recently purchased Cellar Reserve to go with the other two East India Trading Co. tobaccos I had previously tried. Upon opening the tin the aroma is very pronounced and pleasant smelling. It was moist but lit easily. I found it to be my new favorite of the three blends from this company. It is a tasteful, mild blend that could be an all day smoke. It has no tongue bite and left me a hankering for more. I believe I have now smoked at least four bowls in various pipes since receiving it yesterday from Pipes and Cigars. I will purchase more. I have indeed purchased and smoked more of this very good blend. In am presently (10/17/16) smoking my fifth tin of this very good smoke.

Age When Smoked: Fresh out of the tin upon receipt

East India Trading Company’s Cellar Reserve is for people who want to have their cake and smoke it, too, an aro and a half jammed into one tin. Long, fat, wet ribbons and chunks range from red-brown, to dark brown and black, and the initial tin note fairly explodes from the popped tin, rum, vanilla, caramel, coconut and chocolate. It actually smells like a kind of birthday cake I enjoyed for several years running, until the bakery went AWOL. When it’s dried I also get some orange. Truly yummy, but my first thought was, how much should I dry it out? This is going to be personal, for sure. After experimenting I found I prefer it pretty dry, which hasn’t taken long in our blistering sun. It handles and loads well wet or dry, and it lights and smokes down with no problems dried. Smoked straight from the tin (wet), I get some tastes I don’t care for from combusted toppings. Dried, there is very little of this and, further, I actually enjoy the tobaccos. The Cavendish is very sweet, also sour. The VAs seem to be red, and they are earthy, bready, and a little woody. The Burley is nutty, woody, a little floral, and bitter. The Perique is sour, musty figs and dates, with some bakery spices. Drying (or not) determines how much tobacco I can smell and taste over the toppings, and the toppings are prominent in any case, smelling and tasting delicious, just like the tin note. It's pretty consistent, top to bottom, except the tobaccos come up as it's smoked down. Strength is just over medium, with the nicotine trailing below medium. Tastes are at least medium. Room note is pleasant. Aftertaste from a dried bowl is a slightly metallic best of the smoke, very sweet.

Popping the tin sets the stage here. How Cellar Reserve sits with a given smoker will likely be determined by expectations and the smoker’s ability to tailor this blend to taste. I don't smoke a lot of aros, and I don't like many aros, but I’m giving CR four stars, not because I think it’s a world beater but because I think it’s better than a 3 at what it aims to be.

Similar Blends: Compare to/contrast with F & K's Bat With a Hat. I find Cellar Reserve to be similar but a good deal stronger..

I was pleased with EITS'c Royal Challenge, so I thought I would give another of their blends a go. Like the previous blend, this aromatic had plenty of toppings, so much so, that the paper insert was soaked and stained all the was through! The stuff was so caked on, my fingers were sticky afterwards. I can't really say what the flavor was supposed to be other than "dark".

The mix came off as "dark", but in a bad overworked piece of art kinda way (rather than leave an imperfection, the artist erases/edits it, to the point of making the problem worse). Lightning this wet pud was no easy task, so get ready to waste some lighter fluid.

Once on fire some burned caramel (or molasses?) sweetness comes through with a possible dark rum element. The flavor was just too dense to enjoy and making through the bowl was a slog.

I don't mind an aromatic with a huge punch, but in this case, less would be more, perhaps allowing the blend to breathe.