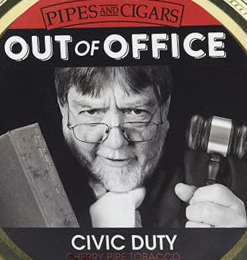 I enjoyed this. Nice cherry flavor that lasted through the bowl. Decent tobacco. It is edged out by a few I like even more, but the price is great.

Pop the tin and it smells like cough syrup. It looks like cheap flaked burley of which some has been toasted to make some of it darker so as to appear as if there is more variety than there really is.

Loading up a cob so as not to ruin a good briar, it packs easy and on has a smudge of PG on it, but I can still tell it is there. It lit easily enough, didn't need a bunch of delights, and smoked remarkably cool(like the label claims), with no bite to speak of, but also with out much in the way of solid tobacco flavor or nicotine. It's mostly just chemicals and fake flavors. It even crackles when you light it. It is a flash back t when I bought a cob and some pouches of otc tobacco at the drug store twenty five years ago in high school.

Worth trying on a lark, but I won't buy it again. I will probably give it to someone who actually likes these kinds of aromatics.

Purchased From: P and C

Picking up a pipe again after a 50 year hiatus (!) this was the first tobacco I've smoked in a very, very long time. I was surprised at the moistness of the tobacco upon open the tin. A different tin in the same "series" (Out of Office) was drier to the touch and stayed lit more easily (A Few Too Many). But, the smoking was pleasant, and the cherry notes were not overwhelming.

Room note below is misleading from this reviewer as I smoked it outdoors on the patio. Wife like it, however.

Purchased From: Pipes and Tobaccos

It’s a cherry aromatic; and a very mild one. If you like cherry blends, give this one a try, but if you want better flavor, try cult blood red moon or dark red, yum! This has no soul, and rings hollow unlike the ones mentioned.

Pipesandcigars.com - Civic Duty (Out of Office).

Although coarse cut, the pieces are all smokable, none need disregarding. It's a mixture of different shades of brown with a seldom amount of black pieces. It smells strongly of cherries and I found the moisture good.

I'm slightly confused, and hate to seem contentious toward other reviewers, but I find the topping far stronger, and sublimatey, than the rest to date do. I quite like the smoke, even if the cherries subconrad, beat, and vanquish the tobaccos: the cherry flavouring cartelizes, monopolises, governs, and rules the smoke from first light. And to be fair, tastes as false as can be! Although I get very little tobaccos finding their way past the topping, I notice more Burley than Virginia. The burn from Civic's good: once ignited it goes without needing much work to sustain it. The smoke from it's cool, and although heavily cased, bite free.

Nicotine: quite benign. Room-note: not 'bad', but quite heavy.

So, Civic Duty? Not bad, but not worth more than two: