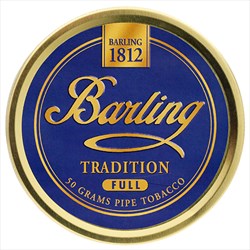 Cyprian and Syrian latakias, spiced with strong Kentucky and rounded off with a little, broad cut Virginia. Full and strong in taste. Traditional English.

Mostly mahogany brown to black, this has a cut that's by turns ribbon, wide chunks and those infernal stems. Hard to judge a cut overall by the stems in one tin, but that's what I have. Tin nose of latakia - a lot of latakia. Both kinds. A deep if not a rich aroma.

The flavor of this leans heavily toward the English side, with the lack of orientals and the subservient Virginia. The latakia ruled the show here - a ton of latakia flavor. The Virginia added a very modest sweetness (I could have used more) and the Kentucky a bit of earthy spice (could have used more of that, too) as well as a bit of nicotine but this was all about the latakia. Both did what they were supposed to with the tried and true "campfire smoke, wood and incense". The problem I had with the flavor was that it was monodimensional. This blend did not develop down the bowl and I kept hoping that the dusty taste would subside and some sweetness would come about. It was a dry smoking tobacco, and tasted very dry as well. Whereas I suppose I would call this a lat bomb blend, it wasn't as overwhelming to me as most others of that species. Another issue was that this kept plugging the draft holes of my pipes as I smoked. I went through pipe cleaners like crazy, and not because it smoked wet. I'm not sure if that was the result of the cut or if I was just unlucky but I didn't note the other reviewers having this issue. Overall, I think this one is worth a try if you enjoy latakia heavy blends but my experience with such (unless, apparently, they are blended by Greg Pease) is generally less than favorable. If they are more to your palate, this one should be on your list. For me, 2.5 stars.

Once the plastic bag inside the tin is opened, it’s easy to tell that Tradition is going to be a bold English blend. Many pipe smokers will find this dry enough to smoke right away, however I like my tobacco on the dry side so a few minutes of dry time was preferred. The blend of the two different Latakia’s offer both smoky and incense qualities to the smoke. Tradition is full to very full in flavor, but not strong in the nicotine department, but average. It burns cool and, personally I find the Syrian to really add the key dimension to this blend. It is what distinguishes this blend from other full English blends IMHO. The interplay between both Latakia’s is very pleasant. The broad cut Virginia, while adding a needed dimension, doesn't offer much sweetness. After being less than impressed with Garnet, Tradition is a well done smoke that lovers of full English blends and Latakia lovers will enjoy.

I've not tried what I call the fake revival of 1812. The original that I tried came in a cutter top and boy, was it ever strong stuff. The Kentucky packs a wallop and the Virginias and smoky Syrian Latakia are in the background but do offer a spine tingling compliment. Sensational weed, for sure.

A very nice blend clearly quality leaves were used, I take my hat off to Planta.

Tin-moist is just the right level, the first few bowls I dried out on a piece of paper for 5 to 10 minutes and the taste was a bit too bitter for me. There's some bitter in general from the Syrian Latakia which also adds a nice church incense note on the palate, mind you occasionally Cyprian can do that too. Both styles of Latakia are noticeable, interesting and quite enjoyable.

This is not a Latakia bomb nor is it a massive blend although biggish and somewhat full but that's subjective and I prefer big rich flavours anyway; jaded palate. For less experienced folks it may be over the top. A touch of Uncle Nic, which is just right I can pack bowls consecutively if the mood suits. For those whom desire a bowel moving Nic-blast you'd be better off with something else.

Quite a nice mouthfeel a touch creamy which often does not coincide with bitterness, this one's an exception. Another big exception and a big positive in my books, after popping the lid with oxidisation it gets better deeper and richer too. Far too often tinned blends tend to fade quickly and become quite mute with oxidisation some do recover but not all. I'd recommend a briar with a large 1" diameter bowl mind you most English and their cousins tend to show better in a larger bowl at least for me.

I'm not sure what it reminds me of perhaps something from Sam Gawith or JF Germain/Esoterica, maybe Murray era Dunhill too. Regardless it does have that certain 'British taste' to it, mind you the Germans adore that style being quite proficient at it.

Good stuff, I've plans to cellar a few tins and always nice to find something new and very tasty I hope it's around for awhile. Since I enjoyed this one I'll have to buy a tin of the Garnet Red medium and see how it goes.

Some English blends are designed for relaxation late in the day, and taste like gingerbread or cinnamon toast, but "Tradition" roars to life as a spicy, zingy, and energetic blend that seems a perfect complement to a crisp, bright winter day. The broad-cut leaf comes at a perfect moisture level, and when lit, the sage and pine flavors of Latakia -- both Cyprian and Syrian feature in this mixture, up to half of the total weight -- rise to the foreground like a firebird from the depths of Hell. But then, and here is the magic, that dark fired Kentucky Burley comes from nowhere and turns the spice flavor into a spicy, smoky one. At this point, the Virginias distinguish themselves mostly by subtlety, shaping this into a holiday flavor like habanero-infused pfefferneusen, but this blend of smoke makes for a tingling tongue and eye-opening blast of flavor. All Englishes may feel under-dressed without the dark fired leaf in the future. I am sad to see this one is discontinued, but if I brought it back, I would swap the proportions of dark fired and Latakia, and use white Burley instead of half of the Virginias. This was a great blend and occupied a unique place on the English mixture spectrum.

The mix is a cornucopia of sizes and cuts. There's plenty of manageable ribbons, big and small, but there's also some long stringy pieces and twigs. It's nicely hydrated.

This is mainly a Kentucky/Latakia blend. The Latakia doesn't steal the show with too much smokiness, and the Kentucky doesn't seem astringent: it flavours the smoke, without monopolizing it. The Virginia does the least work, requiring more 'looking for'. I get no tongue bite, and the burn from it's even and cool.

A well made blend, but I'm not a huge fan. Somewhat recommended:

Found a couple of fresh tins at a favorite tobacconist and grabbed one out of curiosity. It was fresh and smokably moist in its well sealed tin and plastic baggie. This packaging seems typical of German blended products and it seems to work very well. This blend appears to have been off the market for several years. The appearance is alarming for one used to English blends, its large coarse chunks and flakes with coarse ribbons are sort of unusual. The tin note says heavy topping or casing but such doesn’t appear to be the case when smoking it. It’s a tasty, mild smoke with ample flavor and no bite. I was smoking it in a Nording freehand with plenty of bowl capacity to accommodate the coarse cut and that seemed to work out OK. Burned clean to the bottom leaving a nice gray ash, no moisture and very little unsmokable stuff. I sorta like it and wish I could get more as it’s a nice departure from many common blends...Syrian Latakia mixed with Cyprian Latakia, Burley and ? If you run across some, I think you’d be wise to buy it and try it.

I went back to the tobacconist and bought the other tin. I revised my strength and taste opinions and will add that it’s best in a well broken in or otherwise cool smoking pipe.

Similar Blends: Haven’t tasted anything quite like it before but I suppose it’s similar to Dunhills standard mixture only with exaggerated flavor and aroma..

Heady tin note of campfire from the Latakia. DFK adds a spicy note as well. Dark mix cuts of the afore mentioned weeds with flecks of Virginia disbursed throughout. Moisture content good, packs well and burned at a slow rate as well. Flavor profile in my view is more from the DFKwith a spicy, earthy note. The Latakia is obvious but not over reaching by any means. The Virginia is just enough to provide a tad of sweet citrus. Not a lat bpm like Old Ironsides by any means. Burned well and proved consistent through the bowl. No weak or dull spots. Little Dottie and burned with little moisture. All in all a good smokei in what I call more of a non traditional English blend.