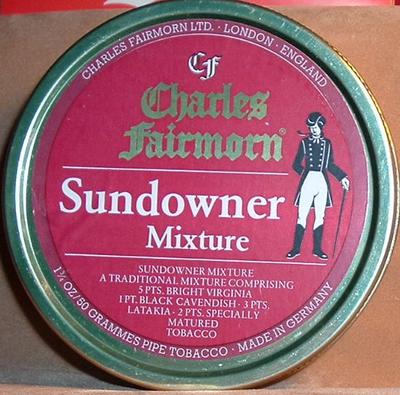 Sundowner is another Fairmorn blend I needed to check my notes from the late 1990's to get my impressions. I have not smoked it in years. A somewhat mild English style blend with a lot of complexity. The various types of leaf employed lent to a wonderful tin of tobacco. I smoked this one in the evenings as the flavor did not agree with my morning taste buds for some reason. In my notes I said that a fast puffing cadence produced a little nip.

This review is based upon a tin that has been hiding in my modest tobacco cellar since 2000. I have read that most tobacco's do not really benefit from aging much beyond 3 to 5 years. Regardless this one got 14 years and I've got to say NOTHING I've Smoked before has been so smooth and delicious. The aroma from the tin was heady with essence of plum/raisin and anise. Despite the years in the tin it was still moist enough that it needed some airing out. I left a pile sufficient to stuff my Brigham pot out to air for about 20 minutes before packing and firing up. At first flame the faint scent of anise that was present in the tin seemed to come to the forefront but faded back after about 7 to 10 minutes. Normally 30% Latakia would be pushing towards my tolerance level for the black weed of of the Mediterranean but in this case it was superb. The 5 parts Virginia no doubt reached the zenith of its aging some time before I opened this tin but still by 1/2 way through the bowl its sweetness, enhanced by that wee bit of Cavendish in the mix, became dominant lifting the smoking experience to a bright and refreshing level. Now approaching the end of this smoke the flavor has again shifted to the smokier and smoothness of the Latakia creating a full and creamy sensation in the mouth. Looking at the remnants I see white ash with some darker gray flecks and just a few unburnt bits with the bottom of the bowl as dry as when I loaded it up. I've been a pipe smoke since the early 70's and like most started with an aromatic (Borkum Riff whisky) moved to MacBarens Mixture, on to Mac's V#1, various VaPer's, Dunhill's Standard, My Mixture 965, and other English and Balkan mixtures. To sum up this experience (the fifth bowl since I opened the tin) I believe I have come as close to smoker's NIRVANA as I have every been. How I wish I had bought a couple of sleeves of this in 2000 and put them all away until now. I've just come to the realization this is going to disappear far to quickly but ooh what a treat each bowl will be! My conclusion has to be that for a basically English (a tad more Virginia here than most) aging is the route to go and despite the 5years limit essayed by others maybe 10 years (or more) may do the trick.

Age When Smoked: purchased in 2000

The last two times I had wanted to buy a tin, this blend was out at my favourite 'baccy store, and none other nearby carried it. So, three times lucky I guess.

Half a tin down, I still find a topping in the tin note; citrus-fruity, but definitely not a sauce, and the VA and Latakia do come through. The leaf is a long-ish ribbon cut, with about equal amounts of dark-to-black and bright in there, and the occasional piece of a ready-rubbed flake. The overall impression is more dark than bright, though.

Stuffing and lighting (and maintenance) are pretty much typical for this kind of cut: easy. The first few puffs, to me, seem to be tainted by the topping; afterwards, Sundowner morphs into something halfway in between Dunhill London Mixture and Sam Gawith Squadron Leader. A bit further into the smoke, a wonderful sweetness comes, but is not too, forward.

The room note is, of course, typical of English Mixtures, but on the more acceptable side. The taste develops toasty and smoky notes, sweetness enough to make it interesting, spice and so on--there are more complex smokes around, but this one is not exactly one-dimensional.

The VA sweetness seems to build up throughout the smoke, as does the spice: I like that. I enjoy Sundowner alongside a nice and dry Chardonnay or similar varietal wine.

I fell into a lot of Charles Fairmorn tobaccos lately, including this one, which is at least 5 years old. probably over 10. Simply superb. Smooth, creamy, delicious, plumes of rich smoke, and wife approved, despite the Lat, which really has softened with age. Moisture was right on, needed no drying before the match.

Over half Virginia, I reckon, and good leaf, too. Rich, vinegary tang (stewed fruit) of good matured Virginia, a little under 10% Cyprian Latakia and with a hint of Black Cav. It is a mild English but not that mild a smoke; I rate it medium in strength, maybe a tad more. Very complex -- many flavors sneak in and out of the bowl. Maybe because of the age, I did not pick up much of a dressing and could not tell what it was.

Can get bitey if pushed, so go easy and Sundowner Mixture will reveal itself to you in its own way. 4 stars, easy, as aged.

I was given a tin of this tobacco by a pipe smoking friend.

It burns well, and has an interesting mild flavor. Unfortunately, it was terribly irritating to the tongue - enough so that I could not enjoy it even to a small degree.

I confess to being rather sensitive in that regard, and usually avoid anything but classic English blends.

Others may find this product enjoyable, but I cannot bring myself to recommend it.

4/16/10 Though the tobacco did not seem particularly dry upon opening, I added a moisture device to keep it from loosing moisture (the tin is a taller one with a plastic lid, the type of which I find tends to dry the tobacco more quickly than the conventional all metal tin).In any event, I tried it again recently and found that the tongue bite has virtually disappeared. The experience was quite similar to the mild Balkans that I prefer. I am too much the novice to discern any topping.

This has to be among my favorite English mixtures, though it is barely an English in the traditional sense. Usually when and English has as much Virginia as Sundowner it is rendered hot and rather bland, Fairmorn has managed to negate this effect with a profusion of full flavored and sweet tobaccos, along with some type of fruit sauce. The result is a tasty and piquant tobacco that, while presuming to be an English, is really something else entirely. A highly successful English/Aromatic crossover, perhaps.

I love it and also notice the similarities to House of Windsor's Country Doctor. It may be better for lacking in the nutty blandness of burley. Be warned though, this is a blend for either slow smoking or a very cold day, as it can become very hot without much coercion.

Good English for the price. I got three 100g tins for about $4 a tin-of course that was a promo price, but I believe it's pretty reasonable in general. I can't sense any heavy flavorings, but then Latakia tends to cover flavorings up for me, so maybe that's it. This is not personally my favorite style of tobacco, and my favorite Englishes have been well-aged old tins, so I plan to cellar my two unopened tins for a while. It doesn't have as much character as some blends in this style, but it is inoffensive and a great value.

1-18-10 Three months opened. The tobacco is pretty dry now, so there must not be any significant topping. I can taste something here, but can't quite put my finger on it. Hell of a bargain, but this is one of those blends which give me some bite even if I go easy. Also, this reevaluation bowl made me salivate more than normal, though I tend to have the urge to spit when I smoke anything at all. Still, the taste is very good, and this is incredible quality for what I paid. I will smoke those tobaccos more often which punish me less, but will not mind having two unopened cans of this in reserve just in case times get hard. Tongue bite can be a personal reaction, and in all fairness I must also say that with this one the bite goes away-when I stop smoking it!

A Virginia-heavy English blend with a mysterious topping. The casing is light, pleasant, and hard to pin down. It?s cherry, I think. No, wait, it?s some sort of liquor. No, plums. It?ll keep you guessing. I prefer a heavier hand with the Latakia, though I can't complain since the ratio of the tobacco components is clearly listed on the label. Five parts VA to three parts Latakia, with one part black cav thrown in. Added to this is two parts ?specially matured tobacco.? What?s that supposed to mean? Guess that's the "special sauce."

The moisture content is quite high. The paper advertisement inserted with the tobacco was soaked with oils or PG or something. Each bowl required multiple relights in order to keep it burning all the way to the bottom of the bowl. And it will bite if you?re not careful.

I bought this expecting a traditional English mixture, and after the initial novelty wore off I became increasingly disappointed with Sundowner. The sweetness of the casing seemed to intensify each time I opened the tin, to the point that it almost became?to use an already overused term in tobacco reviews?cloying. I quickly realized that this one would have to be smoked only in pipes dedicated to aromatics. At first I likened Sundowner to Mephisto or to what I imagine Esoterica?s Pembroke to be like. In the end, however, I realized it was more like House of Windsor?s Revelation or Country Doctor, sans the burley, and that it was far inferior to Mephisto. Still, at less than $5 a tin, Chuck Fairmorn?s Sundowner is very reasonably priced and therefore probably worth a try as--OK, let?s use another overused term--a change-of-pace-English.