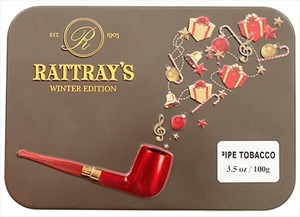 Rattray’s Winter Edition 2014 is what shows up in the mail when you order something online without making sure you read the fine print. I thought I was ordering the Winter Edition of 2015 but got a 100g tin of 2014 instead.

The first interesting thing I found was that absolutely no one has apparently smoked this stuff before. When I checked on tobaccoreviews.com it has the following information but no reviews.

However, label on the bottom of the tin reads: Several Virginia tobaccos – Black Cavendish – Broken Virginia. The tobacco is packed into a cello pouch in the tin.

The tobacco is dry and the tin aroma while pleasant isn’t overly strong. I do pick up the sweetness, a hint of nuttiness and fruitiness – almost a mixture of different berries or else a very subtle cherry. The website I ordered it from said it had a Caramel and Almond flavor but my nose just doesn’t pick up those flavors. I’m thinking the dryness and the subtle aroma may be a product of the tobacco being the 2014 blend so it has aged in the tin.

Having smoked 6 bowls so far in 4 different pipes, I find it a good smoke in briar, meerschaum or cob. It packs well, lights easily and burns evenly all the way to the bottom of the bowl. There is some pepper noticed on retro, but otherwise it seems to be a smooth, creamy smoke. I first noticed the sweetness and the fruit/berry but as I smoke the almond flavors become more noticeable. One of my sons and his wife (both are Chefs) say the aroma is more like a vanilla ice cream with a warm caramel topping.

I have not had a problem with bite from this tobacco yet even though I’ve smoked it while drinking black coffee, tea, beer and rum.

Those are my impressions of Rattray’s Winter Edition 2014. Your experience may differ.

Age When Smoked: over 1 year

I popped this one when a hole opened up in my rotation for an aromatic shortly before Thanksgiving. I figured this was intended to be enjoyed during the holidays as the festive tin would naturally lead one to conclude, so the timing seemed appropriate.

The tin was far from airtight as it was one of those large accordion hinged tins similar to the Peterson Limited Edition aromatics or Solani Silver Flake. A wise man would have probably jarred this upon receipt, but I did not. As far as I can tell the tobacco suffered none as the topping was still pungent and the leaf was at about the perfect moisture content.

In addition to the aroma and the feel, this also performed perfectly. It easily took a light and stayed a lit with very little effort. I smoked most bowls through a meerschaum as this is certainly a heavily topped blend capable of ghosting. The topping, IMO, overwhelmed the underlying tobacco. It is rife with traditional holiday aromas of rum and cranberry. I also pick up some orange flavor.

I was not that crazy about this topping and wished that it allowed more of the Burley and Virginia to shine from beneath. The Virginia, to me, was more apparent. The Burley was hard to detect.

I look at blends like these as more of a novelty than an "always have on hand" type of blend and I am judging it as such. To me this does not merit recommendation as Peterson's Annual Holiday offerings are much finer than this. Now, I don't know in these turbulent times whether Peterson is even making an annual Christmas blend any longer. I certainly know that McClelland's two annual Christmas blends are no longer being made. TBH, I don't even know if Rattray's makes an annual Christmas (winter) blend anymore.

Ultimately, I would rate this at 2 stars assuming all of the above were still under present manufacture, but if there really isn't any true representation of the holidays in aromatic form being produced any longer, than this would gain value IMO and would probably bump up to 3 stars.

The nutty, earthy, woody burley is the lead component. The grassy, citrusy Virginia is a supporting player as is the sugary black cavendish. The almond and caramel toppings are rather noticeable, but I claim there’s some fruit added as well. I observe a little citrus and sweet and lightly sour berries, and all the toppings sublimate the tobaccos quite a bit. The strength is a step past the center of mild to medium, while the taste is medium. The nic-hit is just past being mild. Won’t bite, but there is a tingling spice note, though I don’t know the source of it. Burns a tad warm and clean at a moderate pace with a mostly consistent flavor to the finish. Leaves little moisture in the bowl, and requires an average number of relights. Has a pleasant, slightly lingering after taste. Can be an all day smoke for the veteran smoker.