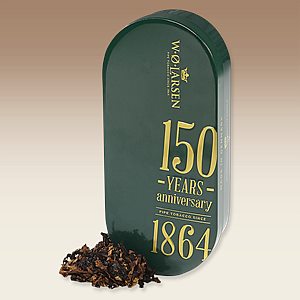 This blend celebrates a rich history of Danish pipe smoking. A variety of Virginias, from bronze to brown are blended with some robust dark fired Kentucky and a gentle and sweet black cavendish. The flavor and aroma is enhanced by a singular combination of warm vanilla, sweet and mellow plum, and the smooth, soft flavor of nougat.

Have to say I love the tin artwork.

As for the blend it comes at a great moisture level. Absolutely no drying time needed. Loads very well and takes a light nicely. Don't pack it too tight, because it does expand a bit more than some blends.

The top dressing is wonderful and comes through noticeably. It gives a nice coffee like flavor on the retrohale.

If you're into light Danish aromatics then give this one a go.

Black and brown mottled fairly wide ribbons. Light aromatic tin nose with some earthiness underneath. Comes in the beautiful tin shown but with a cheap baggie securing the tobacco. The tobacco was slightly moist and needed no further drying.

This tobacco was unabashedly Danish in taste... soft, lightly sweet and reminded me of my younger days sniffing the Danish blends offered by my local Tinder Box. The taste is less sugary than an American aromatic, and much less goopy. This smoked very dry and left absolutely no moisture at the bottom of my meerschaum pipes. In that sense, it's a well-crafted aromatic, something that most U.S companies lack the skill or impetus to create. At any rate, this one is a tobacco-first/aroma second blend. Unfortunately, the flavoring didn't taste much like the claimed vanilla/nougat/plum. The Dark Fired lent too much of an earthy bitter taste, possibly not mixing well with the flavoring agents. This tasted soft and sweet, but bitter. Working with Kentucky so that it melds seamlessly with other tobaccos is an artform that Larsen missed with this blend, IMHO. Not bad, and a fine example of a dry aromatic - but misses the most important point of smoking... the flavor. For me, anyway. Try it if you like Danish blends and don't want goop in your bowl or mouth.

The Virginias are grassy, citrus sweet with some earth. The black cavendish is vanilla smooth. The dark fired Kentucky is woody, bitter, and rather spicy, and almost dominates the other tobaccos. I get a distinctive floral, almost clove-like note from the Danish processing that at times is very tasty, but a little distracting in a large bowl pipe. I recommend a small bowl not only to avoid that, but also the lessen the effect of an occasional alcohol taste that adds a little sweet bitterness. The vanilla and nougat toppings are mild, as is the plum, which is a shade more obvious. The nic-hit is mild to medium, leaning more toward the latter. The flavors seem to gather strength as you go long. Burns slightly fast, won’t bite, and leaves little moisture in the bowl. Needs few relights. The flavor is consistent all the way through. I found the after taste too cloying to enjoy. The room note is pleasant. Highly aromatic, it fills your senses and I would not classify this as an all day smoke. In a small bowl, it’s a three star blend. In a group two size bowl or bigger, it’s two stars.

I am pretty happy to be through this tin that I got for free at the Saturday night cigar dinner at the Chicago Pipe show. The nougat, plum and whatever else that is flavoring this blend just comes off as Playdoh to me. That is how it smells to my nose and I just could not get over it.

I did get some compliments on the room note while up hunting this past fall, but all the compliments on room notes in the world just don't make up for something that is unpleasant to smoke. I did give quite a bit of this away to hasten the ending of the tin.

As for the components in the blend, I really could not discern them individually as the topping was just too strong. As for an aromatic, it is well done if you actually like the topping as it just doesn't seem to fade much throughout the duration of the smoke. This was unwelcome news for me as I would have rather tasted more of the DFK than the topping.

Someone recommended to the adults who liked to eat Playdoh as a child. :)