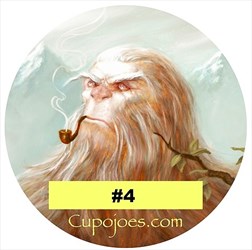 A straight medium Virginia flake made with the highest Virginia grades, pressed and aged before slicing.

This was the surprise tobacco of the year for me. Often times when tobacco shops farm out a blend you get some rather ho-hum efforts, but this one? Whomever came up with this flake is a GENIUS! For me, it was the best flake I smoked all year (Capstan Gold was a close second). This dark brown flecked tobacco comes in a single long folded strip about an inch and a half or two wide (and long, how long, I can't say). The tin note is absolutely stunning—I get an instant whiff of lavender and pepper with some deeper sugary undertones. And the taste? The taste is simply outstanding. A very complex mash of flavors, everything from possibly a light molasses or brown sugar to some fruity overtones. The lavender and pepper only come through very lightly in the taste. All in all, and one wouldn't think this combination of scents and flavors would work—this tobacco is a taste sensation. The nicotine levels are moderate. I had one bowl that lasted more than an hour.

I'll have to admit, Yeti Flake tasted better during the winter and fall months rather than the summer (I have no idea why this was so), and, it's not an everyday smoke, but rather a special one. Really special. Kudos to whomever developed this.

I'd like to know more about this tobacco, who developed it? Who produces it? According to Cup O' Joes it's blended in Germany, but how about some more info on this one, hey?

I will be stocking more of this one. This is a GREAT blend and I highly recommend it!

I agree with the two reviewers before me (WillBrown and clanobucklin) that this flake is truly outstanding. Very fruity and sweet with a nice depth to it. I think there is a topping here that closely matches the natural fruitiness of the Virginias. If there isn't then these are the most flavorful Virginias I've tasted. Came fairly dry out of the tin and was ready for immediate smoking. A wonderful all around smoke. Satisfies on every level.

Medium in body and taste. Flavoring is mild. Burns perfectly.

As is the usual case, although the tin is round the flakes sit inside a square paper insert. Two rows, covered in a mixture of dark and light flecks, average thickness, perfectly hydrated, and an abundant Virginia aroma; there isn't an adumbration of a casing, #4 just smells naturally sweet. The flakes rub out extremely easily.

In the smoke I get a decent mix of opulent Virginias, being fruity, bready, slightly sharp. There seems to be an equal proportion of reds, brights, browns, neither bullies another aside. There's a sweetness, but to my palate isn't as conducive to a topping as it is to lavish Virginias; rich, indulgent, but natural. I've smoked five bowls in a row, each has burned perfectly and I haven't even had so much as a nip of tongue bite.

#4 Yeti? If it has a fault I can't find it! Highly recommended:

I am sporadic Flake Smoker but I do know a good one - and this one of them. As the previous Reviewer noted this a mash of many flavors - lavender, fruit, leather, molasses and brown sugar.

The blend when smoked comes in guns blazing and then 1/3rd down settles down to a very nice complex smoke. Puffed slowly all the flavors appear to take a bow only to fade and reappear later on in the smoke.

With a Cool name and a Great taste - I plan on buying more in the future.

The Virginias are mostly medium brown with streaks of gold. Their aspects include a bit of dark fruit and earth, some citrus, vegetative grass and hay, a very light floral and minor spice notes. The sweetness has just more than a touch of malty fermentation. There’s some brown sugar that likely comes from the tobaccos, but a topping may also be partly responsible for it, and perhaps a very light fruitiness as well. It’s hard to tell how much of that is from toppings as this long flake was pressed and aged before release, and the sugar and fruit qualities often increase as a result. I claim processing and extremely mild toppings aid these features. The nic-hit is in the center of mild to medium. No chance of bite or harshness. Burns cool, clean and a little slow as flakes tend to do. While not a complex product, the flavors hold on to the finish with consistency, depth and essence of age. Leaves little dampness in the bowl, and requires some relights. Has a pleasant, slightly lingering after taste. Can be an all day smoke.