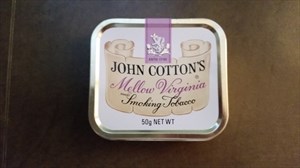 How the heck I never reviewed Cotton's Mellow Virginia before now is beyond me. I just got in a few tins to sell and came to TRC to see what I had written about it as I couldn't remember what I thought of it. When I saw that I had not reviewed it, I went back to my notes and found what I wrote back in 1992 -

"Not nearly as wonderful at the match as was the tin note, but still quite good. Not nearly as mellow as the name implies as this one has a little kick. An all natural Virginia taste with lots of beef but little gravy. Straight forward Virginia flavor of fine quality and depth."

I was able to acquire a tin recently of Mellow Virginia from a friend and I am not sure of its age, but it was more than ten years old. The tin scent is very, very inviting. It burns clean with no bite. Although sweet, it had less sweetness than other Virginia's that I have smoked of similar age. It is very straightforward with no complexity. I don’t get any fruitiness or hay, but the flavor, beyond me to describe, it unlike any Virginia that I can recall. Overall MV is a good entry into the Virginia market, but I wouldn’t pay the high eBay price for another rare tin.

Why did I do it to myself? Why?! I knew when I opened the tin this was going to be something special. Of all the tins I have, this was the one and only of this blend but I popped it anyway. A sweet, almost heavenly aroma emerged as the lid was removed. The sparkle of sugar crystals appeared as the rather stubborn paper advert was removed from this vintage tin. A medium dark leaf in a short ribbon cut, very easily packed. Only a match would do for this tobacco adventure. It was exceedingly smooth but full flavored at the onset. It had everything going for it; chocolaty, nutty, sweet you name it. Once it settled in, it presented itself as a Virginia powerhouse but still smooth with no bite or overwhelming kick. I could smoke this all day and night, the flavor kept getting better as it reached the bottom of the bowl. To the end, the flavor held strong. I never felt as though I was getting smacked with nicotine but it was there, flavor was King. I wish that I could compare it to something so the readers would have a frame of reference but I have to be honest and say it was THAT unique, I can’t compare it to anything else. I will say this without hesitation, should I ever see another tin again (which I hope I do), I will fight tooth and nail to make it mine!