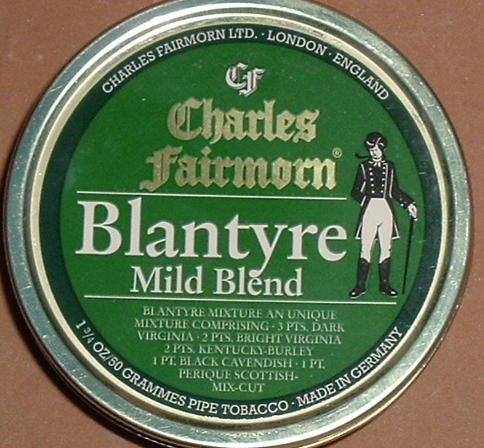 Blantyre, along with Lancer Slices, is a favorite in the Fairmorn line for me, but for entirely different reasons. Blantyre is a rather heady brew where the Virginia and Kentucky combine to throw some pretty stiff jabs. The Perique presence was far in the background, but still made its presence known in wisps. The black cavendish employed added to the body of the smoke. Truly enjoyable!

Here is another older tin purchased as a single item on Ebay ~ 2016. This tin's address printing identified it as the original London, England, generation before it migrated to Germany. The tin was well sealed and contained a very finely folded doily liner that, as a style, has all but disappeared today. The label tells you that this will be a Scottish mixture in a "mixed" cut. They weren't kidding and I found three widths of ribbons, some broken flake-like material and pieces of torn tobacco leaves that looked like little flags. There was still a modicum of moisture in the leaf and I gave it about twenty minutes to air out. Now, and once again, I am in agreement with reviewer Pipestud 2015-02-27 that Blantyre is a quality and tasty smoke that let's you identify and enjoy it's component tobaccos. I picked up the Kentucky and the Perique right away and enjoyed this blend as a slightly milder Scottish mixture. The only area of departure for me was the persistent and floral background note that was not even mentioned by any other reviewer. This makes me wonder if the German variant (shown in the photo with this listing) has a different aroma from the London original? Not a Lakeland type of aroma, but noticeably floral and persistent from the rim to the heel. I would think that the other reviewers would have noted this. Instead, we get opinions as to fruit aromas. I picked up nothing like this in my London tin. I also agree with reviewer Pipetsud that this is a four star blend, but must take away one star for the unfortunate inclusion of the persistent floral note that I feel has no place in pipe blends.

Age When Smoked: unknown but at least twenty years old

Similar Blends: All quality Scottish blends from the past, but a little lighter..

I bought two aged tins of this a while back while on an "experimentation binge". Although I do not usually purchase or smoke aromatics, the description (high in Perique content) and price enticed me to give it a whirl. After 1 tin, here are my thoughts.

Texture: Tobacco is moist, and I have to scrape away at the tin to loosen enough up to fill my pipe. Attempted to lift coffee filter out of tin, but it was "rust glued" to the bottom of the tin. I don't know if this affected the taste or not.

Pack/Pipe: After loosening enough tobacco from the tin to fill a pipe. (Usually a large Alpha Israeli Galaxy Virgin Finish full bent), I gravity fed into the pipe and tapped to settle. Did this twice more, pressing lightly, and lit.

Light/Burn: Once match to char, and another to get rolling easily. This tobacco burns at an astounding rate. The bowl on my Alpha is approx. 2" deep, and I normally burned through the first 2/3rds of the bowl in about 20 minutes! Nice light fluffy ash that does not stick to the walls. Needed 2-3 more matches to finish, and burns a little wet. (2-3 pipe cleaners on avg.)

1st 3rd: The stewed fruit notes play right up front here. Cool big mouthfuls of white smoke. Can easily take multiple draws without too much heat. This portion of the bowl passes by quickly.

2nd 3rd: Occasionally experienced some ashiness here, and often needed a relight at this point. (I think due to tamping down a third of a bowl of ash in ten minutes!) Lose a little of the top note fruitiness, but it still lingers strong in the background. I feel some of the nicotine here.

Final 3rd: As usual, burn rate slows a bit here, and more often than not, I am not getting much flavor other than ash, with a stewed fruit aftertaste. No problem smoking to bottom of bowl, however, always seemed to leave a bit of unburned tobacco at bottom. (Could just be the pipe). A bit of a buzz from the nicotine content as well.

Notes: Overall, not a bad aromatic. Quality leaf, clean burning and easy to smoke. The flavor is just not there in sufficient quantity for me, and the Perique never really makes its presence known. I guess I'll hold on to the other tin until I find someone interested in a trade.

I tried this blend because of the label which stated a 1:9 ratio of perique (thats 11%!) and a fair amount of virginia. The other component look for is burley in a tobacco of this nature.

When I first opened the tin, I noticed a blend that is quite variegated but the aroma! Man it was as though an entire fruitstand had just attacked my olfactory centers. Just as I was about to contact the center for the prevention of olfactory abuse, I felt that I should leave the tin opened for a couple of hours and see what would happen. Would the exposure attenuate the aroma? Fortunately a couple of hours did the trick. I was also happy to see that the blend had dried out a little.

I packed a Velani Volcano and settled into my wife's backyard swing and set it ablaze (the tobacco, that is). At first, the blend came across as many other aromatics - kind of cloying and sweet, but an amazing thing happened about 1/4 of the way down the bowl - the taste of good VA and Burley started to shine through. The ash was a nice fluffy/white with absolutely no trace of "goo". The walls of my pipe stayed perfectly clear of any "goo aromatica" (you may quote me on that unless you are too embarassed). The blend stayed consistant all the way down the bowl. The dottle did not become harsh for me. In most aromatics, once the casings burn off all you have left is sub-sandard tobacco and a scorched tongue. This tobacco however left me with a distinct feeling that I had found a tobacco that I could keep around for those times when a change of pace is needed.

My german shephard Getchen gave this 3 and a half barks out of five.