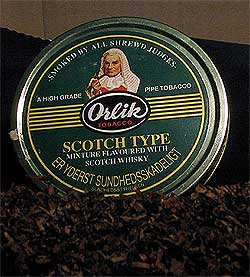 A mixture of Virginias and burley with black cavendish & scotch whiskey added.

I found this blend to be hot, harsh and flavorless. There is a nice smell to the tin, and the cut, though a bit broad, packs easily. It is the smoking experience itself that I found to be less than pleasant.

I prefer my tobacco blends to carry more of a tobacco taste than this stuff. I also like a bit more strength than what this blend delivers.

The virginia base is of good quality, but there is too much sweetened cavandish in the blend to light my fire. Still, if you enjoy light aromatics, I can see where a once and a while dose of this stuff will float your boat. It sank mine! As all veteran smokers know, some blenders put way too much casing in the leaf. And in so doing, causes the smoker to taste too much of the topping and not enough of the true flavor of the leaf, thus, a dummied down tobacco flavor. And that, friends, is the problem with this blend. (No wonder it's being withdrawn from the U.S. market!)

I agree with John Offerdahl's review, except for two things: (1) I rate it three stars instead of two, and (2) I find the Virginias come to the fore throughout the bowl. Also, I disagree with the description of this being a ribbon cut - this is shag.

My three star rating comes by way of my not being a Virginia smoker all that often. Some may rate this much higher. Yes, I will buy it again.

It acts like a straight Virginia, lighting easily and burning all the way with no dottle, but with that beware Virginia tongue bite if you're not careful. It smoked best for me in a smallish meer. To me, the cavendish was absent. It certainly isn't an aromatic or heavily cased - the scotch was added with a very light hand. I respect the shag cut and have begun to appreciate that with the Danish blenders. You're not going to win any slow pipe contests with it, but you won't wind up relighting the bowl repeatedly, either.

I found this still available at a major US internet seller, underpriced, so I'm not sure about the 'discontinued' writing by others below.

Some notes - I got this in 2005 with a bunch of estate tins, found the seal broken in 2011. That makes the 100g tin I have at least six years old, probably more than ten. Prior to discovering the broken seal, I planned on selling it, but the tobacco was in great condition so I've smoked about 2/3rds of it over the past six weeks. Aging helps Virginias. That may explain my higher rating and notice of a much larger Virginia component. The age may also explain its excellent burning qualities.

I appreciate it when people write how often and how much they have smoked a blend. Those reviews which say "this is my first try of this" or "I've never smoked an oriental before this" should be discounted. Likewise with my rating because I am not often a Virginia smoker, preferring Balkans.

Orlik Scotch is a blend of Virginia and burley, topped off with a bit of cavendish and flavored with Scotch whiskey. Because it is flavored, I suppose it could be considered an aromatic of sorts, though it isn't what I would traditionally expect of an aromatic. The broken flake has a pleasant aroma, lightly topped with a scent of whiskey that comes across the sweetness of the constituent ingredients. The tobacco is at a good, ready to smoke, moisture level. With the charring light, the Virginias and burley seem to drive, as once the bowl is really lit. Though the cavendish is present, it never pronounces itself, and seems to be mixed in perhaps as a vehicle for the Scotch rather than as a sweetener. The flavor is more nutty than sweet, and the Scotch comes through as a kind of vague but pleasant tease. I wouldn't advise, to this point, puffing hard on the pipe, but a more gentle smoke will delight the smoker. By mid-bowl the flavor of the Scotch is slightly more noticeable, or perhaps by this point my tongue became more used to finding it. Either way, the flavor is nice. The subtle sweetness of the smoke comes through as an overtone to the Scotch, but to me the burley appears to drive the flavor most. Unlike blends I would traditionally refer to as aromatic, Orlik Scotch does not become bitter or goopy at the end. Rather, the flavor of the Scotch holds up, the sweetness of the Virginia remains, and the sweet nuttiness of the burley continues to drive. I was surprised, and also delighted. I don't think that Orlik Scotch is a blend for everyone. Like the whiskey for which it is named, it is most likely an acquired taste. However, for those who find it to suit their taste it is a good smoke that will provide hours of enjoyment. I would recommend Scotch to both burley lovers and also Scotch drinkers. I expect to return to this blend in the future.

This is a good aromatic for the smokers who can't normally stand them, and yet are looking for one to change things up on occasion.When I first tried this tobacco I have to be honest and say I wasn't very impressed at all. It burned hot, gave me a good case of kentucky fried tongue, and the flavor was not very noticeable at all. After only a couple of bowls, the tin got relegated to the back of my closet where it sat for about 4 months. Looking for something out of the ordinary, I pulled it out one day and loaded a bowl in a good old fashioned corn cob. Amazing what a little time and drying out can do for some blends! This is still not something I could smoke all day, but it had definitely improved. The taste was all tobacco with just a hint of sweetness from the virginias, and a subtle lick of good scotch whiskey. I don't think that this will ever take the place of any of my favorite tobaccos, but will keep it on hand to smoke occasionally when the wife is around or I want something a little different.

Upon opening the tin, there is a faint, yet, distinct aroma of scotch, intermingled with toasted cavendish, virginia, and burley.

The blend packs easily, burns to a dull-grey ash, and does not get gunky, even towards the end of the bowl.

Unlike Strathsprey by C&D, this blend remains smooth even if the bowl is heated up a bit. I have a feeling that this is the result of the burley in this blend acting as a cooling base.

I find this blend a delightful change of pace, and smoke it at least once a week.

I received my first tin of this with the seal broken so it was very dry Therefore my experience may be different from others.

I found this to be a very subtle smoke with only a slight sweetness to it. I did not feel there was an over abundance of Cavendish in this blend, but just the right amount to make this a pleasant mellow blend.

Unlike the reviewer above I found it had a good tobacco taste, after all Cavendish is Tobacco. Yes it's more aromatic than my usual blends like Haddo's and Cairo, but I found it to be satisfying. This is the only so called aromatic I smoke, unless you consider Dark Strong Kentucky an aromatic. I was informed by Gordon at Knox cigar that this blend was being discontinued in the states. So if this is a blend you enjoy even occasionally I would stock up.