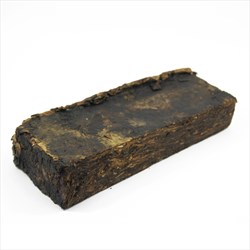 The Samuel Gawith Balkan Plug is the uncut Cake which their iconic Balkan Flake is cut from. This (not so text book description of a Balkan) is made from Virginia with a generous helping of Cypriot Latakia. The thick and dense plug has a wonderful and familiar aroma, think of Full Virginia Flake (or Plug) with the added delights of spicy latakia. To look at this plug has the golden Virginia's found in Full Virginia and a generous helping of Latakia.

The plug may need a little dry time, though I didn't do much of that as I prefer to have some moisture in my tobacco. The Cyprian latakia is smoky, woodsy, mildly sweet, and rich, and is the dominant tobacco. In a supporting role, the Virginia is fairly earthy, lightly grassy, with a hint of spice. It seems a tad smoother and sweeter than the flake version. Has a mild to medium nic-hit. Won’t bite or get harsh. Doesn't have much complexity by design, but it burns clean and cool with a consistent flavor. Requires a number of relights as plug tobaccos will. Leaves a little moisture in the bowl, and depending on how you dry (or if you dry) and pack it, may require a little stirring of the tobacco in the last quarter to burn it all up. Has a pleasant, lingering after taste and a strong room note. Not an all day smoke.

I got a 5g sample of this as part of a batch of other samples, one of those was underweight and this was added as a makeweight. A pleasant surprise that I relished getting stuck into. I'm not normally a fan of samples as I don't think they're big enough to judge tobaccos on and I was only able to get two admittedly decent smokes from., So forgive me if this isn't exactly an accurate review but I will endeavour to do my best.

For once I didn't particulary notice the smell of the tobacco, so no comment there. The leaves are a dark colour and densely packed, quite easy slice off into flakes if desired. It is a little damp so some drying may be in order but this only requires a little more lighting than normal before staying lit for the rest of the smoke. The flavour starts off as one of mild and smooth latakia, it's far from being a lat bomb. It's not too dissimilar to the lat in the largely atrocious SG Navy Flake. This begins mellow towards the middle of the smoke as a mildly sweet toffee flavour begins to pleasantly phase into the smoke. This, in turn, fades out in the last quarter giving way to something more earthy, if mild.

Based on this small sample, this is an excellent smoke that has interesting if mild flavours melding into one another. Somehow, I can imagine this going well with afternoon tea on the lawn on a pleasantly hot summer's day. Definitely worth getting 50g just to make sure.

I will start of by saying "if you want a simple to prepare tobacco avoid this"! The smell coming from the plug is a strong and standard Balkan one, smoky and leathery. The actual plug is of a good moistness but demonstrates its strength in build when it comes to the preparation. I have known a few good plug blends that can be prepared quite easily by vigorous use of the hands but for this one I have to use a good blade! After a touch of determination my pipe is filled and ready to go, despite my frustrations at the amount of prep' time the flavour is more than a compensation!

A very strong/smoky Balkan taste where the Latakia definitely takes the lead and the Virginia emphatically takes the back seat! The smoke is very cool in temperature with a medium nic' kick. The burn (if prepared correctly) is very steady and consistent , all along leaving a pure white ash. For me the only negative with Balkan Plug I can only blame myself for: like an idiot I sliced my finger with the blade during preparation, but I can't hold my own incompetence against Sam G'!

One word, Yum! This IS what it says on the pack. Delicious. Heavenly. Oh hell I have to add more words. A real favourite already

This is a distinctive tobacco for sure. Sweet woody earthy and lightly leathery. Cut 10 mm chunks and then cut them the other way to produce small rectangular flakes then rub them up between finger and thumb. Failing that use a weed grinder.

It lights with a fair flame and heat and burns slow and hot but the smoke is super smooth and cool with a full flavour. The nicotine hit is however mild to my tastes. So stoke some up and cook it down low and slow and relax a highly prized tobacco indeed.

This being my first foray into plug tobacco has been handsomely rewarded. Yes it is a little harder to prepare than ready rubbed or even flake (a good sharp knife is the key) but don't be put off! There's bags of everything here waiting to be discovered...the Latakia comes through wonderfully on top of the background of stoved? Virginia, cool smoking with bags of flavour and a beautifly thick white smoke, a real mature flavour left in the mouth. sit outside on a mild afternoon and enjoy with a huge mug of coffee away from all distraction and like I am now you will be richly rewarded...yes it did require frequent re-lights but my only concerns where if I'd finished the bowl!

Now all I need is to perfect my plug prep and packing techniques.