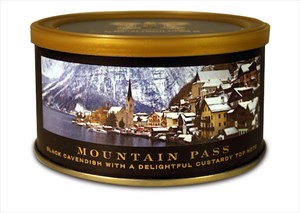 A sugary black and golden cavendish aromatic with a creamy, buttery vanilla custard flavor. By intent, you won’t get much tobacco taste here, except for a touch of honey and grass from the gold cavendish, and light nuts, earth, and wood from the burley. Coarse cut with some ribbon, and lightly moist, the entrancing aroma from the tin translates well to what you experience when you smoke it. Has little nicotine. The strength is mild, while the taste level is a step past the center of mild to medium. Won't bite or get harsh. Burns clean and cool with a rich consistency of sweet taste from start to finish. Leaves a little moisture in the bowl, and requires an average number of relights. Has a very pleasant lightly lingering after taste and room notes. It is an all day smoke. It somewhat reminds me of Boston Cream Pie with a little extra chocolate.

Ok first off I don't understand why those who love Molto Dolce haven't reviewed this tobacco??? It is the closest to Molto Dolce in the Sutliff lineup IE: it is the second most aromatic blend they offer. Instead of Caramel, Honey and Vanilla, Mountain Pass is Vanilla Custard. Think Eggnog, Candy Corn and Butterscotch and yes just as JimInks mentioned Boston Cream Pie!!! . If you have had McClelland's Vanilla Black Cavendish then you know the aroma and this is very similar but this has much much more flavor than VBC. Mountain Pass is listed as a black Cavendish but the two tins I have smoked have been black and light brown strands which makes me think it has Virginia mixed in with the black cav which gives it some complexity, the two leafs change flavor notes throughout the smoke which is delightful. The tin note is truly to die for and being one notch down aromatic wise it might appeal to those that thought Molto Dolce was a bit too much but again being second in the Sutliff aromatic category puts it way ahead of other companies.... Simply delicious and once more pople start trying it I know that it will become a huge hit for Sutliff.

Side note: I just want to thank the folks at Sutliff for really trying to make us pipe smokers happy. I mean really what other company has had the time to conceive and produce hundreds of blends. There is a blend for every pipe smoker in their stable and I applaud both their blenders and marketing dept. for the great labels and descriptions!! Keep up the great work fellas!!!

A black and brown Cavendish ribbon with an aromatics usual heady aroma, this one of a strong vanilla. Came overmoist and needed some drying time but this could also be smoked at tin moisture. I did both but preferred it just a bit dryer.

An interesting blend. In snotty jest, I refer to full aromatics as Goopers, due to their tendency to smoke wet. This was a near-goopless Gooper. There was just a bit of excessive moisture at the bottom of the bowl. And the flavor was everything a heavy aro smoker could ask for, as it takes the typical aromatic flavors and elevates them to richer territory. If you like vanilla and caramel in a tobacco blend, you'll get more of that here than any other blend I've smoked. There is more than a hint of chocolate as well. I found no tobacco taste in this one, and that's by design, I believe. And ok, I admit that my tastebuds are susceptible to the chemicals inherent in heavy aromatics, and this one is no exception. But relative to its rich taste, the chemical side-flavor is minimal. If you don't taste them much in typical aromatics, you probably won't here. I will not smoke this one again, but it's hard not to recommend it to lovers of heavy aromatics, for it's rich flavor and relative reduction of those shortcomings that I associate with the genre.

I have yet to not enjoy a Sutliffe Private Stock aromatic. This blend tastes and smells wonderful, as long as you enjoy vanilla egg custard. If not, you'll want to give this one a pass. If you like their Molto Dolce, you will like this one. Nicotine is mild to medium. Lights well. No bite. Relit well half an hour after I had to leave it. I will get this one again. The flavor reminded me of the hard crust on a creme brule - sweet with a slight touch of char.

Good aromatic for those that smoke them more for flavor/aroma vs. tobacco flavor. Opening tin reminded me of making a box vanilla cake mix as well as taste. Other reviews are probably more accurate likening it to custard. No tongue bite and burns well. Still like Barrell 76 better for flavor and aroma but extremely happy with this.

A very nice aromatic with a prominent vanilla high note, underscored by a delicate toasted Cavendish flavor. There’s good balance here and I notice a mild tobacco note in almost every puff. A gentle tangy quality comes through once the bowl warms, giving a subtle impression of vanilla with dark chocolate.

At first glance Mountain Pass might draw comparisons to Molto Dolce, but the tobacco is not as heavily cased and as a result the aromatic flavorings taste less saturated. However, this is still a rich tasting mixture with notes of vanilla, caramel, brown sugar & chocolate. This is not a fussy tobacco. It’s actually fairly easy to light, especially if left to dry for a spell. The burn is slow and cool and the smoke is smooth, sweet and bite free.

I have enjoyed this tin quite a bit and I was disappointed when I discovered that Sutliff had discontinued it. I contacted them to ask if they produced something similar and much to my chagrin was told that Mountain Pass is currently available as Vanilla Custard Z92.

This is a fantastic aromatic. I was given a healthy sample of this and will finish the last bowl today. As has been said earlier it is vanilla custardy type of essence, but starts with a bit of a licorice taste to my tongue. The smell of this is heavenly and will remain on you for well after you have dumped the ash from the pipe.

It is a moist tobacco, but performs wonderfully. The topping is stubborn and will remain with you through the entire smoke. It has all the makings of a great aromatic. The only thing that will determine whether you like this or not. I really enjoyed this topping and is why I have it rated so high. I preferred this to Molto Dolce although the two perform quite similarly. The topping on MD is just not as much to my individual preference as is the topping in MP.

The only thing I really can't comment on is the room note as I never really smoked any of the bowls of this in the presence of anyone who cared to comment for better or for worse. The smell that I picked up from both the side stream and what was left on me when I finished indicate to me that it must have a divine room note. I will definitely reorder this one for a pleasurable occasional sweet treat.

Let me preface by saying I have not had a good experience trying Sutliff blends. I absolutely dislike Molto Dolce ( yep, I really do) and I have found only two or three blends I care for from them. That being said, I love this blend. The tin note is amazing and the translates well to the flavor. Surprisingly, it is absolutely delicious. I believe not many people have tried it because there aren't any reviews. If you like Molto Dolce, I can only imagine this would blow your mind. I smoke everything from heavy Balkans, spicy Vapers, to extreme aros, so I have a good palate one might say. This blend is a great dessert smoke. As previous reviewers have said, it is a very custardy, vanilla, caramel, Boston cream pie, deliciousness. They described it perfectly. You must be in the mood for a flavor experience because you won't get much natural tobacco flavor here but that's not why I and I believe many of us smoke blends such as Molto Dolce, which again, somehow does not agree with me. Try this blend all you aro freaks. It is quite the hidden gem! Oh, also the description says cavendish so you might expect a tin of slick black cav. Not the case. There is equal amounts of blonde, Brown, black and all colors in between. It is not a black cav blend. That makes me like it even more because there are a million pure black aros. I give this 4.5/5. Try it. Trust me.

Age When Smoked: New and aged for a couple months.

Great smoke!! Caramel comes through the flavor as much as the tin note. Creamy and thick smoke. Amazing room note and finish. Almost too sweet at times. I will re-purchase, but limit it to when I am looking for a dessert tobacco. Crème brulee meets Cavendish.