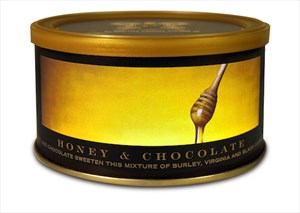 An aromatic replacement for the discontinued MacBaren Honey and Chocolate blend. Basically, all you will taste is honey and chocolate, though I did detect a light golden cavendish flavor and extremely mild vanilla after a little puffing. If you liked the original, you may find this to be a very acceptable alternative. The strength and taste of the blend is potent, and I recommend a small bowl if you’re not used to an intense aro. The nic-hit is just past being mild. Won't bite or get harsh. It may require a little dry time, and the lingering after taste and room notes are very noticeable in a sweet, pleasant way. Requires a few relights, and will leave a little moisture in the bowl. Your neighbors will think you're baking a cake, and invite themselves in for a slice.

This is a delightful fuller flavored aro. Love to smoke this in a cob or my MacQueen Churchwarden. These two flavors are a great go together and best enjoyed on a full stomach as the nicotine content is rather intense. I really enjoy this blend after a meal with coffee. This cavendish is mostly ribbon cut red VA with some toasted dark blended in. The casing as mentioned is a great go together and doesn't completely overshadow the base flavors of the tobacco's. I really enjoy the nutty sweet finish of this blend.

I was given a 2 oz sample of this a few years ago and just recently got around to really smoking on it. I was curious whether this was intended to be a replacement for the Mac Baren H&C and can see that it was. My experience with the MB product was that I despised it. I despised it so much that I sent it to Colorado to a forum friend who liked it. It turned out to be a wise move as my gesture was reciprocated with some Hobbit's Weed, an aro I enjoyed more.

Well, back to this. There is a reason this was put aside for so long. I had tried several chocolate aros in between and did not like any of them. Including SG's chocolate flake, so I figured I would just detest this one as well. From opening the jar in which it was contained, I got a blast of chocolate mixed with tobacco, which triggered memories of disgust. Of course, passengers in my vehicle thought it smelled great.

Upon light up, however, I did not really feel overwhelmed by chocolate at all. In fact, I smoked the whole bowl. Now, I don't want to mislead you. I was not thinking I need to have another bowl of this or anything, but I did not mind it. It is weird, but the more aros I smoke from Sutliff Private Stock, the more I realize there is something similar and it is to my tastes, a kind of anise type taste to many of them. I am not sure if this is a chemical or if it is actually an anise flavoring, but it is not bad. It does tend to distract me from what the intended aroma is supposed to be. In the case of chocolate, I don't think I minded it much.

As for the base tobacco, I will trust they are there, you will not really taste them, but the smell is on the sidestream. The best I can say about this one is that it is smokeable, but I am apparently still not a fan of chocolate aros. I will say that this might be the best chocolate aro I have tried, but don't think that is saying too much as low as the bar is. somewhat recommended.

A nicely done aro by Sutliff. The Honey brings forth a subtle sweetness from the onset. It wasn't until about a third of the way through that the chocolate/cocoa essence was presented - albeit subtly. The palate remains engaged nicely without this being one of those over-the-top aros from beginning to the end. A very nice aro to rotate in. I don't see it as an aro to hit bowl after bowl. But, it does make for a fine break from the norm.

The tin note kind of reminds me of those scratch and sniff stickers from when I was younger. That mixed with a cookie dough tube when it's freshly opened.

The moisture is a teeny bit too much for my preference but it's not goopy. Just stlightly moist and sticky. But these things are expected with aromatics.

The smoke was very mild to me. I thought I would experience more honey but the chocolate seems to be the main player here. It burns well and not too hot. It does tend leave some dottle and will ghost a pipe. I've never tried the Mac Baren version but this was surprisingly pleasant. The room note is very agreeable.

Finally, an aromatic that has some decent strength to it. I did not taste any of the honey, but boy is this stuff heavy on the chocolate. It is an aromatic, but my one complaint here is there is not enough tobacco flavor. Other than that, this stuff tastes great and pleases those around you.

Opening the tin is about the same as opening the oven when baking brownies. Dark, rich cocoa, and the sweetness of honey pour into the room.

No drying needed, this tobacco works great and smokes to the bottom right out of the tin. I typically use the method of pouring tobacco into my palm, facing my pipe upside down, and swirling it over the tobacco until it wont take any more. This has worked perfect each time.

Upon the light is Honey and Chocolate. It stays long enough for you to get to know it, and be done. After comes deep rich flavors of high quality tobacco. Robust burly and virginias take you to the end of your smoke; satisfying even the anti-aromatic smoker.

This is a nice aromatic. The honey and chocolate are subtle, but can be distinguished. Nice room note and mild smoke. One of the better Sutliff blends in my opinion.