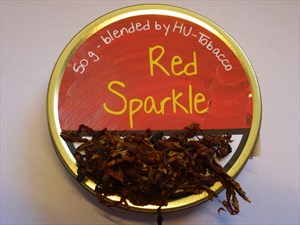 The Red Sparkle is a loose cut blend of different Virginias, Kentucky tobaccos and a touch of perique. A subtle licorice casing gives this composition its pleasant flavor. Red Sparkle is an uncomplicated and pleasant sweet and spicy blend for all times of the day.

After a bad start with this tobacco I finally got to taste it's true nature. I got delivered a tin, that was so dry, that the first layer of tobacco crumbled to an ash-like consistence. HU apologized very friendly and send offered me a tin of another tobacco (Scotney which I reviewed yesterday). Also they acted quickly and took all other tins of Red Sparkle in stock out of sale, because it had to be a production-mistake they said. Shit happens. But thank you a lot for the friendly and personal support @HU-Tobacco

I "brought this tobacco back to life" with a moistening clay-coin in the tin for several days. A bit of it I had to toss, because it had crumble in first place. No problem, there was plenty left, as the tobacco comes in a 100g tin thats completly full! I guess it's because of the fluffy Ribbon-Cut.

The tobacco comes in a ribbon-like cut, with some ribbons being pretty long. Interesting, appetizing cut imo. The tobacco is supposed to come with pretty low moisture as I got told. Ready to smoke right away.

Tin smell isn't licorice at all to me. It's sweet-fruity, with a slightly sour note in the back, but very decent. All in all pretty tasty. Smells like an real heavy Aromatic in the tin - but the smoke is a bit more gentle flavouring-wise.

Packing, lighting - no problem! Once it burns it delivers a full (in terms of different flavours), fruity and woodsy, slightly smoky taste. A slightly woodsy-sour and sweet flavour prevails. A bit spice and tangy from the Kentucky by times, but very rarely. A tad of fruit if youre looking for it. There's not really any Perique to be noticed - sadly!

On top there's this "licorice"-topping, which I can't identify as licorice, nor define it at all. The topping is somewhat fruity-sweet with a slight sour note to it, that is pretty tasty for a while, yet very artificial. The topping harmonizes excellently with the tobacco taste and kind of supplements the natural fruitiness of the tobacco. Kentuckys are the most dominant note of the tobaccos, as it's hard to identify any other than the flavouring.

The taste really deserves the name "Red SPARKLE". It's a sparkling, slightly piquant. Maybe some real licorice flavour would expand the taste even more for me, because I love licorice, but its good as it is and it's no neccesarry change I'd make.

An OKAY blend for my taste, which I can enjoy by times. It's well made, the flavouring isn't gross or something, but very artificial and hard to describe. Yet tasty somehow. Other times I stick my nose in the jar and think "how the hell can you smoke this?!".

Deserves 3/4 stars for a really unique and well crafted blend. There's definetly an audience for this! Personally I changed my palate in the meanwhile and really can only smoke aromatics like this a few times the week at maximum. Definetly worth a try, as it's interesting at least!

Also I want to emphasize the friendly and personal customer service of HU (Albert Bosch) Tobacco.

UPDATE: I had only smoked this in my Clay Pipe before, but yesterday I tried it in my new Meerschaum Pipe. In Meerschaums, the casing is more in the back and the Perique finally pops out. I guess thats because flavourings stick to the condensate - which is mostly absorbed by the pipe when smoking a Meerschaum! So I guess, that tones down the flavouring/casing and pushes the Perique, and especially it's peppery note in the front row. I prefer it in Meerschaums by now.