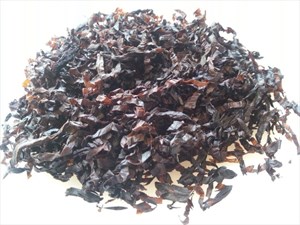 {Pipesandcigars.com description} Rare and precious, this dark, fragrant condiment tobacco comes to us in wooden casks from St. James Parish, Louisiana, where it has been produced in time-honored fashion since the days when the natives pressed it in tree trunks. Use it sparingly in your blends for its distinctive cooked-fruit, musty, mushroom-like aroma and cool-smoking character.

Notes: Add 5-20% of this uncased condiment tobacco to add flavor to your favorite blend.

Great stuff, and a real bargain compared to Jewel at a fraction of the price. I tried a homemade VaPer with some Red Ribbon - about 12 per cent - and it was consistently good all through the three ounces or so that I had.

I'm reviewing this as a blending tobacco, which is its intended purpose. I recently purchased a pound of it from P&C. What I received was an unopened bag of Sutliff TS-20 Louisiana Perique. So that's what I'm going to call it.

Over the past month, i've used Sutliff TS-20 to make several of my own blends, as well as to give a flavor or nicotine pick me up to commercial blends that, IMO, needed it. The results have been universally positive. In addition to giving a welcome Vitamin N boost, TS-20 improves the flavor of just about anything you add it to.

The flavor spectrum of perique ranges from rich and plumy to tangy and spicy. Sutliff TS-20 falls very much on the plumy side. As a result, it can be used in fairly high proportions (up to 30%) without overshadowing a milder flavored tobacco like a lemon leaf Virginia. Yet, it is sufficiently flavorful to be noticeable in a stronger blend like a Latakia heavy English. That said, unlike some blenders (Latakia, dark-fired), TS-20 won't change the flavor profile of the blend to which it is added, even when used in relatively large proportions.

As with all periques, Sutliff TS-20 is a strong tobacco. So be aware that, even in lower concentration (10%), it will be felt. As delivered, TS-20 is also a moist tobacco. However, given that you will be blending it with other tobacco, this usually won't present an issue.

Sutliff TS-20 is a meidum length ribbon cut, so it blends better with other ribbon cut tobaccos than granulated perique. It's also easier to use than Cornell & Diehl's long cut perique. And, at just over sixty dollars a pound, it's very affordable.

I was very impressed with Sutliff TS-20 Louisiana Perique and would highly recommend it to anyone interested in experimenting with perique. If you're a fan of sweeter VaPers, try bleindng it with Sutliff Matured Red Virginia 515 RC-1. Or add it to your favorite straight Virginia to make it a VaPer. However you use it, you can hardly go wrong.