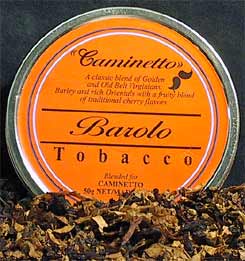 Classic blend of golden and Old Belt Virginias, burley, and Orientals with a fruity blend of traditional cherry.

It tastes like you accidentally set a Jolly Rancher on fire and decided to eat it anyway. You pipe will taste like you used it to bludgeon the Candyman for at least a month afterwards. Stay away. 'You hear me? Stay away.

Normally I like to write longer reviews but this blend doesn't deserve it. It's aweful, truly aweful. You know how when you go in to the men's room and smell that aweful cherry disinfectant? I'm pretty sure that's what they are using to flavor this. The smell is there but I keep wanting to scrub my mouth out with a toilet brush just to improve the hideous taste this leaves behind. A toilet brush could only be an improvement over this. This not only has no cherry taste to it or tobacco taste to it, but it has no earthly taste to it. I think it's demonic. I pray that those who will go to hell are not punished with having this taste in their mouths for all of eternity. I am also hoping it will come out of my pipe.

A strange compilation and certainly a blend that helped Caminetto end its foray into the tobacco business years ago. Barolo was loaded up with Cherry, not enough to make you think of Luden's, but certainly enough to wash out the Orientals and Virginia to the point where I gave up with a third of the bowl to go. Not hot, just sweet cherry that obliterated any sort of decent presentation. I don't think aromatic fanciers will go for this one either. Good thing its long gone.

Yes, this is an aromatic, but a very classy one. On a scale with Lane's Very Cherry on one end and Middleton's Cherry Blend on the other, this falls comfortably in between. More real Cheery flavor than the Middleton but not the Vick's Nyquil/ Hall's Cough Drop style of the Lane. The quality blend underlying the light casing can be discerned. Enjoyable. It does have a creeping nicotine hit that will sneak up on one, not too heavy but enough. Only thing keeping it at 2 stars instead of higher is price alone as it is not that superior to Middleton to support 2 to 2.5 times the price (but I might buy a tin if I can find it- this review based on sample bags). I could not make it bite, btw.

I hope this doesn't come as a surprise to anyone, but this tobacco is an aromatic. I seldom, rarely, never smoke aromatics. I stopped by my local cigar store, formerly a tobacconist shop (sigh) to by some pipe tobacco. For a long time I saw these Caminetto aromatics, Borola and Como, collecting dust. So I bought a corncob pipe and those two tobaccos. You know neither taste like an English, Balkan, Scottish, straight Virginian, VaPer, Virginian/Burley nor straight Burley. Well cut off my legs and call me shorty! It is a fruity flavored aromatic and you know I liked it. The quality of the various tobaccos is quite superb. It isn't sticky from Prop Glycol or heavy casing or topping. And yet despite the forward brassy cherry aromatics I tasted, faintly, great tobacco. I'd like a bit more strength, but you know; it's not going to replace anything in my regular rotation. It does not bite at all, burns clean to a fine ash, and it doesn't seem to clog a pipe. A friend said, "What the hell are you smoking... It smells good." For what I generally smoke doesn't offer a people pleasing room note. So, on a lark I?m momentarily really enjoying this aromatic. It is almost like eating some over the top dessert. So if you are in a more stoic somber dark mood, stay away from this nicely crafted tobacco.

Tobacco or potpourri? Was this blended to smoke or place under the seat of your car as an air freshener? Upon opening the tin the room was filled with the aroma of cherries (amaretto) or something to that effect. When I came to my senses after the olfactory burnout I noticed that there was actually tobacco leaf in there. The leaf in this blend I think was put through a tree chipper and caught on the opposite side in tins before packaging. I must say although the blend was presented in large pieces of tobacco leaf, it packed nicely into the pipe and was quite easy to light tamp and relight. The burn was even and the mixture soon became a soft gray ash. As I puffed very slowly (to do otherwise would sear your tongue) the cool Burleys and sweet Virginias began to whisper thier presence only to be silenced quickly by the Cherry Monster or is it the Amaretto Queen! I've tasted many cherry blends in my years of smoking and found them to burn rather warm but never have I had one burn as hot as this one. And I sip my pipes as I smoke! The only redeeming factor of this blend is the room note is tolerable and some may find it nice on a cold winters night.

This is not a bad tobacco but nothing spectacular either. The cherry flavor is somewhat different than most of the other cherry tobaccos I have smoked. I suppose this is more of a maraschino cherry flavor than a black cherry flavor. Try it if you like aromatics but watch out, it can get a bit hot.

Much similiar to Como except it has more of the cherry flavor. Another good dessert smoke, but, will bit your tongue if you puff too hard.