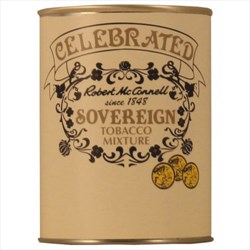 A blend prepared and cut by craftsmen in a factory steeped in knowledge and experience. The unique latakia of this blend is carefully matched with Turkish Dubec leaves to establish a first bouquet. Cool smoking and maturity are then assured by an equal proportion of jet black cavendish which has matured in "Scotch Presses" capable of heat and pressure. The addition of bright Carolina and red Virginia imparts their mellow nutty flavour and the blend is completed. A connoisseur's blend for those who are seeking the finest in latakia mixtures.

First off, i´m not a everyday smoker. I tend to smoke during the summer months of the year. And i just love the corncob pipe. So this summer i bought myself a new MM corncob and opened this tin that i have had stored for one year. I begun my "pipe-journey" with aromatics witch seems to be a first step for many young pipesmokers. That was ok for a while but you get tired of this sweet-dripping-candy-smoke, so i wanted to try what the more experienced smokers had. And that was Latakia. Oh, that tarish-wooden-smoke took me to a new level in pipesmoking. So i bought several diffrent latakia mixtures - SG Squadron leader and Peterson Old Dublin to name a few. But these didn´t really fit what i was searching for. But i did find it in this mixture. I´m not that of a expert in judging what taste more than the other in a mixture, but i can say that the latakia is in a perfect balance with all of the other leafs in this tin. During the month of july this summer i have smoked a 100g tin in a corncob and i want MORE of this mild latakia mixture. It´s not strong in taste but not weak either. At the end of a bowl it tends to get a little hot, but thats probaly me puffing to heavy. It lits easy and burns whitout a stop. I highly recomened it to beginners in the latakia-jungle just because of the mild taste it has.

Having recently gained access to the various blends under the Robert McConnell name, I obviously had to buy this one, given its tin description.

The 100 g tin is of the dreaded baked-beans style, but for Mixture-style leaf that is acceptable. Opening the tin, I get a good waft of both sweetness (BC) and savoury smokiness (Latakia); the VA is a bit lost in that double onslaught (but it will make itself felt later on).

The colours are about equal amounts of black and yellow, with a touch of grey-ish Orient in there. The cut is to the standard of most english mixtures, so stuffing is easy, as is lighting.

The smoke starts out with an astonishing amount of sweetness; not really what I had expected of a blend that is advertised as a perfection of English; it feels more like a Scottish Mixture during the first third or so. But then the Latakia and the VA kick in, giving a deep, smoky sweetness that makes this a really good blend for the English-style smoker; a bit of a cross-over between English and Scottish.

I like it enough to recommend; I tend to sip a dram or two of a peaty Scottish Single Malt to go along, preferrably something from Islay or the Orkneys.

The smoky, woody, earthy, musty, leathery Cyprian Latakia is the lead component. The Turkish Dubec provides a lot of earth, wood, vegetation, mild spice and smokiness, a little sweetness and some sharp sourness, with a moderate incense-like floral quality. It is an important supporting player. The sugary, toasty, creamy black cavendish is a secondary star. The tart and tangy citrusy, grassy, floral, lightly spicy, sugary bright Virginia is a little more obvious than the red Virginia. The aspects of the latter varietal are tangy ripe dark fruit earth, wood, sugar and bread. The bright Virginia is just above being a condiment, while the red Virginia is one. The strength and nic-hit are a couple of steps past the center of mild to medium, and the taste is a slot short of the medium threshold. No chance of bite or harshness, and sports few rough notes. Well balanced and mildly complex, it burns cool and clean at a reasonable rate with a very consistent, rich, fairly smooth and creamy sweet, savory campfire flavor that translates to the pleasantly lingering after taste, and slightly stronger room note. Leaves little dampness in the bowl, and requires an average number of relights. Can be an all day smoke.

As the manufacturer's suggest, this is a blend for the true connoisseurs of pipe tobaccos. Celebrated Sovereign is a delicious and delightful 'old fashioned' style mixture which has been perfectly balanced to provide a truly exceptional smoke. If you enjoy blends such as Samuel Gawith's "Squadron Leader" or Stokkebye's "Balkan Supreme" then you are going to find that this Sovereign, having slightly less of a Latakia prominence, is a right royal smoke!

This seems to me as a kind of twin brother of Robert McConnell's the Original Oriental. Somewhat less heavy on the orientals, and a bit more black cavendish taste, but quite similar after all. If you like the Oriental Mixture by McConnell you will like this one, I guess.

Another great blend by McConnell. Very similar to the original oriental but a little sweeter. A true Scottish. I have to say that when you let it mature properly it becomes sublime