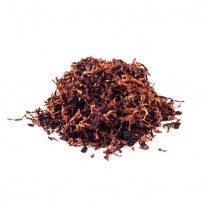 In flavour and aroma this strikes a neat balance between traditional Dark Virginias and aromatic tobaccos. Rich and satisfying.

This was the first tobacco I ever smoked, as recommended by Frederick Tranter's, and I loved it. It's still my all time favourite and it has just about everything I look for in a good tobacco: flavour, complexity, room note and mellowness.

Depth and complexity from good quality tobacco, especially the Cavendish which gives it a fermented almost alcoholic aroma. Sweet fruitiness from good quality and well balanced flavouring that doesn't overpower the tobacco. A fantastic room note and a long cool smoke with no tongue bite.

Those who prefer their tobacco very strong or free from any flavouring will obviously not take to this one, but I would urge anyone who enjoys a top quality aromatic or who just wants something with a good rounded flavour to give it a try.

When first purchased it's often a little wet and can clump together in the bowl so I let it dry just slightly and then it packs and lights perfectly.

Age When Smoked: fresh, but improves with very slight drying

25 grams bought loose from the Tranter B&M shop in Bath. Sold in tip-top condition, neither too dry nor too moist. Pouch aroma is delicious - a complex mix of fruits, vanilla and fermented tobacco. Appearance is broken flake with lots of dark leaf.

Packs and lights very well. Stays lit with no fuss. Mine smokes very cool with no tongue bite. I think moisture content is key - the other reviewers here seem to have received wetter portions than me.

It has that sweetness when drawn over the tip of the tongue that I enjoy in aromatics. The vanilla comes through quite strongly in the smoke, but the fruit does not.

The underlying virginias have a pleasant sour, fermented quality, but I feel this clashes with the vanilla. As a vehicle for the flavourings, the base tobaccos are a bit odd. Strange bedfellows! That said, this is a very pleasant blend. One the aromatic lovers will definitely want to try, and perhaps one the VA fans may wish to challenge themselves with.

As an aside, it's great to see the Tranter shops in Bath and Oxford are thriving under new ownership. Havana House (the new owners) are, funnily enough, cigar specialists, but they are keeping the pipes and snuff side of the business going. Well done them.

The dark Virginias provide a lot of dark fruit, some fermented stewed fruit and grass, a hint of citrus and spice, smoke, wood, and a bit of earth. I think a little brown sugary black cavendish is present as well. It’s hard to define all the toppings, but there’s some vanilla, a little fruit, and something with an alcohol base, all of which offer some richness. They sublimate the tobaccos to a fair extent. The nic-hit is mild. Won’t bite or get harsh. Burns clean, and slightly warm on the tongue at a moderate pace with a deep, very consistent flavor. Leaves a little moisture in the bowl, and needs a few relights. Has a pleasant, slightly lingering after taste. Can be an all day smoke. Three and a half stars.

Frederick Tranter-Comfort Of Bath. I am a touch perplexed as to why it doesn't state there's any added flavours in this, just the nose from the pouch has a strong aromatic addition. I would say, going on the pouch note, it has to contain alcohol of some sort.

The mix is made up of a large amount of dark brown strands with quite a few jet black ones. Like a touch of black Cavendish.

The mixture contains a good amount of water so it doesn't need drying but can be smoked right the moment it's opened.

The smoke? Delicious. The alcoholic taste is nowhere near as strong as I expected it to be. Instead of alcohol taking the lead it's a vanilla flavour that takes this position.

The smoke is this way until about ten minutes in. At this point a sort of creamy/chocolate type of taste comes through.

The final taste to come through is a mild, sort of aniseed one. This isn't too strong though.

This is a very easy to smoke blend where tongue bite is concerned. It simply doesn't give any at all.

It creates quite a large amount of smoke. It's very pleasant to smoke as it's cool, tasty and bite free although it could possibly be considered irreverent if there were other people in the room!

Comfort Of Bath is pretty light in nicotine. It's would definitely suit both newer smokers and flavour only smokers well.

The burn is a good one where consistency is concerned. It is one of those blends that doesn't want to go out!

I enjoy this a lot more than I expected. Mind you, I had little expectation for it as it's not too popular!

So this is an aromatic from the Frederick Tranter blenders, who run the online Cigar Connoisseur shop. I'd heard whispers about this tobacco as though it were some hidden secret that I possibly shouldn't publicize lest it be hoarded by greedy tobacco stockpilers. But having tried it, we needn't worry about that so much. It isn't the Holy Grail; what it is, is a very nice high quality aromatic tobacco with a jolly British name and a solid history (apparently Tolkien used to puff it occasionally). The casing is quite heavy, but it's clear that good quality tobaccos have been used. It's like something the Lakeland blenders would come up with, so if you like their aromatics then you'll probably dig this. The flavour of the topping falls somewhere between a Danish-style vanilla and a British-style OTC, and the pouch aroma/room note is of the lovely "grandpa's pipe" variety. Medium nicotine strength, ships rather moist as is usual for British tobaccos, burns well when dried and rubbed out a touch. Not for the fans of unflavoured 'artisanal tobaccos', but aromatic fans who can get hold of it will probably not regret giving it a try, and might even fall in love with it. I sort of have.

As a rule, I am not a huge aromatic fan, but this blend is a wonderful find. I have long sought after that Pipe Smoke smell from years gone by and this is so very close to that. It has all been said in the previous reviews about the taste and behaviour of this tobacco (which is excellent). I just wanted to add my voice to the few here saying how good it is.