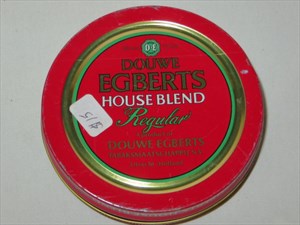 Although I liked the aromatic version just a bit better as I really enjoyed the mysterious flavoring, the Douwe Egberts House Regular was still a tongue tingler and I sure wish I could get it on a regular basis. It would definitely be one of my staples. For those of you who have had the pleasure of smoking the old Dunhill blend, Ye Olde Signe, this one is actually quite similar. It has a fine shag cut, is packed tightly and smells rather unpretentious before lighting (and after, as a matter of fact). Unlike Ye Olde Signe, the moisture content, despite 20 or so years in the tin, was still quite high in this one, yet it needed no drying out. A burst of deep, dark Virginia flavor overwhelms at first light, but then settles into a stately smoke of old world dark Virginia flavor that can't be found nowadays. The flavor is semi-sweet, and packs a nicotine wallop. It doesn't left hook you, but does slap you around a little. I guess I like being slapped around because I really like everything about this blend.

The substitution for the tin description (which I lost!) that I used when I added this brand could be considered part of my review. I will also write the same review for both the regular and aromatic. This might put some people off, but I have discovered through smoking a lot from both these probably 40 year old tins that the regular had a topping similar to the aromatic, but the toppings have faded to the point that I can tell they were there, and in each blend, they just kind of fade into the old mustiness, and as far as I can tell, by now the two taste about the same. I'm glad I didn't review these right away: I was really taken aback by the novelty of this old weed at first, and smoked a lot of it, which finally became enough to realize that there were and are faults. I see no reason to go less than "recommended," though. Unique blends in their way, and historical in that they seem to be the only blends by DE that actually bear the company name (now Sara Lee!) on the tin.

Must have been an attempt to create a "classy" tinned blend or two in what was probably the early 70s. The tin insert I eventually lost waxed poetic on the exotic nature of the constituent tobaccos, but I'm not sure they were exactly top quality. This has not aged like a McClelland. Also, it is true shag, like an all-purpose OTC cut. One could easily roll a cigarette from it, though an interesting one to be sure! Smokes fast. Not at all offensive, though whatever was in there tobacco and flavoring-wise has melded into fermented historical mustiness, giving one the impression of being in an old library, though what section, I'm not quite sure...

I still have plenty of this, since though I smoked a lot at first, it's kind of showed me all it can show me at this point. It is nice for a quick bowl (burns fast and no nicotine, not that I would notice, anyway), and I do plan to try a cigarette rolled from it. The cut suggests to me that this might have been part of the original intent: a dual-purpose OTC, but in the traditional round tin. There are probably a few more tins out there, since I still see them pop up on Ebay. Don't pay too much, but if you can snag one, it's worth it for the history and a sort of old-new novelty. Just keep in mind that this has not aged like a fine wine. The individual tobaccos making it up are hard to pick out at this point, but certainly decent yet unremarkable international Virginias and Burleys, perhaps an Oriental as they said. Cyprus? I strongly doubt there is Latakia in here.

Edit: I may have been a bit harsh in a couple places in my review. I smoked my first tin really fast, every day, and probably just got tired of it. Revisiting it, it's pretty good. I still think there are some faults; it's no McClelland, but I'm enjoying this bowl. One can still smell a fruity aromatic topping to the Regular just as much as with the Aromatic (as I noted), but it smokes with only a very light flavor. I think this is best in a huge pipe like this Marxman Jumbo I'm smoking it in now(which is an attractive pipe among all the hacks in my stable) and I will continue to enjoy this, just not every day. Not all that musty like my review said, but the tobaccos still don't taste as exotic and rare as the tin insert bragged so eloquently about.

Edit 7-11-12: You know, recently I've found another use for this stuff. Trying to keep from smoking so many American Spirit Blacks and smoke the pipe more (somehow, in the warmer months I backslide into cigarettes the most), but I also bought a few bags of filters and one of those basic cigarette rollers, and this old stuff rolls almost as good a cigarette as an American Spirit! Smokes a bit faster (as hand-rolleds can tend to do) but it is a perfect shag cut, and tastes good in a cigarette, so this may have been the original purpose of the blend; an all-around that could be used in the pipe or rolled.