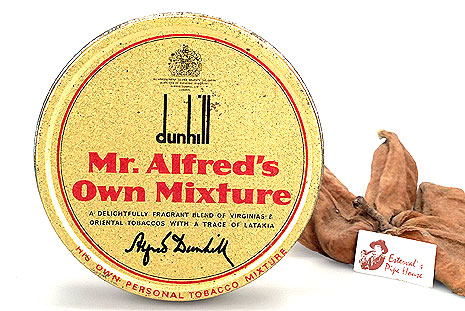 One of the original 'English' mixtures, but it remains very popular. A mellow medium blend of Latakia, Cavendish, Virginias and Oriental Leaf, with added Havana filler leaf to give it 'zest'. Available only at the Dunhill store.

I've had many old fashioned concoctions, and this is certainly on my "best ever" list. The added Havana leaf from the original Mr. Alfred's own (gold tins), continue to sparkle and mellow quite nicely after years of aging.

If you enjoy latakia, Cuban Cigars and scrotum tingling Orientals, this is your ticket! The newer Mr. Alfred's own that was recreated at the Dunhill store using the original recipe is tasty, too, and an exact duplicate.

Notes: From the moniker, one would suspect this was Mr. Dunhill's personal blend, and certainly it is complex enough to support this idea. At any rate, it's no longer made, now that Murray's has shut its blending house doors. So if you find some of this, it will be a matter of luck. One less cigar leaf blend in the world. Ah well...

Anyway, I have smoked several ounces of this from various vintages in several pipes. It is the same in most pipes, although I prefer a briar.

Comparisons: Amongst the cigar leaf blends, this is the most complex, and the least cigar-dominated, to my palate.

Bottom Line: For lovers of English blends and cigar leaf blends who seek a medium-bodied Virginia blend with just enough English elements and cigar leaf to give it body and spice.

The fragrantly floral, earthy, woody, vegetative, rather sour and very spicy, mildly buttery sweet, herbal, tangy Orientals are the lead components by a very small margin. The mildly musty Syrian Latakia provides smoke, wood, earth, a sweet red wine-like essence, light leathery notes, and some floralness. It is a strong supporting player. The fermented, smoky Havana leaf offers herbs, earth, wood, a lot of floralness, vegetation, some sweetness, a few spice, nuts, tea and grass notes. It is a condiment that plays above its percentage in the mix by a couple of steps. The aspects of the fermented Virginias are tart and tangy citrus, grass, sugar, floralness, bread, touches of tangy darker fruit, earth, wood, and spice. They play a secondary role, right behind the cigar leaf. The unsweetened cavendish provides light smoothing sugar and toast. The strength and nic-hit are a couple of notches past the medium mark. The taste is just past the center of medium to full. There’s no chance of bite or harshness, though you will encounter a few small rough edges. Well balanced, deeply rich and very complex, it burns cool and clean at a moderate pace with a mostly consistent, sweet and sour, spicy, savory, floral campfire, zesty flavor that extends to the long lingering, pleasant after taste. The room note is a bit potent. If you dislike your mother-in-law, buy a tin, and she’ll leave quickly. Leaves very little dampness in the bowl, and requires an average number of relights. Not an all day smoke, but it's one you'll repeat.

From the smell in the tin, I was expecting a stronger Latakia taste: no, this is actually more similar to Dunhill Cuba with just a sprinkle of the smoky black leaf... The cigar leaf is in the correct amount for my taste (albeit, not too much of it and not harsh), and has a lesser impact (taste and nicotine wise) than in GLPease Robusto, which on the other hand is a more personal and tasty tobacco while mantaining several points in common. Personally I think that if I want a Latakia blend with cigar leaf, Fox Banker's mixture is still VASTLY superior to both Alfred's Own and Robusto: rounder, sweeter, rich, warm and rewarding. This Dunhill offering, only available at their London store, is decent but not memorable.

I wonder if Mr. Alfred's Own was actually Alfred Dunhill's personal blend. The mixture was first commercially introduced in 1971, and at the time was described as "a full bodied Balkan blend, rich in taste, smooth. Turkish and Virginia with a trace of Latakia" (1977). Later, the description from the London store was altered to read, "A mellow medium blend of Latakia, Cavendish, Virginias and Oriental Leaf, with added Havana filler leaf to give it ‘zest.'" Mr. Alfred's Own was discontinued from wide distribution after the 1970s, and afterward was only available from the London store--until the London-shop-only My Mixture blends were finally discontinued in the early-2000s.

I just finished my last tin from a shipment I received back in 1999, so this review is based on well-aged tobacco. When I opened the tin, the paper cover on top of the tobacco was heavily stained. The mixture's color is predominantly dark brown, with some lighter greenish strands, along with scattered shards of jet-black Latakia. Even after 17 years, the moisture level was still perfect. The smell was rich and deep, with the mustiness of the Orientals and the spicy, cedar notes of the Havana leaf being the most pronounced.

The Virginias contribute notes of a dry red wine, the Cavendish adding a subdued, burnt brown-sugar sweetness, and the somewhat mellowed Latakia imparting a smoky background. The slightly sour florals of the Orientals and the wood and spice and cedar of the Havana leaf assert themselves in the forefront of the side-stream aroma and taste.

I have read rumors of the immanent return of several discounted Dunhill blends, and I hope that Mr. Alfred's Own will be one of them. The mixture was not only one of Mr. Alfred's favorites, it is also one of mine.

I was lucky enough to get a tin of this from London, and was quite taken with it. In appearance, it is exactly like othe Dunhill blends, a fine ribbon cut of assorted colors. The aroma was that of a medium-full English blend with a trace of cigar leaf.

The flavor is exactly like the aroma, a wonderful hybrid of an fine English blend with a maduro cigar. The Va. provides a full sweet base, the Oriental provide spice, the Latakia adds that smokey pungent flavor, and the cigar leaf brings up the basso notes. Just perfect.

Comparing it to other cigar leaf blends, it is much closer to J. J. Fox Banker's, than to G. L. Pease Robusto. If you can get some, by all means try it.

I used to get pissed off when I would read rhapsodic reviews of tobacco which was not available in the USA. Now that we live in the world economy, however, I feel justified in posting a review of this tobacco which is only available from the London Dunhill store near Saville Row. Besides that, I love this stuff! This is a medium to heavy latakia blend which contains some unflavored Cavendish and Havana cigar leaf. It has that fine cut common to all the Dunhill blends which makes them pack and burn easily. The tin aroma is similar to 965, but less tangy and more spicy. I definitely notice the cigar leaf aroma upon lighting up, but it is not overpowering and it never becomes rank like an actual cigar does. The flavor is of a medium Dunhill blend such as Early Morning Pipe, but also contains a bit of that uniquely sweet Havana cigar flavor. Repeatedly smoking this blend in the same pipe brings out the cigar flavor much more. It burns completely to a fine white powder. I smoke this blend in the same pipes in which I smoke 965 and find they all get along just fine. While the flavor is full, it is also fairly light in nicotine, something which I found pleasantly surprising. When I can't decide between a pipe and a cigar, this is the obvious choice. It is also the only blend I have ever tried containing cigar leaf which I enjoyed. Available only from Dunhill, London, England.

This is certainly my favourite English blend so far. It is smooth, rich and balanced, the latakia does not overwhelm, and the cigar leaf adds a certain sweet tang which makes it stand out among other English mixtures. The nicotine strength is fairly restrained. Whenever I smoke it, I realise afresh why Mr Alfred made it his own.