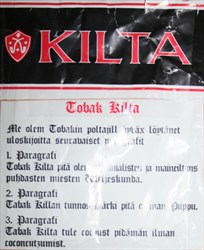 Pure tobacco taste with a hint of tar flavor.

I'd like to start by stating that very few things told here about this weed are completely and utterly misguided. Black cavendish? Get out! Alcohol/Liquor? Get out! Really? Has the person who wrote that dung ever actually tasted this?

Kilta used to be a great tobacco. I bought my first pouch back in 1978 when it was still made by Rettig company. Back then it was a ready rubbed virginia-burley with a tiny touch of latakia and a little bit of that fresh wood tar flavoring all Finns learn to love before their first birthday. After the brand was sold to frenchies the manufacturing was moved away from Pietarsaari, and everything went to hell. The cut got thinner and the whole recipe was altered to match an average rolling tobacco. It still had a bit of that lovely tar flavor to redeem though.

Today I bought a pouch of Kilta, and I must say I'm deeply saddened. The cut has been updated to even finer shag, and there's nothing to make a distinction between nowadays Kilta and Pall Mall rolling tobacco. I'm not even going to put this in my pipe, but I will gift this to a friend who smokes paper.

R.I.P Kilta. You were a dear friend for years, now you are no more. I gave two stars because of its glorious history, but today this can't be considered as a pipe tobacco at all.

Wow - talk about a trip down the memory lane! Kilta is probably the very first tobacco that I stuffed down the bowl of my very first pipe for my very first pipe smoke :) (It's either that, or Clan.) I remember the front of the the pouch being not artistically very appealing and having some imaginary text in a gothic-style typeset by some supposed "tobacconists' guild", hence the name (Kilta = Guild). Kilta was once the bread & butter of pipe tobaccos in Finland and any small kiosk in the countryside would have just two types of pouch tobacco: Kilta for the pipe smokers, and Aroma for the hand rollers.

Unfortunately, I don't remember it as a particularly good pipe tobacco, even back then. The consistency was fairly fine shag, almost like rolling tobacco, and it was pretty dark, almost black at times. In my memory, the pouch and room note were absolutely wonderful but that doesn't really tell us anything as being a beginner then, any pipe tobacco would probably have had the same effect on me. (That said, if the tar was properly present in it, it may very well be absolutely true.) I remember the moisture level of this tobacco being particularly problematic; it was often way too moist to be smoked straight from the pouch but on the other hand, once it started to dry it did so really fast even in a carefully closed pouch and then it burned like tinder, producing a very sharp, irritating smoke; I was always hoping for a "good" packet that could be smoked straightaway and then very carefully sealed to retain the moisture, without any attempts to control the moisture levels after opening.

I'm giving it 2 stars now mainly for old times' sake but to be honest, if by some miracle I got my hands on a pouch of Kilta now, I'm afraid it might just as well be 1.

One and a half stars. The cut is almost as thin as cigarette tobacco, so it doesn't come as a surprise that it burns hotter and faster than most pipe tobaccos. At its best Kilta tastes flat but not too unpleasant.

If you find yourself in Finland and you feel the desire to explore finnish bars and their beers, loading your pipe with Kilta will allow you to have a quick, casual smoke outside (you can't smoke inside anyway). But you'd have to lie if you were to boast to all the cigarette smokers that their pathetic cancer sticks couldn't compare to your pipe. Just like them, all you will get is a nicotine hit and probably a bad taste in you mouth - especially if you let it burn too hot. A few times my pipe started to emit very dark and foul fumes and all I could taste was tar.

When I went to Finland this summer I just had to fast a local pipe tobacco and Kilta was the only one I found. Otherwise the swedish match brands are the most sold in Finland.

However, the fast of Kilta is not bad... It's an ok taste, a pure and clean tobacco taste. It burns quite hot and fast though and the cut... It's probably the thinest cut I've seen, almost like rolling tobacco, I would have preferred it a bit wider.

* Strength is hitting a medium for me... It's not knocking me flat but its not mild either.

*Taste and flavor is as I said ok. pure tobacco but whit a small hint of tar in the background.

*Room note... Well let's just say that my wife sent me away to sit far away from her so I guess it's not the best room note.

*Recommendation? I'm not really recommending it as a good tobacco, but as a fun smoke to try.