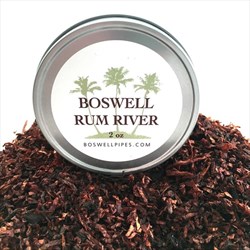 Creates a delightful taste sensation. A taste of the Island with every puff.

I want to start this off with something that I feel is very important. After 12 years, I've recently switched the way I smoke a pipe and the results have left me in bliss. I can finally enjoy those difficult Virginias and Aros. I'm getting a ton of flavor, cool smoke, volumes of smoke, and no tongue bite. The Aros that burned hot and were flavorless are now opposite. MacBaren is treating my mouth with respect. Oh my! Club blend tastes so good!

I started to pack my pipes loose and do something I've seen referred to as breath or breathe smoking. I leave the pipe in my mouth and pull on the lit tobacco when I breathe in, but with the same intensity as a breath. I breathe through my nose at the same time, without inhaling any of the smoke that enters my mouth.

I then exhale though my nose and partially-opened mouth, same intensity as normal breathing. When I do this, I make sure some of the smoke that escapes my mouth actually goes through the pipe. For whatever reason, this really cools the pipe down.

Tamp as needed and lightly. May have to tamp more since the pack is loose. I've read about this method for years and tried in the past but failed. You really need to take your time and get control over your airways. For me, It is a lot harder with a briar because I'm not a good clencher. I've actually shifted to mostly smoking small/medium cobs because I feel like clenching makes it easier.

I'm very surprised by this blend, having little to no information out there on the internet or on this site. I received a sample with my pipe order from Boswell's. I don't think I would have come across this tobacco any other way.

Even their site's description is short and uninformative. Seems forgotten or maybe a place holder that was never updated.

The bag note is very pleasant. Not sure what it smells like. I guess it is rum? But more like a rum cake or something like that. There's a toasted pastry smell that accompanies it. I'm not too good at picking out and recognizing alcohol flavors.

I actually had tossed this bag on top of the fridge when I got my pipe and forgot about it. I came in the kitchen later that night to my wife looking confused. She told me it smelled like cake in the kitchen and she was trying to figure out what it was. I agreed with her, it did smell like cake, and I helped search. Then I remembered the tobacco...

A little moist but nothing bad. I've stopped letting tobacco dry out unless it is SG wet. I've been packing this light and breath smoking it. Lots of smoke, tastes just like it smells (rum cake?) Sweet but not sugary. Toasted flavor that isn't bready, but more cakey. Maybe some vanilla. I swear there's hazelnut in there, but that isn't it.

I'm very glad this sample was included. Wish they put more effort in it's presence.

If you are ever in Chambersburg PA, a visit to Boswell’s large and busy pipe shop is worth the visit as is the museum on the second floor, especially if you are there to taste some of America’s best house made aromatics. Rum River may be a victim of the bar being set so high by their other blends. Rum River IMO isn’t up to par with many of the other Boswell aromatic blends. The rum flavor is so light that I had a difficult time detecting it. I get a lot more chocolate flavor in the pouch scent and in the pipe. It is still worth a try for aromatic lovers, but I would start with some of the other Boswell blends first.

From the bag, the tobacco has a nondescript aroma; neither pleasant nor unpleasant. I packed my pipe with great eagerness in anticipation of yet another great Boswell blend only to be dashed upon the rocks of disappointment. Rum River? What rum? My bag of Rum River had zero indication of rum, nor did it have any discernible flavoring/topping whatsoever. No vanilla, no chocolate...only tobacco. All of that being said, the tobacco taste is pleasant enough, for straight tobacco, but I bought it for the rum, which was entirely absent. Smoker’s Pride um Cured is a far better smoke than Boswell’s Rum River.

This is a blend that surprized me how much I liked it and keep going back for more. I really can't describe the flavor or aroma...it is so different than other aromatics I've tried. It's mild yet medium bodied and flavored. It's a little fruity, a little earthy, a little zesty. It has a unique character to it that I really can't put my finger on but it's a nice once in a while smoke. I like it later in the day. It's not sweeter like most Boswells, yet it has a lot going on. It's one to go easier on, it has a little bite to it and burns warmer.

I wish I can better describe this blend, but I can't. It's good, and I like it for a change of pace. It's a blend to just take it for what it is...it's outside the box of my usual sweeter or vanilla based aromatics.

This is a run of the mill aromatic blend. I detected no "rum" flavor or aroma. It burns decent after drying. Worth a smoke or two, but not missed after that.

Dang this smells amazing! Rich buttery rum aroma, with a slight vanilla undertone. The medium brown cavendish and black cavendish is uniformly cut, with no twigs or chunks to speak of. Boswell's take their QC seriously!

Moisture average for a Boswell blend, maybe just a bit more on the moist side. Packs well, but does take more than the average matches to get it started. This burns fairly well, offers up a good rum flavor and aroma, but its extremely mild. Great hot weather blend, and suitable for road trips. This is perfect for indoor smoking, as the room note is very enjoyable.

Due to the mildness and single dimensional profile, it's not my favorite Boswell blend, but still a solid tobacco base with quality flavoring

The bag note was very promising extremely aromatic great sweet rum smell. For me this was the beginning of the end again. I packed my pipe with high hopes, Smoking a small briar pipe no filter to get the full flavor . I found the tobacco very easy to light, and the tobacco that I received had a nice blend of what looked to be brown and black cavendish. I remembered why I stopped smoking aromatics after the first few puffs again. I found the tobacco flavor was so subdued due to the toppings that it was hard to tell if any tobacco was in the blend, and even with very gentle puffing using the breath method it was very chemical tasting. The flavors were very subtle as the chemical taste was the forward flavor. I was able to taste them but only barely just a hint of rum somewhere in there . As good as their honey roast and sweet tea is as an aromatic ( for aromatic smokers), I found this blend discouraging . I have found for me personally at least, Boswell blends are totally hit and miss. Magnum is one of my favorite blends all around they totally scored on that one. This blend not so much. Its not often I find a blend actually un-smokable but I need to dump the pipe at the 3/4 mark and throw in the towel. Mom always said if I don't have anything good to say don't say anything at all. I leave this review at that.

Age When Smoked: gift not sure but aged a bit

First, I am not an aromatic fan. I was sent a sample of Rum River with the purchase of a pipe from Boswell.

Curiosity compelled me to load a bowl, and I was surprised. I did not find Rum River objectionable. Too often flavorings are overwhelming, but beyond the pouch aroma being reminiscent of a bakery, that was not the case here. While I am unlikely to purchase this tobacco, I would be comfortable in recommending it to those who smoke aromatic blends. My ratings are based on my own preferences only.

Similar Blends: I have no comparison as I do not delve into aromatics..