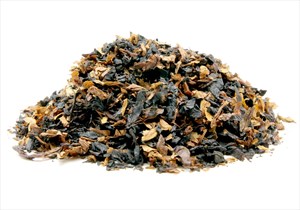 Basically a black and brown to gold mixture of Virginias, Burleys and Maryland. Also described as: A wonderful aromatic blend of Toasted Golden Cavendish and Burleys.

Notes: Have been told A20000 is a bulk mixture similar to Captain Black White. Sweet smell, not able to distinguish the casing. Most probably vanilla, but not overbearing.

I was unsure as to how this would taste; the description suggests it's quite a strong aromatic, yet the current reviews not so much. Lets see:

The coarse cut mix is free from any chunky, twiggy, or leaf-like pieces. The aroma from the pouch implies a casing: mainly vanilla, and the hydration's perfect.

A-20000-Toasted Cavendish lights easily, and the smoke imminently concurs that there IS a casing: again, the vanilla comes over the loudest but there's also some alcoholic piquancy. Now, this alcoholic note isn't at all imperious, but present nevertheless. I also notice a subtle caramel trait, or maybe a honey sort of sweetness. At first light this tastes like a steadfast aromatic, but after ten minutes the tobaccos' make their presence known: the Maryland and Virginia give a wonderfully sweet-fruitiness. The Burley tends to be more of a background player: it can be identified, but the other flavours push it back a fair bit. Something else that 'seals the deal' for me that this is an aromatic is the tongue bite; after half a bowl I need a break!

I can't say I like the room-note much, and the nicotine's very mild.

This is an ok blend, probably great for beginners, but it won't be added to my rotation.

Identified by the seller as "Cavendish", seems to me that is not pure Cavendish.

It an "naturally" sweet and aromatic (no artificial) Tobacco; Is quite different, since it is not fully aromatic as a pure Cavendish or typical english mixture,

Is intermediate, since it is not similar to a pure, non aromatic Burley-Virginia mixture.

I recommend it for people that want a natural tobacco, but with only a trace or aromatic taste.

One interesting manner to describe it is: "show a weak flavour of Cavendish" but is not pure Cavendish.

I first smoked this tobacco back in 1980-81. Its name should be listed as Dunhill Mixture A-20000. It was better then. At the time, and a novice pipe smoker of a few years, my tastes tended toward aromatics. A colleague of mine was smoking it and it really smelled terrific! I tried it on that experience. I don't remember ordering it more than once or twice from the Dunhill shop that was at the time still in Manhattan (1 lb bulk). What I do remember - and what is lacking in the present incarnation - was a distinct smell and taste of rum/chocolate.

The present version is no way the same stuff. First off, the original was more of a ribbon cut, the present is much coarser in cut (I also remember Capt. Black White as more of a ribbon cut 30 years ago as well). There is no distinct pouch aroma other than a mild sweetness and vanilla. I could detect the vanilla flavoring while smoking and it was sweet tasting, but I couldn't really taste any tobacco. The chemical taste was accentuated the longer I smoked it; albeit, not as pronounced as in Dunhill Mixture A-21000 that I previously reviewed on this site. There was the ever present moisture as with most aromatics of this sort, but not in abundance. It was not bitey in any way, however, it created a harshness in the back of my throat half-way through the smoke with a definitive pepper-like after taste throughout the smoke. It certainly has enough sweetness (but not cloying) for the newbies and I would recommend this for beginning pipe smokers. It is easy to work with as far as packing, lighting and smoking go. If it wasn't for the sweetness, I could see that a blend as bland as this might make a beginner say, "What's the point in smoking a pipe?"

I'll rate it 2 stars out of 4. It was by no means terrible, but it didn't make its presence known for me in a way to rate it higher. Definitely a "smoke it on a whim" tobacco for me. Perhaps I'm hooked on nostalgia, but I believe any similarity between the older and present version is in name only.

UPDATE 8-14-10: On a whim I tried this again as I wanted something light and was intrigued by Pipestud's review of the Tinderbox Chartwell (RLP-6), which is what Mixture 20000 is purported as being. Filling a pipe bowl from my nearly 1 pound bulk provided me, this time, with a chemical-free, non-goopy smoking experience. Yes, it is light on true tobacco taste, but slow puffing brought forth some very delicate vanilla-chocolate flavor as well as a deliciously sweet sidestream aroma. Still no presence of the rum as with my first experience many years ago, but pleasant enough to up it a star to recommended. My having "put it away and forget about it" seems to have been the key with this one. And yes, it is smoother and better than CB White once you let it sit for a long while.

UPDATE 7-25-13: Very similar in taste to Lane's new Dark, but Dark has a much sweeter profile.

Chicanery at it's finest. Folks, this is nothing more than Lane's RLP-6 with the Dunhill name stamped on it to promote it's sale. Here's a factoid. Dunhill is an English company that at one time produced English tobaccos. Now, don't get me wrong, I like RLP-6. What I don't like is retailers that stoop low enough to try to swindle an unsuspecting pipe smoking public into thinking they're buying something different than what it really is. Now, I'm sure that the bag was likely labeled with the Dunhill name before it gets to the retailer, but a decent retailer wouldn't participate in this ruse.

I would give this no stars if I could, and the retailer that sells it even less.

Hard to believe this has not been reviewed in 5 years.

I recently bought some to try as I'm finding myself enjoying aromatics again as a change from my regular diet of VA, Burley, etc...

The mix in the bag was mostly dark tobaccos with some smaller light flakes mixed in. The cut is what I'd think of of rough cut with varying sized pieces of the different components. The moisture level is a little damp

The bag smell is liquor-like and some vanilla. I didn't pick up on much tobacco smell. Once dried out a little, it packs easily and lights easily.

The taste at first was the toppings. However, as the bowl is smoked there is a good base of tobacco behind it. The flavor reminds me of Captain Black original and my wife said the room note is "classic" pipe tobacco and pleasant (A bonus)

It's a nice aromatic and with the quality of the tobacco, the easy smoking and good flavor, I'll keep some around to smoke.