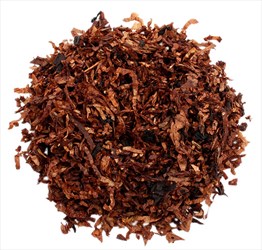 A blend of very mild aged burleys and toasted cavendish with the crisp taste of apple. An old favorite.

Pipesandcigars.com was running a sale. 20% off all Sutliff blends so I took advantage and purchased a whole bunch of 1 oz samples that I was interested in trying, this apple being one of them. I've been searching for a good apple aromatic for a long time now and I've come to the conclusion that one just doesn't exist. Didn't detect any Apple flavor at all, just a flat tasting Burley and this was smoked in an estate Parker that was completely refurbished so there was no ghosting of any other flavors. For a dollar change I'm not upset but definitely not something I'll keep on hand.

I was sent this blend as a sample. I would never have bought an "apple blend" but as I have it I thought I would see how it smoked. I expected a sickly sweet and tart tobacco. It was a shag cut with mottled colors running from light to dark, and was not as wet as a lot of Altadis blends, which was a good sign. It packed well into my pipe with no stickiness at all on my fingers. It lit and stayed lit all the way down to the bottom of my pipe, leaving no goop at the bottom and it never created a gurgle like a lot of aromatics do. I was awarded with a very nice mellow smoke, very burley which I like, and a very pleasant room aroma. Aroma and taste never did reveal apple however. Just a good, clean, pleasant smoke. I really do not know where to rate this. It is a good smoke and I will finish the pouch as I received a good pipe experience and enjoyed it. A lot of pluses here really in this type of blend. But, as I did not get apple at all, I can't rate it too high as it does not live up to it's name and therefore let many down if they want apple taste. So I am giving it a two star, but really it's a nice smoke and people ought to give it a try if they are burley smokers.

This was another 2005 Kansas City Pipe Show freebie. A very delicate blend in which the apple taste was so subtle that I missed it. I sure could taste the burley and was reminded of Prince Albert, although this one was more "heavy on the sweet stuff, whatever it was.

Bag note has a mild sweetened aroma. Not detecting any apple sort of smell.

Came pretty wet and this has sat in a plastic bag for a few months. I dried it out a tad bit in a toaster over, which did make it smell like apples.

The taste is, burley. An earthy, slightly woody burley. Not getting much of a nutty flavor or any apple flavors. What I do get is puffs of very sweet like sugar taste I assume from the cavendish and or the topping. I would describe it as sprinkling sugar over some Carter Hall. When I do get that sugar taste it’s rather nice, however mainly I get a one dimensional burley tobacco. Having smelled this in the toaster oven after leaving some more in for “too long” it did have a nice apple smell so people around you would probably like it.

If you want a sweet burley based tobacco that smells great around people this is for you, if not I would pass.

This is in no way a match for Middleton's Apple! Middleton's tasted and smelled like apple! It was fresh and clean and happy. This 208 crap is dust off your shoes. If anything 208 is just a vanilla Cavendish and nothing else. Apples not included.

First things first, it's not a shag (as currently described). It's actually coarse cut. Sadly it arrived virtually wet, it was properly sodden. The last apple aromatic I recollect having was Solani 127 Green, and that only got two stars, but I find this a little better. Better, after a LONG airing!

The apple is a notable flavouring in the smoke, albeit not as strong as in the Solani. It gives an identifiable character, without taking over. The Cavendish adds extra sweetness, and smoothes the taste. It tends to burn too warm, but I find little problem with the speed.

I don't find the flavour bad, but I can't deny there's one or two mechanical issues:

Moisture content was perfect when received. No tongue bite. I wouldn't call this an aromatic. I might have been able to detect the SLIGHTEST hint of apple when I exhaled thru my nose. I just tasted tobacco, reminding me of Carter Hall.

This doesn't taste like apple to me either. It tastes of cheap Burley, and I won't fool with this again. It is a fixture in a chain of tobacco shops where I live. If they don't start carrying better stuff, they will certainly go under...

Found this to be a decent smoke, not an apple bomb but a subtle apple flavor. Fine ribbon cut in my bag and had a near perfect moisture content. You can taste the burley and that’s good. The Cavendish adds a sweet note to the blend as well. This should be smoked at a moderately slow pace due to th sugar content of the Cavendish. All in all a satisfying smoke with not much nicotine punch. Consistent flavor throughout the process with no peaks or valleys. Will keep a supply on hand to smoke as I work.

This is a different aromatic... It have only a slighly flavorization of Apple. Seems non aromatic, but is...

Is an aromatic, but not looses the tobacco flavour and taste. Burley Taste.

From this, smoke slownly to scent the flavour.

Notes of Apple in the pouch and in the smoke. In smoke, also some Chocolate Notes

I reccomend it, both to people that enjoy or not aromatics.

The Brand, Altadis, is famous to produce good products.

Try as I might, I just couldn't connect with this one. The idea of apple sounded strangely interesting. Too bad I still don't know how that tastes - I never detected a trace of apple. What little taste there was, was just mild Burley.

About like Price Albert or Grainger, but only about 25% of the flavor.

I couldn't detect any apple flavor in the pouch aroma, the room aroma, or the taste. This tobacco is just sweet in the aforementioned categories.

The tobacco burns fairly well without gooping up the pipe. This is a tobacco with a nice room note, but it's just too plain and unimpressive for my tastes.

So this is what a cheap aromatic tastes like when they forget to add the casing? Seriously, this is more of a burley blend with a tiny drop of apple flavor. And It doesn't do that right either, unfortunately. It's fairly low quality burley, with the slightest bit of Cavendish in there for a richer smoke. The apple is barely there.

More of a red delicious - I was looking for a Jonathan. Unlike other reviewers, I did pick up on the apple although it could have been patterned after a more tart, sweet apple. I detected no cinnamon, which was promised. That being said, it is a decent smoke, unobjectionable taste. The room note passed the wife test and it was an overall pleasant smoke, just not the one I was looking for.

Let’s face it, as humans our common reaction to an experienced pleasure is not mere satisfaction, rather it is an insatiable craving for more slices from the very pie that delighted us in the first place. For some reason I’ve been Jones-ing for some old sweet aromatic favorites from yesteryear. Not sure why because I’m really an English and Burley patron truth be known. However, I was a LONG running smoker of Middleton’s Apple blend. Unfortunately, you can’t get it nowadays. So, I bought a sample ounce of Sutliff’s Apple from P&C just to see if it had game. The reviews were mixed frankly, good on P&C, not so good on TR.

This coarse cut mixture of assorted Burley and Cavendish splashed with apple flavoring offers a light-hearted run. The nose fragrance is vague sugary note of typical Cavendish that seems reminiscent of an apple but nothing too substantial. Underneath this muted scent is the woody cigarette-like smell of Burley. Nonetheless, it is very attractive looking specimen consisting of warm hues of rich brown-black tobaccos; very dense in mass.

The additives ride herd on the overall taste; gentle and moderate in tone. Essentially one gets the subtle taste of tart-sweet apple equivalent to a Jonathon varietal if I were to speculate. There is a consistent brown sugar accent and just a fleeting hint of cinnamon as well. The base note presents itself as caramel-nutty Cavendish. A distinguishable taste of Burley is nowhere to be found in the registration.

The room note is personified is light tart smell of baked apples (small ones at that). Slow sip this mix as tongue bite will definitely spoil your day.

Mild in taste/strength and medium body is the conclusion. Sutllff’s is nowhere close to my old favorite. As the benchmark standard, Middleton’s essence of apple was glorious by comparison. If you know a better apple blends, then please share the love. If not, Middleton appears to be a ghost from the past at this point, rats! For all the aromatic fans, this mellow smoke might tickle your fancy for a fruity delight all the same