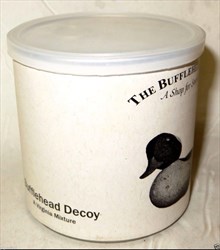 A Virginia mixture. A Virginia cake created for the smoker who enjoys the taste and distinctive flavor of Louisiana perique. Aged and matured with the finest of choice Virginia.

A 2001-marked tin that came into my possession quite unexpectedly. This is clearly a McClellands product, based on the tin aroma (and the taste). Compared to 2015, this one is darker with a deeper, richer aroma and the broken flakes are a LOT easier to work with. Nowhere near as hard and crunchy as the 2015.

In the pipe, this was one heady and heavy perique blend! There are those who claim that perique, like latakia, tones down with age. I don't agree, and this would be one of my exhibits. The perique gave off a huge amount of pepper and spice and just a little bit of fruit. The Virginias were nice and sweet but not syrupy. Compared back to back with 2015, I found this one darker and richer but not as sweet, and the perique component in this one more to the forefront. Overall flavor was rich and meaty, with a pleasant tanginess and a good amount of spice. Complexity was moderate, but I didn't mind. The flavor was attention grabbing. This approached the flavor of a good aged St James Woods, which is one of the finest VaPers I've ever smoked. I have to give this four stars. It's made by McClellands but it's different from their badged offerings, just as the Butera blends are. Distinctly McClellands with a twist! If you're a VaPer fan and can find this (mine was cheap!), buy it!

A fine VaPer that was probably a crowd pleaser for those who like Virginia/Perique mixtures for all day smoking. The taste of both was always apparent with each puff, but the lightness of the blend, for me, kept me in a state of "lacking something," with every puff. Still, a very nice VaPer with quality leaf and surely was a go to for many.

Too bad this company's not around anymore. I don't know the details, but I miss them. My tin is about 3 years old, and is my one and only tin of this blend.

This is obviously a McClelland product. You can tell by the wonderful tin aroma. It's similar to 2015, but the Virginias are darker and it has a little more perique. It smokes smooth and tasty with wonderful high notes. I would say this is most similar to Escudo. The 3 years sealed in the tin have surely helped this tobacco. If I would have known how good this was and that Bufflehead tobaccos were going to disappear, I would have bought about 50 tins. Oh well. I'll savor my last couple of bowls. I still have 2 tins of Canvasback Decoy in my cellar. I hope Canvasback Decoy is as good as Bufflehead Decoy.

Having only smoked several bowls of this blend I risk not gaining a full assessment of it, but am so impressed thus far I felt I must get my thoughts down right away.

I bought this current tin from Bufflehead back in June so it has aged in the tin for seven months. I am not sure how that may have affected its flavor.

Opening the sealed tin I notice a very nice medium dark, broken flake. The usual burning of the nostrils Perique is there, stronger than in other VA/Periques I have tried with the exception of Escudo. Fragrance of the Perique is very similar to Escudo, which seems to be the benchmark of the VA/Perique set. I find that aside from the burning sensation, the fragrance of Perique can vary from blend to blend but in both Escudo and Bufflehead Decoy, it has a very pleasant, fruity fragrance. A tobacco shop employeee once told me that Perique was cured with plums, and the fragrance in Escudo and Decoy remind me of that, but aside from this one comment I have never seen any other mention of Perique being cured with plums. I also was under the impression that Perique only came from one or two farms in Saint James Parish, Louisiana but have recently learned that it has been "copied" in other areas from Kentucky Burley, although with nowhere near the quality of the St. James product. The quality of the Perique in Bufflehead decoy seems quite high, so I am hoping what I am getting is the St. James Version.

Famous as Escudo is, and with no argument as to its high quality, I have never been able to warm to it, but in smoking Bufflehead Decoy, I have had a very pleasant experience.

The tobacco in the tin seemed a little dry. I put the tobacco in a glass jar with a chalk disc humidifier in the cover. Soaked the humidifier with water and in 24 hours the moisture content seemed just right. Lighting is a breeze and what follows is a smooth, mellow smoke with the Perique coming on very noticeably, but not overpowering. The Virginias complement and mellow the harshness of the Perique and also provide a smooth touch. The taste remains pretty much even throughout the bowl. Relighing has not been necessary. This could possibly be an all day smoke. One other embarrassing characteristic of strong Perique blends for me has been that they tend to give me the hiccups toward the bottom of the bowl. A rather frustrating experience and I usually keep a glass of water handy while smoking. I found that this has not happened with Bufflehead Decoy despite its seemingly high Perique content. Another plus with me.

Overall, a very pleasant smoke. Recommended for those who may have been turned off by other high Perique content blends and who might want a Perique blend for an all day smoke. Another home run for Dave Windsor and the Bufflehead shop!

In checking the Tobacco Review database, I noticed that Bufflehead Decoy had not yet been reviewed. For several reasons, I decided to be the first and purchased an half pound.

First, it bears the name of the company, so I thought they would put there best foot foward with their namesake. The description says it is a Virginia for the smoker who enjoys the taste of Perique and I do. And finally, I have had good fortune with Bufflehead blends previously.

As an aside, our database shows that there are a number of Bufflehead blends that have not yet been reviewed. In my experience, they use high quality tobaccos and produce very good blends. And their customer service towards me has been excellent and even personalized. Give one of their unreviewed blends a try.

The eight ounces came in a sealed can, like a large soup can. And I needed a can opener to open it. This would be great for someone who wants to put some of this up for long term storage.

In appearance, Bufflehead Decoy is a broken flake, darker in color than McClelland 2015. The scent of the tobacco in the can reminds me of a dark, semi-sweet chocolate, with a musty, earthy component. There is Perique there.

I tasted a piece of Bufflehead Decoy on my tongue and compared it to the taste of McClelland 2015 on my tongue. 2015 is definitely sweeter to the taste than the former, which is has a flatter, dry, slightly bitter taste. That may be of interest to those who intended to use one or the other for chew, but there you have it.

It rubs out well, packs nicely. To the touch, the moisture level is just about right. But towards the end of the bowl, I began to detect some condensation in the heel and stem of the pipe.

It is apparent from the first light that this blend has Perique. It tickled my tongue and caused my nose to tingle. The bowl required one relight. It draws easily and burns nicely. The taste is that of a full, rich, quality dark Virginia with Perique. The smell of the smoke is also darker, richer, fuller, that 2015, without the cedar campfire scent that I like with 2015. I do, however, enjoy the rich, dense tobacco smell and taste of Bufflehead decoy.

Summation: If you like quality Virginia flakes and REALLY like a Virginia flake with a strong Perique component you will like this blend. If you don't, you won't. I am really enjoying this tobacco and intent to continue smoking it.

I am something of a one trick poney when it comes to tobacco. Aside from MacBaren's London Burley Blend, I have found nothing that captivates me like a good VA/Perique. This is a good one.

Va/Perique blends are something of a "sidestep" for me but when I went looking for one to keep in mind for a change-of-pace smoke, Bufflehead Decoy became the winner, at least by a nose. Ya really have to like Perique though. BD requires only minimal rubbing out, smoke volume and burn properties are good and the taste is even better, especially as one progresses through the bowl. The blending of the tastes seems to have been done very skillfully and that's a major plus (for me). I count BD as much preferable to the well-known McC.'s #2015 V&P, and better behaved too. It was most enjoyable in a largish meerschaum and does need to be smoked relatively slowly for the tastes to come forward while leaving the bite and gurgle behind. Taste and smoothness counts a lot with me so, though not a V&P cheerleader, I still want to give Bufflehead Decoy three solid stars.