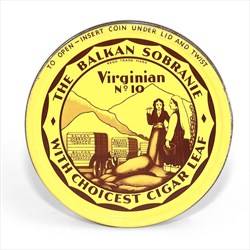 Tobaccos Sobranie of London - Virginian No.10

One of the finest blends ever to hit the market, IMO. The deeply rich and ripe Virginia leaf is complimented but not overwhelmed by the exceptional oily and rip cigar leaf to produce an otherworldly smoke. As unique a blend as I have ever had the pleasure of putting into one of my pipes.

I am welcomed by a strong,musty smell from this 20+ year old tin. Transferred to a jar, it's now a definite cigar smell with some highly fermented Virginia undertones. There is a small crystal deposit on the thick ribbon cut that has dark brown to dark strands.

The tobacco moisture is perfect for smoking right away. There is a deep, earthy cigar main note with a mellow and creamy Virginia flavor, that is there most of the time in the background. A bitter interlude comes and goes but it doesn't bother me. A smooth and cool smoking experience.

As far as a Virginia and cigar mixture, it deserves maximum points, of course I prefer to smoke this after a hearty meal, or on occasion where something stout is required, without the gut punching effect of strong nicotine.

Found an old tin of this in a suitcase! Not stored in the best of conditions (attic) but that didn't seem to matter. I'm guessing this tin is from the mid-1990's.

I'm not sure why I had it, as I was never a big fan. However, time has been exceedingly kind to this blend. The cigar note that I previously thought overbearing is now extremely mellow, but still noticeable. The virginias definitely took over, although today they are less sugary sweet and more of a burnt sugar. Darker than I remember it when fresh. The taste of this is dark as well - kind of a stoved flavor but heavier. Very tasty stuff! The cigar flavor comes out with each puff but is very subdued. I suppose the blend would be fine without it but it does add some distinction and plays well with the condimental leaf (which I can't quite discern). I would have to say that this one ages beautifully and if you can find a tin that doesn't break the bank, it's well worth a try.

Arriving in the pipe world after the demise of Sobranie of London, it would hard to believe that anything produced by this famed blending house could be sub-par as it is held is such reverence by so many pipe smokers. I have haven’t found a bad one yet, but maybe that has all changed with Virginia #10. Sobranie’s Virginia #10, is a different kind of cat being a Virginia flake with quite a bit of cigar leaf. My tin was from 1985 (if the hand date stamp is accurate). The flakes are now covered with sugar crystals. I have smoked about three fourths of the tin and alternated by rubbing it out and stuffing broken flakes into the bowl. I prefer the flakes broken rather than rubbed The Virginias hold their own here, matching the cigar leaf with a nice bit of sweetness. Virginia #10 isn’t very complex and became a bit boring after several bowls. I have to believe that at the time the blend was tinned, the cigar leaf likely dominated the smoke. So, based on that theory, I wouldn’t have enjoyed this blend even though I enjoy cigars. Based on what it is today, it would be a weak three stars for me, but as it was intended….not so much.

I got some sealed packages of this old venerable blend. A old virginia from the 90's with a nice punch of high quality cigar (cuban?) leaf and a little condimental leaf added.

This is ribbon cut. It tastes like a sweet virginia underneath but reved up with cigar leaf. Cool. Dry. Not as heavy or dark as Dominican Glory Maduro but more elegant. Still should be puffed deliberately.

I can't say light due to body of the cigar leaf, which is more than a note in the taste. But the virginia is very smooth and more than supports the cigar ingredient.

If you want heavy, go for Dominican Glory Maduro. This #10 has real cigar flavor floating up from refined virginias. Yes, more refined even than Bankers, another top quality va/cigar leaf blend. Of course, age helps.

I puffed slowly on my back pourch in the mornings on my 25 gm pouch from Christmas to near February '06, just consuming a bowl every day or two in an old Dunhill Crosby dedicated to cigar blends. I thought what must the old timers had thought when they could smoke something this good whenever they wished. I was alone with singular quality such as I have seldom experienced before, realizing, really realizing that we have lost an era.

And I could have bought this easily in the 70's, 80's, etc., had I known what it was. But there was no Serads, Gages, pipe professors, tobaccoreviews, or P&T magazines back then. There were some mags and a good tobbaconist here and there, but there was too much stacked around to know what to ask. #10 after all must have been a special treat. Sigh.

I recommend this as not everyone, nor I, wants cigar leaf in their pipe all of the time. But if you can get a pouch or tin for a not too ungodly price, go for it.

The tin I tried was supposed to be from the early 80's. It tasted like a cigar shop smells, which is to say not very strong but very earthy. I enjoyed the several bowlsful I had, but would not buy this if it were brought back into production, as it was too bland and generic cigar tasting, Key Largo is much more nuanced and has a pronounced Maduro flavor that I enjoy more.

Ahhh, the number 10. the tins i have smoked have been old and expensive but oh so worth it! a sweet almost brown virginia taste with the cigar leaf always there with a touch of Sobranies latakia and super high quality orientals. i love this stuff because after all these years the virginias sing to me in the pipe with all the condimental leaf whispering behind the cigar leaf. tastes are all subjective but to me there is nothing like this being produced today. I think it is closer to hearth & homes Virginia Spice than robusto or Bankers. Such balance, such finesse. I like to sip this in high grade horn shaped pipes. I dont understand why current manufacturers make a cigar blend and load them with latakia and weak orientals, but put in virginias that cant be tasted. maybe someday somebody will come out with a cigar blend that replicates this taste, but i doubt it. one can hope.

Notes: Long gone. My tins have been from the 1970's. It seems to smoke best in a smallish billiard.

Taste: The familiar round sweetness that pervades every mixture by the house of Sobranie rears its head immediately upon lighting, but this sweetness fades rapidly to an echo and remains subdued for the remainder of the smoke. The flavor of Upmann cigar leaf dominates, figs, Virginia tobacco, dry paper, walnut oil. Brooding strength. Smoldering bitterness.

Comparisons: By far the most well-integrated of the cigar leaf blends, inasmuch as it is difficult to pick it apart into its components. It is also rather smokier than the rest, at the expense of the Virginia flavor, somewhat.

Bottom Line: For cigar leaf blend fanciers who seek a dominant presence of smoky flavor and cigar leaf, this is one to try.

Quite smooth, but also imho rather unexciting. I am smoking a 15 years-old tin, and I find it comparable to Dunhill's Cuba but slightly more cigarish and spicy but just as creamy). The Virginias (now rather dark due to aging) are not very sweet. Overall it burns well and is finely balanced, but I feel that a Virginia lover will miss some sweetness, while a cigar lover will certainly prefer GLP Robusto. Me, I'd rather pick the sweet Banker's from Fox. Not bad, but for me unmemorable, although I admit it grows on you in time, and the second half of the bowl can be very pleasant indeed if still lacking in some substance: yet many people mourn its disappearance.