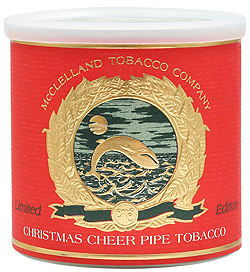 Notes: Produced in 1992, 1994-present in limited quantities. Tinned in July of the respective year.

I picked up a few older CC's in an estate sale and wasn't going to smoke them for awhile but this tin was bulging to a disconcerting level so thought I'd crack it now. The tobacco was a deep gingerbread color with some lighter strands and the signature McClellands aroma was present in spades. As I've said before, it always tickles me when people complain about this and then don't dry out the tobacco to make it disappear. That's like complaining that they'd enjoy steak more if it wasn't so undercooked!

I smoked a bowl of this at tin moisture ( it was still quite moist) and got the expected steamy "meh" taste. This was best very close to crispy where it allowed the orange and red crisp flavors to shine. There was a very light citrusy flavor that was like an exclamation point to the deep tang offered by the orange-red crop. This is straight Virginia at its finest. I never got to smoke this version fresh so I don't know what 20 years has done to it, but I imagine it has aged magnificently. There were some darker fruit notes but mainly a wonderful bready quality with perhaps some more exotic flavors such as ginger, nutmeg and a light clove. This needed to be smoked slowly and, as always, benefitted from some snorking to bring out the full montage of flavors. Heavier puffing brought the fire and tongue sizzle, as well as a breakdown of the flavor. I stupidly smoked this entire tin and I don't expect to find another at a price I can afford, so it's literally up in smoke... and I enjoyed every puff! This rivals the 2005 crop for the best CC yet! But I still have a few more to sample.

A bowl of this starts out mellow, woody and leathery, giving way in fairly short order to a soft sweetness. The dominant impression becomes one of a spicy butter cookie flavored with anise or black licorice, with the occasional taste of a lemony frosting. The smoke is satisfying, with a good body, and it tickles the nose. The individual flavors vary in degree as they come and go, as if the tobacco is trying to express every possible combination of flavors as it is consumed.

I should note that the contents of this tin of 1997 Christmas Cheer (stamped 071897) had been abused since the seal was broken almost ten years ago. The storage conditions were about as far from ideal as one can reasonably consider and the tin had rusted completely through in three spots. Yet after careful rehydration, this was still wonderful tobacco when smoked in October and November of 2008.

Having been less than thrilled with the 2002 rendition of this blend, I was compelled to dust off a tin of the 1997 version. It's been almost two years since I last tasted this, and I'm glad I have eight more on reserve. This weed brings a smile to my face. I'd call it a guilty pleasure, but I reserve that term for blends that lack the character and objective quality of this stuff. I hesitate to call it a blend, as it's made from a single crop, and what a crop it was.

This was one of my favorite Xmas Cheers when I first sampled it, and the years have been very kind to it. It now has a succulent quality to it, and a bouquet reminiscent of a great German Auslese, replete with notes of citrus and Asian spice, and is akin to smoking candy.

Now if I could only convince the missus and the chillun to get me tins of tobacco for Father's Day, birthdays, anniversaries......

The red and orange Virginias provide a lot of tangy dark fruit, plenty of wood, earth bread, some tart and tangy citrus, grass, sugar, light floralness, and a pinch of spice. The “vinegar” is stronger in this particular batch than it does in some other years. The strength, nic-hit and taste levels are medium. There’s no chance of bite or harshness, and has few rough edges. Burns cool, clean and slow with a very consistent sweet and slightly savory flavor that translates the pleasantly lingering after taste, and room note. Leaves little dampness in the bowl, and requires some relights. Not really an all day smoke, but the veteran may find it to be one. Doesn’t have the depth of the best years, and has a savory note not often present in other batches.

This was the first McC CC I purchased back in 1998. Boy I'm glad I added another 15 tins to the cellar!!

There are not many tobaccos I appreciate more that a good Orange Virginia, and this one is at the top of the heap.

Every year or so I pop a new tin, and am amazed each and every time with the progression of the fermentation going on in those tins.

If you are a VA fan, and love the orange citrus taste, fine and buy as many as you can!!

This is the first of my CC tins opened...and I must say on first impressions it's a disappointment. That said I think the tin needs to sit in the jar for a few more months. I was expecting something like FVF, or Long Golden F. but it's not so sweet, has a nice mustiness, slightly clovey, But really somewhat bland. Given all the hype about cellering this stuff...given the fact that I know and love my VA's....I can see me editing it up to 3 stars in 6 months but that's it. Don't believe the hype!

Bought this tin off ebay after trying a tin of 2002 and this batch is even better! The flakes were covered in crystals and nice and dry, ready to go. The BB-Q ketchup aroma was actually overwhelming,( i can see everyone shudder) i thought the 2002 would be more pungent but boy was i wrong. Left to air for a couple of days and it smelled like a normal McClelland blend.

Even sweeter and more chock full of smoke than the 2002 i attribute this to the age. The tin is dated 7/20/1997 and today is 8/3/2004. I have finally seen the difference age makes on a red or orange virginia, bite is eliminated and those crystals are so cool! I dont know why but i find i like the orange virginia taste better than say, Red-Flake from McCranies. (may be sacriligous) but i find it sweeter. Mixed half with Nut Brown Burley, its what half and half should have tasted like if good leaf was used.