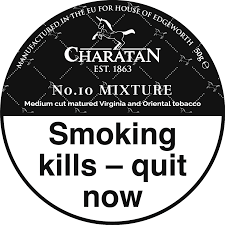 Notes: Frederick Charatan established his business in 1863 in London and it remained in the hands of the Charatan family until the 1960ies. Later it became owned by Dunhill (part of BAT British-American Tobacco). With the withdrawal of Dunhill from the tobacco market in 2017, Dunhill sold its brand Charatan to “Tor Imports Ltd.” (based in the UK) in order to save the old tradition brand of Charatan. Today Charatan produces pipe tobacco blends that are inspired by the former Dunhill pipe tobaccos.

One of the better Charatan attempts to make a substitute for the missing Dunhill blends, this one isn't the same as London Mixture, but it does help scratch the same itch for a fairly strong, spicy oriental leading English mixture. In continuing my sampling of these blends, I've been smoking the two alongside, to compare properly.

Appearance: mix of amber, brown and a little black ribbon very similar to London Mixture, although the cut of these Charatan blends isn't as neat or even, with a few big leafy pieces. The moisture content is about average, not unduly wet or dry.

Tin aroma - oriental funk, yeast, spice, leaf mould. Hint of incense, and subtle smokiness from the latakia. There is an overlying iced bun sweetness similar to that I noticed in the the Charatan Royal Ensign /Standard Mixture substitute, although it isn't as prominent here. I'm thinking it's to do with the Virginias Charatan are using.

It lights easily, and the flavour is pleasant, with bready flavours intermingled with spice and an astringent nutty character. There is a sweetness here that London Mixture doesn't have, but it's not excessive. There is some flavour progression as you smoke it, with a gathering richness and spice. It gets stronger as you make your way through the bowl.

I think the nicotine content is at least the same as in the London Mixture. The room aroma seems to be what you'd expect from an English mixture, nothing excessive and it doesn't hang around. It doesn't need much attention or relights, and you can burn every last shred.

In summary, a nice smoke, playing a similar tune to its inspiration, although a little sweeter. I love my English mixtures to have plenty of orientals, so it suits me, and it's fairly economical. Just a shame about the name really. I think the chances of a pipe smoker entering No. 10 Downing Street these days are about the same as those of our ever having an honest Prime Minister...

It is said that “Charatan No. 10 Mixture” is inspired by the former “Dunhill London Mixture”, which had been my favourite smoke during many years. Therefore I have high expectations.

First draws, first impressions: Optimal moisture, good burn. A striking sweetness and flavour of Black Cavendish. Am I smoking an Aromatic? Trepidation. Quite weak. I am impatiently waiting for the development of an “English” taste.

In succinct, I am very disappointed. Even in my king size pipes I have to wait to the last third in order to identify this mixture as a somewhat English blend, rather than a light Aromatic. The Virginias are weak and not of first choice. Latakia is there, in the background, donating a smoky whiff. Oriental/Turkish is only noticeable in the second half of the bowl. The whole smoke is accompanied by an undesirable added artificial sweetness and casing or topping. Now and then I get some acrid side-notes from these additives. None of the tobaccos contained deploys a satisfying aroma of its type.

I really wanted to like this mixture, since I am looking for a successor of my beloved “Dunhill London Mixture”. This blend has nothing in common with “London Mixture”. In my opinion it does not even deserve its own merit, it’s a fail. The abundant casing or topping is out of place in a supposedly classical English mixture. I tried hard and eventually gave up after having smoked half of the tin.