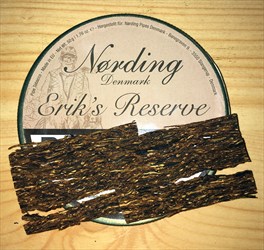 Here's one of those blends where after a few puffs I ordered more to cellar! It makes a cracking smoke for times when I want something relaxing but I'm not in the mood for a full-on aromatic. It's sweet enough to be on the precipice of aromatic territory but isn't in that genre.

The tin contains two stacks of rectangular flakes which appear to be a little mottled with lighter/darker flecks. I find the aroma to be one of a typical Danish style blend; not piquant, just slightly sweet. The moisture enables easy crumbling and filling.

The smoke? As I said, insouciant and calm! From the Virginia there's hay and dough, but no sharp Virginia flavours; this sets the precedent for a 'laid back' smoke. The black Cavendish heightens the sweetness but doesn't give the smoke a heavy, gloopy character. The Cav' takes second place, the Va's running the show. I find no problem with the burn, it's independent and reliable. It creates a medium temperature smoke that's quite thick in structure.

Opening the tin, the scent is fruity, wine-ish, with some hay lingering in the background. The leaf is dotted with a few flecks of Black Cavendish, otherwise this is pure VA, with maybe a hint of a citrus sauce. The slices rub out easily. Lighting takes a single match for me.

The flavour is sweet, with a touch of dark bread in the background. The sidestream also has a bit of spiciness. Little maintenance is needed, and I end up with practically no dottle. There is a lingering, comfortable sweet aftertaste.

Where I am, this blend is somewhat pricey, but I find it well worth the money.

I was surprised by this tobacco, since until now I had not smoked any mixture with this composition. Of the common ingredients that usually make up pipe mixes, Cavendish is the only one that I haven't tried in isolation yet. However, as most pipe smokers know, some tobacco blends are featured with a medallion cut, and sometimes have a Black Cavendish central core. Well, also sometimes, I load two of those medallions in the pipe, leaving two of those cores whole, without rubbing them. Thanks to that I have been able to distinguish the Cavendish ingredient in this mix and in my opinion it is constantly present in every puff. This makes Erik’s Reserve a smooth tobacco that smokes easily, without paying too much attention and without producing bites. Slow burning. A pipe of this tobacco promises a long smoke. As for the Virginia component, I have not been able to distinguish its nuances. I would tell you not to expect a typical Virginia lightly seasoned with Cavendish. For me, this is something else ...

At first it seemed interesting to me because of its originality in the composition and therefore in the taste, but now I smoke it only occasionally, in some moments where I am going to carry out some other task and I am not going to pay too much attention to the pipe. Among its weak points I would say that it is quite monotone, so I would recommend loading it in a small capacity pipe because if it cannot get tired.

In any case, I would recommend trying it because it will be the only way to know if it is a tobacco for you. In my case, I am glad I tried it and although I am not going to rush to open another tin, I will like to do it in a few years to see how it ages.