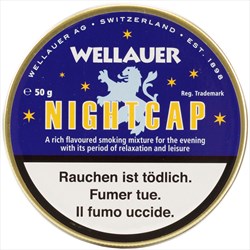 Spicy Latakia and small-leaved Oriental with a distinctive scent. To top it off, a precious Perique is added for a distinctive, unique bouquet.

if i would have to bet i'd say this is a carbon copy of Dunnhill's Nightcap.

there is nothing more to say here, if you enjoyed dunnhills nightcap and are looking for an alternative you will also love this one!

Being curious to find how closely the Wellauer NC matches the last version of the Dunhill original, I've smoked a tin of each one alternatively for several days. What can I say? Wellauer NC has a slightly larger ribbon and it seems to me even a little bolder taste, but that's all with the differences and, regarding the taste, it might be my personal suggestion. So I don't know if really the men at Wellauer have some residual Dunhill tobacco from the days in which they were tinning it or maybe they have been very clever in the imitation of the original, but anyway the Wellauer NightCap is very very close to the Dunhill NC. And so I have to rate it at four stars, as I would have done with the original.

This an attempt at copying Dunhill's legendary Nightcap, my personal favourite out of classics... and I must say it is avery sound attempt. I did not compare the blends side by side. However, as far as I can recall, it comes close. Maybe a bit sweeter and less earthy than the original.

Purchased From: Wellauer AG in Zürich

Before I move on with the review, I do want to mention that I haven't smoked the actual Nightcap yet, so I will not compare the two. However, I sought this blend as a possible replacement for Artisan's Blend, one of my all time favorites, though not imported in the country where I live.

Immediately after cracking the tin open, even before moving it closer to your nose, you are instantly struck by the Latakia. However, I can also sense a floral, musty, spicy smell from the Orientals and a hint of dried fruits/plums from the Perique. The tobaccos seems to be well distributed; it's not as dark looking as Artisan's.

The ribbons are not as finely cut as one might expect and there are some flake pieces mixed with the occasional twig. Despite this, it's very easy to work with and leads to a nice smoke mechanically, with no headaches.

After lighting it up, you know what to expect if you are familiar with its classic namesake or Artisan's Blend. The Latakia is the star of the show, with its campfire-y, leathery, woodsy taste. However, it's by no means a Latakia bomb and it's paired masterfully with the spicy, floral, slightly sour Orientals. They go very well together, like movies and popcorn. The Perique works in the background to lend a sip of fruits and raisins, while the Virginia acts more like the skeleton for this blend.

All these combine to form a very smooth, silky and deeply relaxing smoke, perfect for a peaceful evening after a long day. The nic hit is not strong, but the taste is full, robust, consistent and very complex. As for the room note, I enjoy it a lot and find it very pleasant, though it's definitely not something that you might smoke in public; I will thus settle on Tolerable.

Whether it's a copy or actual Nightcap sold under a different brand, this one is worthy of its namesake and it doesn't feel fake in any way. I sought a possible replacement and I can honestly say that I've found it in this blend. I'm very thankful that we have such alternatives.

Alright, so I’ve got my hands on this along with a 2017 European Nightcap and a 2017 American Nightcap, and I’ll try to make a review of this blend but also try to see if there’s any similarity with Dunhill’s Nightcap. For my review of Dunhill’s Nightcap go here: https://www.tobaccoreviews.com/blend/459#review105400

First things first, the tobacco in the tin still quite moist. I can’t smoke it from the tin, so I take out for one bowl and put it aside to dry for 5-8 minutes. The ribbon cut is well done and very similar to the Dunhill cut, maybe a bit smaller, at least in my tin. It’s full of black and brownish ribbons, but compared to the Dunhill this one probably has more virginia in it. It smells very nice, smoky and leathery, but it’s not as strong as the tin smell of Dunhill’s Nightcap. It’s closer to the european Dunhill than the american Dunhill so far. But, as it presents itself so far, the looks, the cut, the smell... I like them!

Now lets get to the serious part: Light up & Smoke!

I did just like I’ve done with the two tins of Dunhill (American & European), I’ve put myself some Wellauer Nightcap in a Savinelli Tevere 315 KS (Prince shape) and the Dunhill (European) in a Jean Claude unknown model (Prince shape), and I smoked them at the same time, but I also smoked them at different times (last night I smoked a bowl of Dunhill’s Nightcap and a bit later decided to smoke a bowl of Wellauer’s Nightcap).

Here are my conclusions, as far as I can get.

First of all, it lights up very easily, usually with two matches but now I managed to light it up with a single match (and another one later).

The first thing you’ll notice, and will be hit by, is a very smoky latakia. Second, there’s the leathery oriental/turkish. And third, there’s virginia! Yes, virginia can easily be detected, gives a sweeter tone and a little hay taste. There’s a slight peppery taste, but not as strong as in the American Dunhill Nightcap, but rather similar to the European Dunhill Nightcap. I think that if it had just a bit more perique, it would be an exact match. So far, it’s a very smoky and leathery smoke with a little sweetness in the background. And just like Dunhill’s Nightcap, this is full bodied!

I’ve light up the other pipe with the European Dunhill Nightcap and it seems that the Dunhill is more leathery, not as smoky as this Wellauer, but they are close. The perique is just as subtle as in Wellauer, you can feel it but not very strong as you would in an american tin. A slight difference is that Wellauer is a bit sweeter and smokier.

If you don’t smoke Wellauer and Dunhill side by side at the same time you can’t really tell much of a difference, only if you really search for it.

I can’t really rate the room note myself, because I’m already used to the smell since I’m smoking it, plus I’ve smoked from both tins at the same time. I usually have to go away from the room and come back in order to smell it.

Last night, after I finished the bowl of Wellauer I did the same thing. Got out of the room and came back about 3 minutes later. And what do you know? It smells exactly like Dunhill’s Nightcap! Strong smoky-incense smell, or campfire smell. And I mean strong! You don’t want to smoke this next to a non smoker. Or maybe you want, but he surely doesn’t. I personally love the smell, but most people hate strong latakia smell so be careful not to bother people around you. Be a gentleman. Respect your neighbors.

In conclusion: This is a very good English blend full of latakia, well balanced with oriental and virginia. If only it had a bit more perique. I’d say it’s a very close match to Dunhill’s Nightcap, but more like the European Nightcap, only that the Dunhill is a bit more harsh. Wellauer is smokier but Dunhill is harsher. It is 90% close to Dunhill’s Nightcap, so if you’re still looking for the Nightcap taste and can’t find the Dunhill, don’t hesitate to buy Wellauer’s match. This is really, really good and very close to the original!

Purchased From: Tobacco shop in Prague