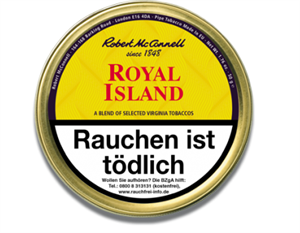 I smoked the old Dunhill Royal Yacht for over 20 years , from 1963 to 1983 when Dunhill production ended . Later on I smoked all of it's incarnations ending with the awful Orlick . The best was the older Mc Connell effort when Mc C was still Mc C . I believe , therefore , that Mc Connell had the original formula for Royal Yacht , they made it right after Dunhill went out in 1983 . The current effort is by K & K who took over the Mc Connell name . The tin note on this tobacco was so overwhelming that both I an a friend would not smoke it . I mean this smelled like strong brew . Clearly a strong topping . Later , after my friend left , I filled a small pipe with this sort of moist and stringy tobacco and humbly lept onto the breach , meaning I lit it . To my amazement this actually tasted like the Royal Yacht of old . Sort of the same " pequant" flavor , the strong nic hit , back from the dead after 30 years . Now original R.Y. was " pure shade grown Virginia" from the state of that name . This Virginia is surely from Africa , Asia or S. America and clearly is not shade grown . The fact is that they some how found the exact fit topping through some alchemy . Perhaps voodoo in the African tobacco . And yes , the old RY had a topping. I had not tasted that since Murry's went out and not really even then . If you liked Alfred's brew of old you will like this but it does lack the class and finish of those thrilling days of yester year . Never the less , the boat sails again . Good show K & K

The Virginias provide a lot of tart and tangy citrus, grass, hay, earth, some tangy dark fruit and wood, and light, dry floral and spice notes. I believe a pinch of dark fired is present as well, chiefly due to a slight smoky nuance that I have also detected in the original. The fermented plum topping is the star as it sublimates the tobaccos to a fair degree, though it does allow the varietals to speak to your taste buds. I also sense an added light fruit topping in the mix. The toppings are similar to Orlik’s Royal Yacht, but lack a little of the depth, sweetness, and delicate balance employed in that manufacture. The same can be said for the tobaccos to a mildly lesser extent compared to the Murray’s and Orlik brands. However, the toppings are a little closer to the Murray’s version than they are to the Orlik. The strength and taste levels are a couple of steps past medium, and both fall just short of the Orlik version of RY thresholds. The nic-hit is a rung short of medium. No chance of bite or harshness. Burns cool and clean at a reasonable rate with a very consistent flavor that continues on to the lingering after taste. Has a strong room note. Leaves little moisture in the bowl, and requires an average number of relights. Not an all day smoke. Three stars for its own merits, and two and a half stars as a match. I gave four stars to the Orlik version.

Royal Yacht has been my daily go to tobacco for some time, mostly due to its strength and burning characteristics. :

Strength about the same

Burning characteristics wetter out of the tin so not quite as good as RY, but when dry should be the same

Overall: McConnell have nailed it again! Old sign was another success, if supplying to those of us who love the soon to be discontinued Dunhill blends is the goal.

Summary: a good substitute for the current "Royal Yacht," using the same mixture of strong Virginias and a unique topping.

Some tobaccos divide an audience into polar opposites. You either love or hate "Royal Yacht," the medium-to-strong nautical tobacco that consists of pressed Virginias, some possibly smoked, with potentially a hint of strong Burley, a mixture which is then topped with something that tastes like a mixture of amaretto, honey, and vingar as if designed to imitate the presence of Perique. It smokes easily, delivers good strength, and despite being sweet, is never cloyingly so. It has a low body of smoke like a Burley blend, but the rich flavor of Virginias that caramelizes into a warm, molasses-like flavor. The Peterson version seems to have changed the topping to more of a "1-Q" tribute that is high in vanilla, but "Paddington" retains the original approach, which is handy since the topping complements the natural flavors of the blend. Over the course of the bowl it goes from a plum jam on toast with honey flavor to the darker, heavier molasses and rum type taste, eventually tasting more like a Navy flake at the end. This is a new favorite, and recommended for all who like a stout smoke; for me, it works as an all-day smoke, but the higher nicotine may place it out of reach for many.

Fifth Heritage blend I have tried, and having found from good to excellent the ones so far, I had some expectations...

Well, actually I admit never liking the old Murray-made Royal Yacht (never tried the "real" Dunhill, alas). Too strong in nicotine, quite flat in taste, and with that weird nauseating topping. Paradoxically, I used to prefer the Orlik/STG version: while completely different (it was a plain, unpretentious, smooth Red Virginia... no highs, but no lows), it was much easier and agreeable with me. Boring, but smokable.

This McConnell version resembles none of the two: stronger than the Orlik and with a darker Virginia base, and luckily with almost no topping unlike the heavy handed Murray (compared to which it's definitely lighter in nicotine too). And this is where the good things end.

I see that some other people here like it. I and other Italian smokers find it quite disagreeable, on the other hand. Grassy, earthy Virginias, with none of the sweetness and fruit that I like in this kind of leaf. Quite harsh, carboardy, cigarettish. Not bland, not at all, it actually has body and taste... but it's a taste that I find mouth-drying and unrefined. Half bowl some flowery notes come through (but I wouldn't say it's a soapy Lakeland casing: it's just the leaf), and a sort of peppery piquancy too. Not downright nasty, simply not the kind of enjoyment I want in my pipe.

Definitely not my cup of tea. But if you like grassy and earthy... well, you might like it. It might also have some sort of appeal to Burley or Kentucky lovers, from the flavour profile.

What I really find puzzling is that some reviewers are speaking of a sweet tobacco with a lot of flavoring: my tin was absolutely NOT sweet, on the contrary grassy and earthy, and MUCH less flavoured than the old RY. Go figure...

PS A pinch of this added to Covent Garden is actually a nice experience: it adds some body and strength

The actual blend seems identical (to me at least) to fresh tins of the last incarnation of Royal Yacht, as does the cut. The topping, however, while similar seems much milder than similarly fresh versions. Still, if you enjoyed the last version, you'll like this one.

Purchased From: cup of joe's

I have postponed this for a while now ... I guess this is a very difficult review to write, as the temptation to write it in comparison to the predecessor of this heritage blend is very high. I will try to keep this as a single review, but please forgive me if I cannot refrain from mentioning Royal Yacht here and there. We have a Virginia based blend. To the naked eye it is a very dark blend, with lots of dark brown and black ribbons, and here and there you come across a small broken flake. I am no Virginia expert, but this is not your regular grassy Virginia, no sir. The nose is earthy, with a fine hint of plum topping. It packs nicely, although you may have to break the bits of broken flake if you have them laid out, otherwise you may need a few relights. The taste is sweet, but earthy, nothing but Virginia there, although not the grassy, citrussy light one. It's an upper medium nicotine blend, so you may want to watch your timing with your meal and all. I smoked this in filtered pipes (9mm ceramic), but then again Royal Yacht was another blend that I could only stand with a filter, otherwise it sure messed with my stomach. One question comes up ... where's the plum? While some considered the predecesor as a semi aromatic, I would definitely consider this blend a Virginia with some sort of topping. I say some sort, because the hint of plum is there, but it's more mute than the nose. After the second half of the bowl it seems to come out a tad more, but still quite discrete. I took my time with this. I used three different pipes in trying it out: Rossi 320, Savinelli Venere and a straight billiard Georg Jensen. The latter offered me the best experience of the three for the blend, not sure whether because the first two I used to smoke VA/Burs as well, and the third I keep just for Virginias, or may be the size of the bowl - the first two being quite bulky. When I say the best experience, again I am referring to the expected elements of the blend - so the third pipe better highlighted both the sweetness and the topping. Overall it's a good blend, not a Royal Yacht, or perhaps it's a better version of Royal Yacht for the critics. I would give this a 3/4, and as a nostalgia element I would buy a tin every so often. I am sorry, I cannot appreciate this blend without mentioning the predecesor that otherwise was a 4/4 blend for me.