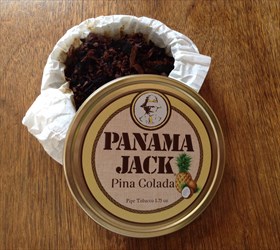 It would probably be unrealistic to think that tobacco could ever be refreshing, or capture the light spritely flavor of a Pina Colada, but that is what Panama Jack is trying to sell me here. If sitting on the warm beach sipping hot cherry medicine is paradise, then I guess ol' Jack nailed this one. To his credit, there was some coconut aroma under all that cherry nonsense, but dear lord was it some heavy ladled on topping. You will really want to let this one dry out for a spell before smoking.

As I've found with other aggressively laced fruit aromatics, the flavor is less intense than the initial tin shock, once you light up. I may be a poor choice to judge this one, as I can't recall the last time I drank a Pina Colada (as I tend to avoid fruit in both my drink and tobacco), but this offering did a so-so job of jogging my memory.

Midway through the smoke, things sort of fell apart, or my buds at least became used to the taste, and I started wondering why I was smoking this stuff. It began to taste cheap with a generic sweet topping.

I find fruit aromatics to be a generally gross idea, but if you are a fan of cherry blends, this might be a blend for you.

Put the rum in the coconut..

I picked up a tin of this after trying the Key Lime in the series. It was also on a pretty deep discount which should of given me warning.

It's a very moist blend even after a year in the jar. I'm guessing its liberally doused in PG. It smells similar to suntan lotion. Easy to pack in a cob and lights fairly easily.

The coconut taste is much weaker after spending a year in the jar after my first attempt. I pick it up more as an aftertaste than in the foreground. I also get fruity/sweet. No tobacco taste at all.

Puff gently or experience MASSIVE tongue bite. I get very little Nicotine from this.

one of those blends that might be good for sitting at a picnic with non-smokers as they will not be turned off by the smell.

I'll def not buy this again, but I'll probably smoke what is left or maybe not. <shrug>

Age When Smoked: fresh from tin to 1 year