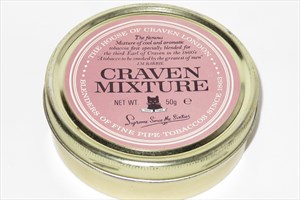 The famous mixture of cool and aromatic tobaccos, first specially blended for the third Earl of Craven in the 1860's. A very traditional latakia mixture.

Notes: Another Murrays brand has just come to mind - Yachtsman, which in the 70s was not an aromatic.
Also in case anyone wonders why Mick McQuaid ( a Carroll's brand) was on our price list, Rothmans International owned a large slice (or all?) of Carroll's, and we sold their products in the UK, including Sweet Afton cigarettes which took their name from the famous poem by Robbie Burns.

Craven Mixture was a beautifully balanced, old-fashioned English mixture – supposedly the “Arcadia Mixture” celebrated by J.M. Barrie – that is no longer made. It began life in the 1860s and was last seen (by me, at least) in the 1980s. There are from time to time rumours of a comeback or a clone, but I've never seen any sign of one. I don't really know of anything that could be called an approximation, with the possible exception of Gawith's Squadron Leader. One can only wonder why so many of these marvellous old tobaccos disappeared yet there is still a market for cherry-flavoured blasphemies and tongue burners.

Ah, I miss CM still. “It's the smoothest and most satisfying tobacco a man could wish for”, says an old advertisement from 1928. In the same advertisement it is advertised as being available in tins and “cartridge form” – i.e. in the soft paper packets that were in use before those wretched plastic pouches came along. CM was to English mixtures what Balkan Sobranie was to Balkan mixtures: the absolute ne plus ultra. The “Craven Ready Rubbed” to which “Holy Smoke” is (I think) referring has nothing in common with Craven Mixture but the Craven name. Craven Ready Rubbed is in my opinion the worst kind of supermarket garbage. Craven Mixture would be highly recommended if you could still get it.

This is not a review, I'm just adding my two penn'orth to the J M Barrie/Arcadia narrative. If you go to the Wikipedia page for Carreras Tobacco Company you will find that the Arcadia brand mentioned in 'My Lady Nicotine' was indeed Craven Mixture. Barrie allowed his name to be used to advertise Craven Mixture, and the factory that Carreras opened in London in 1907 was named the Arcadia works, as was it's replacement in Mornington Crescent. My interest in this subject stems (pun not intended) from my time working at Carreras Rothman in the 70s. By then they also owned Murray and Sons, as well as Alfred Dunhill. The tobacco brands I remember from our price list in those days were Erinmore (by far the biggest seller), Yachtsman, Mick McQuaid (a Carrolls brand which we sold in the UK on their behalf), Craven Mixture (which was very much a minority taste by then) and three other brands containing Latakia that sold quite well - Parson's Pleasure, the mildest, then Barney's Ideal, and Punchbowle the strongest. There may have been others but these are the ones that stick in my mind.

Purchased From: Free to me as an employee

Similar Blends: One on it's own for me. At the time I smoked it I had no experience of traditional English mixtures..

One of the finest tobaccos of its kind that I have very smoked. The Original Cravens Mixture was a middle of the road, deeply flavorful English mixture with sensational Virginia leaf, smoky, sweet and fragrant Latakia, and fine small leaf Orientals that added just enough spice to compliment the overall presentation.

An old favorite of mine from the 70's, long gone from the market in its original form. Simply a well balanced, tasty, and cool smoke that I could enjoy all day and into the evening without switching off. Always lit well, burned cool and dry. One of the few that said "hit me again" as I cleaned the pipe. DAMN, I miss it.

If this was the basis for the fictitious Arcadia Mixture, then I can understand what the fuss is about. McC's Arcadia didn't get it right, IMHO.

Basic English, ribbon cut with tin nose of latakia in front and some oriental essence. I recall smoking this in the early 90's and not being too smitten with it. This revisitation confirmed my initial feelings. Review is based on half a tin from 1991.

Basic in the taste as well. The latakia was upfront but not overbearing, with the usual attendant smokiness and spice. It very well may have reduced in potency over the years but it's hard to say. The Virginias were second in command but didn't have the huge depth of character of a McClellands or Gawith. I would have preferred more sweetness as well. The orientals were present but subdued, lending just a bit of light spice and sourness. I have have preferred them more amped up. All in all, I found this inoffensive and reasonably well balanced more much less assertive than I wanted. Certainly nothing to set JM Barrie's heart aflutter. Nor my own. More of a 2.5 star blend. Just not a ton of presence, but a good set it and forget it. It should be noted, however, that I prefer my latakia blends to be light in latakia, heavy in orientals and with a huge Virginia presence. Standard "English" blends are not my forte. This stuff goes for reasonable prices on Ebay, so if you can find some and it appeals to you, go for it. Squadron Leader aficionados may find a lot to like here.

Craven Mixture is an interesting tobacco in that I normally do not like Latakia blends. I bought a couple of tins of this a while back not realising it had latakia and was pleasently surprised how rich, smooth and flavoursome it was. Medium to dark brown ribbon cut tobaccos with almost perfect moisture, which burned well from the first light. The flavour could be best described as coconutty but definitely not overpowering. I don't know how much Latakia is in this stuff, but it certainly didn't smell like traditional English blends. Definitely worth a try.

This review of the Craven Mixture is based on one half of a two tin set recently purchased from a consignment seller. This mixture comes from the pink lidded tin that I believe is from the 1990's. Based on other reviews, I think it's safe to assume that Craven Mixture had a pouch version, possibly in the final days of distribution. It is only a guess, but my opinion is it's unlikely that the pouch version was the exact same blend as the version found in the tin.

Upon opening CM, the appearance is that of a typical medium English blend. The Virginia's showed some sugar crystals on them. The moisture level was perfect and Craven produces clouds of very smooth smoke. I am sure that the Latakia has softened with age and in this case, it seems to have melded beautifully with the other component tobaccos. With the exception of the aged Virginia's, there isn't very much sweetness to the blend and I imagine that the Latakia was far more forward when it was originally tinned. If you are a fan of aged tobaccos and medium English blends, this little gem is worth the price. Highly Recommended.

I just got around to popping open one of my tins that I had bought in the 1990s, and already aged a few years. This was the original mixture with the pink label, not a replacement or imitation.

The tin aroma was heavenly, with the fruity, sweet scent of matured and aged Virginias that evokes memories of great tobaccos of the past. While smoking this bowl, I tasted the Latakia in this mixture; it was subdued by the 25+ years aging, but present nonetheless. After two to three re-lights, I was able to keep it going with occasional tamping for about a half an hour. The strength and flavour seemed to be constant throughout the smoke that lasted more than a half an hour in a size 3-4 bowl of my bent apple. The Virginias and other components really delivered a pleasant taste and smoke.

All in all, a great smoke, evoking memories of pipe pleasures from the past. Some of the later-day reincarnations of this noble mixture do not do it justice. Once my stash is exhausted, I will miss it. Its memories will encourage me to try to find a suitable alternative. Although I do not believe that I will find an exact replacement, those of us who have been fortunate enough to have smoked it have been fortunate to have experienced a most noble tobacco.

Appearance: A blend of roughly 50% brown tobaccos and 50% black tobaccos, cut short, no pressing evident. Not much contrast in the tin.

Tin Aroma: A strong Latakia smell hits you first (I would guess at least some Cyprian Latakia). Beneath this, aromas of barbecue sauce/Slim Jim, smoky campfire and wet dog become apparent. In short, an overall smokiness which covers any other aromas which might exist.

First Smoke: Again, I used a corn cob. The first sip of smoke came on as a fairly typical Oriental English, that is, dry, mouth-drying, Latakia-dominated flavor, a significant Oriental presence and very little Virginia toastiness and warmth. To be fair, I don?t love this type of blend, with the exception of Dunhill EMP. So, not surprisingly, I find the smoke to be somewhat boring, with little development or variation of flavors from beginning to end, and very little complexity. It isn?t terrible, but I ?m quite indifferent to it. I wouldn?t willingly choose to smoke it again.

Second Smoke: In a Hardcastle Deluxe that smokes English blends like a champ. Unfortunately, the smoke is virtually identical to the first smoke in the corn cob.

Third Smoke: In a ?London Pipe Shop? pipe, a thick briar no-name straight Dublin. Given the lackluster results of the first two smokes, I approached this tobak with some reluctance, on a dog walk at 11 pm, around 22F. I believed that this would be my last smoke ever of this blend. The pouch aroma was of a smoky barbecue sauce, not especially pleasant. The flavor, however, was very different from my first two attempts. Sweeter, better balance, more VA character. Then, did overnight DGT.

On re-light, immediately gave good flavor without bitterness (again, Vas). Not a heavy English, and the bass note is only an accent, with a ginger-like bitterness common (for me) with English blends. A honey-like mild sweetness plays throughout the top and mid-levels, with faint suggestions of licorice, barbecue sauce and fresh-cut wheat. The Virginias play a gradually increasing role, and the toasty/sweet trademark of high-quality leaf is most welcome. In the last ¼ of the bowl, the Vas drop out, leaving mostly a smoky flavor and a moderately ashy bitterness.

Summary: This blend is neither great nor terrible. I would say that it is ?good.? It certainly poses no threat to Renaissance, Raven?s Wing, Celebrated Sovereign, Mc #2020 and a few others. The pipe, or maybe tester? s hydration/dehydration, makes a big difference. If it smoked like it did the first two times, I would probably dump the bowl before the halfway mark. If it smoked like the third smoke, I would smoke the entire bowl without any regrets.

Well, this was bland.

I can't really remember anything of note whatsoever about this tobacco and frankly, I have no interest in buying another pouch to refresh my memory. It's just another one of those 'supermarket' blends that do any good pipe an injustice.

Anyone who thinks that this modern (pouch) version of craven is the arcadia mixture must be living in Neverland.