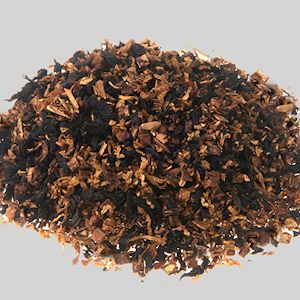 A delicate mixture of golden Virginia with a scintillating touch of fired cured leaf. With some golden burley and black cavendish added, the result is mild, cool, and slow burning. A great way to start the day, or as an all day smoke, Western Sunrise is a truly mild mixture that smells and tastes great.

Notes: A recipe from Outwest Tobacco in Idaho, now out of business, and currently sold by 4Noggins.

I hate being the first to review a blend!

There's all manner of shapes and sizes in the pouch, right from tiny pieces of shag, to coarse ribbons. Although there's lots of different types of cut, the one that's eluded the pouch is big twigs, there's none of those. I'm a bit perplexed regarding any casing/topping/flavouring: the description says none, but the pouch-note and smoke say different.

My favourite thing about Western Sunrise is the volume of smoke: it generates very thick, white, clouds. This smoke is very cool and doesn't bite. At first it's the black Cavendish in charge, until a little way into a bowl: this is where the fire-cured leaf joins in, and adds a little smokiness. I can't put my finger on what, exactly, the added flavour is, but I definitely get one: it tastes a little sharp, and zesty. To be fair this is stronger for the initial part of a bowl then calms down some. Although it abates, I find it present throughout; it's not heavily cased, but the smoke seems to have been embellished a little. Western Sunrise burns steady, only necessitating the occasional tamp.

The nicotine's a little below medium, and I'm not a fan of the room-note: too heavy.

This isn't offensive, but I wouldn't want to have it often.

This came as a small sample from 4noggins. There's a hint of vinegar that is quite different but not unpleasant. Mild & smooth. I'm new to smoking different blends & only just learning to tell what's what. Although stated to be virginia dominant, I can taste the burley. Nicotine is detectable in this one but would say it's below medium. I've got a sensitive tongue & it's one of those blends, like MacBarens 7Seas Royal, that heats up my tongue a little if smoked too fast or too many bowls after the other. That's a shame because I really enjoy the taste of this one & the generous amounts of smoke that it generates. Burns well down to a grey/white ash. Could be an all day smoke for those with asbestos tongues.

Purchased From: Sample from 4noggins.

OK, Outwest Tobacco’s Western Sunrise is aromatic, all the way. So, what’s with the “none” I found listed after “flavoring” in the header? Perhaps it’s some arcane point of tobacco processing/nomenclature? In any case, it has a significant topping that’s to the fore the entire smoke. Which is fine with me, since it’s one of only a few aromatics I’ve enjoyed from start to finish. In the pouch are small-ish bits and chunks of flakes ranging from tan to red-brown, to dark brown, to black. Pouch note is a rich, tropical mélange, with vanilla over sweetened orange and apricot or (more likely) mango, over sponge cake. It handles, loads, lights and burns fine for me right from the tin, though it’s better after a few minutes air time. While the pouch note is nice, the combusting aroma is actually somewhat better, IMO. I’m guessing the VA here is air cured red, with toasted Burley and very little mild KY, along with a goodly portion of black Cavendish. Tastes parallel the pouch scents for over ½ a bowl, and the tobacco tastes increase some after that. For me, the VA is prominent, being slightly earthy, somewhat tart, and mildly zesty, but the Burley holds its own, slightly musty and nutty, also adding some hoppy bitterness. The scant KY adds depth, body and a tinge of smokiness. As for the vast clouds of fragrant, white smoke, I’m blaming the Cav. To me, the qualities worth recommending here are the fairly easy smoke-ability and the nice balance of fragrance and tastes, without chemicals, top to bottom, at least if one first purges the chosen pipe of darker fare and then refrains from tugging. It burns fine for me most of the way, and no penalties are incurred for thoughtful re-lights. Strength is mild; tastes approach medium by the end of a bowl. Room note is very pleasant. Aftertaste is a slightly metallic tapering off of the best of the smoke.

My thought here is, once you’re on board with a medium aro that contains Burley (aka, bitters), you’re good to go. It reminds me of a milder Peterson’s Connoisseur’s Choice. As for “all day smoke”, not for moi, though YMMV, of course. 4 stars.