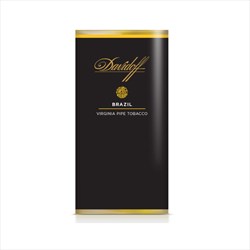 I am not an enthusiast of aromatic tobaccos or Danish blends but despite that I risk to try it. The appearance of the mixture is a ready-to-rubbed thick ribbon, predominating the black cavendish over some golden virginias. The humidity is fine but I preferred to let it dry for about an hour. The smell is tremendous, a kind of sponge cake or fruit bonbon, light well and a sweet chocolate is added to the fruit flavor. The flavors take turns throughout the smoke and last until the end. It does not bite the tongue, but it is advisable to smoke delicately to appreciate the flavors in their magnitude. The flavors are not noticeable artificial or chemical and the tobacco is of very high quality. Leaves a whitish ash and smokes fresh and dry. It is a highly recommended surprise.

I was surprised when I opened the pouch, it contains prominently black Cavendish. The mix includes a tiny proportion of yellow Virginia flecks, but I'd expected a blend named Brazil Virginia to be golden. The moisture's acceptable, it could do with arriving a bit dryer, but it's smokeable fresh. It's been rubbed into a coarse ribbon.

I struggled to identify any fruit/citrus, for the first few minutes, but once a burn had settled it began to come through. After five minutes I couldn't believe I'd missed it! It's not strong, but it gives the smoke a citrusy lift and prevents it being just like any other sticky black Cavendish. Brazil Virginia burns well, giving a cool smoke.

I'm not a fan of the room-note, and the nicotine's very mild.

If I'm honest, I much prefer the flavour while the burn's settling and there's no fruit; that's a three star taste, but the fruit/citrus reduces it to one/two.

At first I was reticent to buy this pouch and for several visits to this tobacco shop (which was the only one so far I've found this blend) since I was concerned with the overall rating and some of the reviews on this tobbacco. Early this year I've finally decided to buy it and what a surprise! I'm quite an enthusiast for aromatic blends and this leaves you glazed to the very scent just as you open the pouch. Even my non-pipe smoker wife enjoyed it (she's my tobacco scent appraiser!). You can easily small the vanilla and chocolate notes on it as well as fruity ones. The taste matches the smell. It gives you a very soft and relaxed smoke, burns mildly leaving you a light ash. The aroma in the room as very pleasant as well

Age When Smoked: New from pouch

I like Lakelands and scented tobaccos and I also dip, albeit infrequently, in a Danish blend, but generally I regard full-fledged aromatics with trepidation. I would never have bought these new Davidoff products to start with, but I was kindly given a generous sample of each and I did smoke them.

They all smelled exuberantly, Malawi smelled of butterscotch, Brazil of tropical fruit and Argentina like a sweet Christmas pastry.

They all seemed to need some drying time and I obliged without letting them dry out completely. All took to light easily and burned well, fairly dry and cool, without need of relights. None produced any tongue bite to me and all smoked well to the end without becoming harsh or moistening the pipe excessively. So these blends do not seem to consist of inferior tobaccos heavily cased to mask the dullness or harshness of the tobacco, on the contrary these are extremely well crafted aromatics.

Now as far as flavor is concerned I got what I smelled from all three. With Brazil in particular there is zingy tropical fruit/citrucy taste that lingers. And I could still taste tobacco. I also tried it completely dry (still burned cool and did not become harsh) and it did taste even more of tobacco. I actually preferred it completely dry. The only problem for me is that the taste is not only exuberant, some Lakelands are also exuberant, but that the taste of the casing is a little bit artificial and I think I prefer tobaccos more naturally aromatized. I do not think I would ever buy these tobaccos, but since taste is subjective and quality-wise these blends seem to me to be very good for what they are –i.e. full-fledged aromatics, I will give them three stars. Were I more experienced with true aromatics I might have judged them differently, so take my review with a pinch of salt. Actually for their category they might very possibly merit four stars…

It has been a long time since i opened an aromatic.my choise aromatic this time is Davidoff Brazil.once the seal brakes a smell combined of honey and butter comes out.a deeper smell reveals some vanilla and citrus notes.the blend is mostly consisted from black cavendish with some spare bright virginias,with almost proper moisture.lights ok with a few relights needed.while smoking the flavours are not so strong than expected from the blend smell.B. cavendish are dominant offering honey,vanilla and some butter notes.virginias are in the backround offering citruses and some grass notes.some spicy notes also pop up.generally the flavours combine in a balanced way.burns at medium speed,medium hot with a lot moisture being created to perfect ash.nicotine level is low with some tongue bite and a sour aftertaste.room note is pleasant.generally this is a decent blend nice for a morning smoke.

Overall the mixture looks like classical Danish Aromatics, if you smoke slowly no tongue bites.

Tin aroma is delightful but you can't feel the aroma when smoking. But you can puff some sweet smoke.

Though i was very careful and having a relaxed Smoking but i felt the tongue bite first few minutes i couldn't feel the flavors, but after 5 minutes it was hitting like anything. flavor was strong and covering the tobacco flavor sweetness is very clear flavor is some kind of hot lemon was not a very good experience but i may let it age for some time and give it another try

Age When Smoked: direct from the pouch

This is my regular tobacco. I started smoking it when my local tobacconist stopped stocking Stanislaw's range with military aircraft on the packets. I used to smoke Black Cavendish (with a De Havilland Mosquito on the packet) which I'd mix at a 2-1 ratio with their Balkan Latakia (Messerschmitt BF 109). Davidoff's Brasil is a lovely alternative, full of flavour without being overpowering, and satisfying to the end of the smoke. I'd better put some tasting notes in. Citrus, chocolate, and a strong presence of Cavendish, but balanced by Virginia so it's a full positive flavour. The only problem is that it's so pleasant I'd happily smoke it all day, which would ruin my health and marriage! It's also substantially cheaper than Dunhill's tins - standard, my mixture, or early morning (now produced under Peterson's name). This makes it a very viable "every day" smoke.

Pipe Used: All my pipes!

One of the more common tobacco blends and usually on the cheap side. This one gives a nice "fruity" flavour that I didn't enjoy as I found it sour (the citrus flavour maybe?) but it lasts for much of the duration of the smoke and emits a somewhat nice aroma to the room.

It burns relatively nice but I find that it gets the pipe hotter than other similar blends. It 's cheap enough to give it a try but in my opinion the Argentina blend of the same company is a much better choice. Since there are much better ones in the same price range I wouldn't recommend it.

This is one of the most misleading names ever given to a blend. To start with, there's little Virginia in it, its main component is black cavendish. I assume it's about 70% black cavendish, 20% burley or similar, and 10% Virginia. It does smoke decently though. Everything is mild in it, one-sided taste, no much development. Stanwell Sungold comes to mind when smoking it, especially, the new sungold blend, which is almost a copy of Brazil Virginia by Davidoff or vice-versa.

Too much cavendish is a recipe for a disastrous blend, and this one has a lot of it. It's mild, it won't offer that hour long enjoyment, it's rather something you smoke in between blends.

All in all, I can only recommend it for beginners.

The pouch note is breadish-sweet, vanilla prominent, with a fruit-ish overtone. The leaf is black with a few rare bright highlights in there. Lighting is OK from a fresh pouch, but some drying time makes things a little easier. The flavour is less sweet than expected, with just a little touch of spice about halfway down the bowl. As all mostly-BC mixtures, this one burns hot, so sip slowly. I have a goodly amount of dottle at the end, though less when I use a larger bowl. I wish there were some nicotine in there, though.

I arrived in Dubai out of Navy flake. I went in the duty free and picked up this Brazil Virginia. As soon as I opened it I realized there was no Virginia tobacco in this blend. Smelled nice in the pouch. Smoked flat, hot and wet. One dimensional. I would rather have mixture 79 than this. Dubai Duty free needs some quality pipe tobacco.. all the Davidoff pipe tobaccos remind me of freebasing windex. .. one star.. leaving pouch open for two months slightly dried this out and improved it... next time I will microwave it.