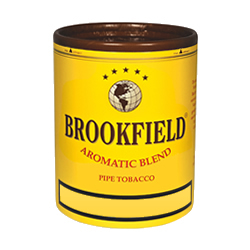 An extremely mild, aromatic mixture with an intriguing flavour of vanilla and spices.

Quick Synopsis: A delightful cavendish mix with burley and virginia. The interplay of the flavours is a must for long consideration. A vanilla coating that's very sweet at first, but quickly burns off into a vanilla room scent which just about anyone would love. Must be smoked carefully or a nasty chemical taste builds up.

I bought this packet of tobacco when placing an order to the U.S. - I primarily bought it because it cost $2.99, whereas the cheapest I can find tobacco here in Windsor, Ontario is $12 for 50g drugstore brands or $20 for 50g tins. The prospect of a three dollar packet of tobacco was astounding to me. I started with drugstore aromatics, and have sinced moved on to Englishes and Orientals, but it's nice to go back sometimes. On to what it's like..

Pouch: My nose tells me that this tobacco is heavily cased. It exudes a thick candy smell, something like caramel. I can definately smell the vanilla, and traces of some other spices which are overpowered by the caramel. The tobacco looks to be an even mix of nicely cut ribbons, going from a dark tan to a brown.

The pack: The tobacco packs well, though isn't springy - more clumpy when compressed. I suggest that this is due to the casing.

The light: It lights very well on the first match. I'm instantly enthralled with a smooth wave of caramel candy.

The beginning: This tobacco is very smooth and enticing. It tangs a bit with my coffee, I suggest this would be good with sherry. A ghostly vanilla taste is present, with hints of other spices. A tiny bit of burley is here in flavour and force - I can tell as even a miniscule bit of burley irritates my nose and throat.

The room scent: I leave the room to check the mail - to get a good sense of the room scent, and, to check the mail. On the way back I realize there's an awful raunchy aftertaste in my mouth. Reminds me of a caramel sucker that's been rolled in a cigar ashtray. But when I reenter the room, a lovely smell of vanilla greets me. Very mild, and definately sweet and vanilla-y. My girlfriend would appreciate the room scent - the biggest plus yet.

The Relight: The bowl relights easily enough with one match (ignoring the fact that I drew a rogue match which wouldn't light). The same vanilla caramel taste is here, stronger now, with a potent hit of burley. After a few minutes, a strong taste of cavendish and virginias becomes present.

The middle: The tobacco flavours are out in full force now. I would describe a strong taste of virginia, burley, and cavendish mixed, with a hint of other spices (something like kitchen herbs), and little to no vanilla/caramel. The tobacco is starting to burn very warm. Borderline too warm. The burley makes me sneeze- it's definately pulling on top. Shortly after, I retamp and find the tobacco has much more give than when I first packed it. I end up tamping too tight, and it starts burning hot. I think it could use a spritz of water in the pouch, though it doesn't feel too dry. After I dump the ash and mix and tamp, I get a minute of vanilla flavour, then the burley jumps on my head again. It's definately still burning hot; I rest the pipe for a full minute and a half and it's still very much lit.

Towards the end: The aromacity and casing has completely burned off! I'm very much enjoying this now. It's a rich mix of cavendish and virginia, with a good helping of black cavendish and the burley (which is irritating me less now). I leave the room for more coffee and return to be greeted by a lovely cavendish scent. Very reminiscent of Captain Black Gold. The aftertaste remained however. Back to the pipe, 'cavendish' is the one word I'd use to describe with right now. Very pleasing. On occasion a slightly sour taste creeps to the back of my throat, but coffee washes it away. After the last relight (4 relights on this bowl, pretty good for me), a very very strange interplay of virginia and burley begins. A hit of chemical flavour comes in, I've tasted it before in German tobaccos (especially PPP), it reminds me of the industrial degreaser I use at my part time job in a kitchen. Great for 3 year old grease, bad for smoking. As the bowl dies off in its silent vigil, I sit in reverance of the excellent mixes of cavendish with the other tobaccos, and their graceful interplay. The aftertaste is unquestionably rancid, something like turpentine, industrial degreaser, and vanilla.

Conclusion: This tobacco, although only costing $2.99, is a great blend. It has a great room scent for non smokers and a delightful tobacco interplay for the smoker. I will smoke this more often, though when I've time to just sit there and smoke it, not when it's hanging out of my mouth while playing GTA. I had a bowl of this before which I was not careful with, a terrible mistake - all I could taste was nasty chemicals and vanilla. The aftertaste leaves much to be desired. Infinitely better than the last German tobacco I had - PPP Irish Coffee, which reminded me of how we put out the campfire in boy scouts.

Sold in France as "Brookfield No. 1"

Boring, with a wimpy cherry note. Very heavy on the nicotine (and I've been smoking for over 50 years). To buy only if absolutely nothing else is available.

11/24/2005: Highly recommended as an Aromatic. Real tobacco taste in a tasty, flavored blend. Vanilla is the dominant flavor. Ny pouch was bone dry, almost brittle. The big plus here is quality, taste, and aroma. I almost never rate tobaccos above "pleasant to tolerable", this one has an exceptional aroma. Minuses: Burns faster than I like, a bit tough on the tongue although no real bite. I may try adding a bit of moisture to this pouch and see if that slows the burn time a bit. Also for you nicophiles...it is fairly satisfying for an Aromatic.

A good mild all day tobacco with a little vanilla flavour. But not as dominant as in other ones. Also I can't find the citrus taste in it. The tobacco is really cheap and therefore a good alternative for an all day smoke. There are no tongue bites at all and the tobacco has a very cool smoking temperature. For me it was ok but I prefer Mac Baren's Virginia No.1 more.

I got a small sample of this tobacco from my tobacconist. Let's start by saying it's not a bad tobacco, but it's not great either.

In the pouch, its smell may appear as somewhat "synthetic" but in reality it's just rather concentrate. Fruity and pleasant, reminds me of cherry tea. The texture of the cut is very thin and pleasant to the touch. Filling the bowl is a real pleasure.

It burns quickly, probably due to the very thin cut, so don't expect to smoke for long. However, despite the larger surface area it is hard to keep lit. Probably it's due to its humidity just out of the pouch.

The taste is mild, and so is the strength. It's almost like smoking air. The aroma and the notes, however, are pleasant and remind of cherry and vanilla.

I recommend it for first time smokers and those who don't like the nicotine kick. For an experienced smoker, this blend is probably nothing to be remembered, yet it's probably a good choice once in a while, to break the routine with the favorite blends.

I am reluctant to review this compared to the other reviews because I think I may have gotten a bad pouch. The tobacco smoked ok but the aroma in the pouch was horrible, smelling more like syrupy rotted fruit than anything else. Did not smell as bad when lit. I found it hard on the tounge and palate as well. After a few bowls I ended up tossing the rest.