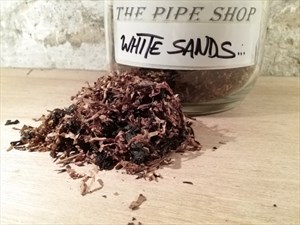 Hand blended exclusively in store. A light mixture of ribbon cut Virginias and a little black cavendish infused with rum, summer fruit, and coconut, to bring you the flavour of a tropical shore where warm waves tickle your toes: welcome to White Sands.

I enjoy it when a smaller company introduces a blend that's as good as the more eminent companies offerings are. And that's what The Pipe Shop have done with this.

The pouch smells aromatic, but not perfume or flower like, it's sweet and rummy. The mixture looks quite coarse, there's a few broken flakes in there. Virginia accounts for a higher proportion of the blend, it looks as though there's less than 20% Black Cavendish in there.

I find that the coconut offers the least flavour, it doesn't seem absent, but it's not in the same league as the rum or fruit. The rum comes over well, my only issue with the rum is it can become a little bitter when I puff my pipe over zealously. To me the fruit/citrus appear to be berries of some sort: slightly sharp, yet also flavoursome. The flavour's not acidic enough to be from oranges or lemons. I don't get much character from the tobaccos, it's clearly prominently virginia, but the topping's quite heavy, well actually it's strong! The nicotine's about medium, and it doesn't give much tongue bite, unless I puff like crazy. And to round this review up, the room-note's very nice.

Purchased From: The Pipe Shop