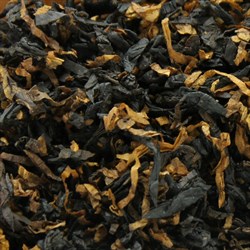 Notes: From the G&H Catalogue: Exceptionally light, sweet, smooth vanilla flavour combine with a top-note of fresh, ripe cherries. An excellent pipe tobacco for both new and more experienced smokers. The pleasant room aroma will make the smoker popular wherever they choose to smoke their pipe.

Due to EU regulations, this is now sold in those countries as "American C&V".

From the description I think "oh joy, ANOTHER cherry aromatic", HOWEVER I must admit I am quite impressed by it. Firstly, upon opening it I can ascertain that the usual "sledge hammer" of cherries that goes hand in hand with cherry aro's isn't present, in fact what I actually get is a gentle fruity note of cherry with a subtle vanilla addition. To be fair, this one is a little too moist, that said I leave mine to air for a few hours.

Once the right level has been achieved I greedily fill my pipe and set to. Ignition of this one (providing you let it air enough) is a simple task, quite a shortish go with the flame is just enough of a catalyst for a steady smoke. The burn is a really even one, not extinguishing itself unless left unattended too long. The temperature of the smoke is neither too warm or too cool , a pleasing "mid temperature" which can be enjoyed at full throttle without becoming exacerbated by tongue bite. Now , on to taste, superb! Like the unlit aroma it IS NOT a massive cherry bomb, actually the cherry is very mild in comparison to other cherry aro's leaving some room for the vanilla to come to fruition in the mix! Because the aromatic side is not strong, the tobaccos can also be appreciated in this very thick/creamy smoke. Vitamin N? Again flawless :not indomitable, not weak but just right! On to the room-note: very full and also (a negative for non-smokers) it has a fairly thick consistency in the air, so I suggest that this is enjoyed alone! Due to the gently added aromatics the pipe remains quite clear of ghosting unless regularly smoked without maintaining it.

This one scores so highly for me because it is completely unorthodox for a cherry aromatic: bite free, not harsh, no and gently sweet!

The burley is nutty sweet with some earth and wood as the lead component. The Virginia cavendish is a little grassy with a touch of tart and tangy citrus in a back up role, and often not very noticeable. Not sure if the black cavendish is vanilla sweetened, but I think not, mainly due to the sugar content. Everything plays second fiddle to the toppings. The cherry is smooth, and fruity sweet with no chemical taste. The vanilla plays a strong supporting role, but kind of weakens near the finish, as does the cherry. The strength is a step past the center of mild to medium. The taste is medium. The nic-hit is just past the mild mark. Burns cool and clean at a reasonable rate with a mostly consistent sweet flavor. It needs to smoked at a moderate pace or you risk a little tongue bite. Needs some dry time, and leaves some moisture in the bowl. Requires an average number of relights. Has a short lived, pleasant after taste and room note. Two and a half stars.

There are various descriptions of this blend and they are all different. The above description says it contains "Red Burleys with cavendished Virginias". SmokingPipes (where I bought it) says "is comprised of various Virginia varieties". PipesandCigars says "sweet, golden Virginias and a soft, smooth black Cavendish". Looks and tastes to me like PipesandCigars is correct, but I've been fooled before so I could be wrong. Anyway....

What I'm assuming is Black Cav has the biggest input as far as tobacco flavor goes. What looks to be golden Virginias has only a minor input. The vanilla is the stronger added flavoring and the cherry is complimentary to that. The cherry fades a bit as the bowl progresses leaving what taste like your basic black cav/vanilla flavor. It's a fairly pleasant smoke, but it's a long way from 4 stars for my taste. 2 seems right.

This is mild to medium all the way around. Burns quite well.

This was the first pipe tobacco that I ever tried. It was recommended to me by my local B & M store, as they said it was great to start on. I find this great tasing tobacco, the cherry notes are strong but to me this blend tastes more natural than the stand alone American Cherry. I still smoke this blend regularly. I find sometimes when the tobacco is fresh it is a little bit too moist so I tend to dry it slightly. What I do like about this tobacco and I suspect why it is such a big seller is that it is a very cool smoke, I have never had any form of tongue bite whilst smoking this, even as a beginner.

Purchased From: Local B & M & http://www.gqtobaccos.com/pipe-tobaccos/gawith-hoggarth-american-cherry-vanilla/

I bought this blend because the tobacconist insisted, but also because I was curious to see what GH could do with cherry flavouring. My only previous experience with cherry tobacco was SG Black Cherry, and I hated every moment of it.

I’m not into aromatics, cavendish aromatics in particular, but this one is really delicious. Vanilla and cherry are very light here. I never doubt I’m smoking tobacco, and a very good one. It just slightly tastes like cherry & vanilla, in a way that aptly complements the tobacco. It’s never too sweet, it’s never goopy. It burns rather fresh with a slightly higher amount of nicotine one would expect from an aro.

All the GH’s blends I like (Ennerdale, Bob’s Chocolate, Balkan Mixture) are all in a different typology, but I’m likely to buy some more in the future, when I need a change of pace or something lighter.

Age When Smoked: Fresh from counter

Not quite sure why I bought this particular blend, it's just that I was making an order of several blends in my nearest B&M shop to try and this one brought the tally up to a nice round 6, besides, I rather like both cherries & vanilla.

Back at base I dug out a freshly refurbed International Selection sandblasted billiard estate pipe and opened the packet. An equal mix of jet black and dark tan flakes that had a sweet aroma though I can't swear I smelled either cherry or vanilla. Rather moist & very sticky, packing was a breeze.

It took several lights to get this particular party underway so note to self...let it air for an hour or so. Initial flavour was strangely mushroomy, a first for me in a tobacco but certainly not cherry nor vanilla. In fact at no time during the smoke did I detect either of these 'flavourings'. Only mid bowl (after a couple of relights) did I start to actually enjoy this blend. At this point I was smoking a medium tasting tobacco with nothing in particular in terms of 'flavour', just mild tobacco.

Will I buy this again? No, I doubt I will, in fact I shall give it a couple more goes over the next few days then dump it in my bailtop jar where my Dunhill Nightcap and my Erinmore Balkan Mixture reside in the vain hope that something enjoyable might one day emerge. (This jar is where I dump my none too favourable purchasing errors).

Certainly glad I tried it but it's just not for me. Two stars only from this piper. Let's hope the other five I bought today have a little more to tickle my fancy.

Purchased From: Harvey's of Redruth, Cornwall.

Similar Blends: Nothing yet tried..

One of favorite H&G Aromatic Loose blends. Straight out of the pouch, it smells like a candy story. Though it doesn't smoke much like it smells, the combination of fruitiness and tartness of its cherry flavors, mix very well with the sweetness of the vanilla. **Very highly recommended to smokers who have yet to tried aromatics.