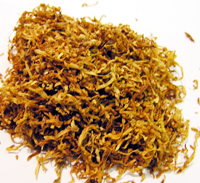 A mild Virginia dressed with coconut.

The mildly citrusy, grassy Virginia also offers a light woodiness. The coconut topping mildly tones down the tobacco. The taste is just past the mild mark. Has a very mild nic-hit. May bite if puffed vigorously, and burns warm and fast, and may get harsh as well. It has a consistent flavor, though it lacks depth. Leaves no moisture in the bowl, and hardly needs a relight. Has a decent after taste. An all day smoke.

This blends alright, but if I'm honest, it's pretty much like any-other Coconut aromatic out there.

The appearance isn't a surprise: a fine golden shag. The moisture's good too, but in all fairness most of the J. Barber blends have been decent with that.

Once it's lit the flavour's nice: Coconut and Virginia, what else is to be expected?! The nutty additive's good as neither is it too heavy or too light, it's just the right quantity to improve the flavour without controlling it. The thing that isn't nice though is the bite. I can only tolerate smoking this for a few minutes.

The room-note's good, and the nicotine's mild. If it weren't for the bite I'd recommend this, but due to the bite it only just scrapes together two stars.