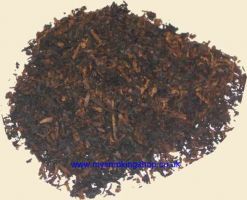 Kendal Dark Vanilla is a blend of dark fired and air cured Virginias, cut into a fine shag, and flavored with natural vanilla extracts.

This is Lane's 1Q for people who like some nicotine in their pipe.

Seriously, the faint but persistent taste and aroma of natural vanilla plus something like caramel or butterscotch takes the edge off an otherwise unrelenting Lakeland shag. The flavoring here is done "just right" for what I'd call a "semi-aromatic".

Something about the flavoring does round off the edges and makes this much more palatable than its unflavored brothers (or cousins).

Ok, this is not an alternative to 1Q, as this has about 1000x the nicotine. However, to me, there is some kind of parallel. The room note is reasonably nice, the flavor simple, the strength, strong, the bite, zero.

Entering the American market at the same time, Kendal Dark Vanilla smells in the pouch like the vanilla used in the Brown Flake Virginia, but that is where the comparison ends. It is moist to the touch and but dries very quickly. Being cut so thin, it makes for an easy pack but I would suggest playing around with the firmness of the pack for the best outcome. At first light, the leader of the show is the dark fired with the Virginia and vanilla in the background. The vanilla, for me becomes a little more apparent about a third of the way into the bowl. It doesn’t bite, but will burn a little hot if pushed. The dark fired has that same smoky, earthy and slightly herbal quality found in Dark Flake Unscented and Kendal Dark Thick Cut. I guess this could easily be called an aromatic, but for me, it is a dark fired blend that is softened out a bit with the vanilla. There is considerable strength in this blend, although it didn’t knock me over. I think that KDV would appeal to those that enjoy Dark Flake Unscented and Kendal Dark Thick Cut rather than aromatic smokers.

Now this is my kind of smoke. Has some strength to it, body-wise and nicotine-wise. The flavor is somewhat simple yet satisfying. Mildly smoky, mildly floral with a fairly strong taste of natural tobacco and a mild hit of vanilla. I love this stuff. My bulk bag came a bit wet and required some drying time. Burns perfectly, quite often requiring only one match. I'll be smoking a lot of this one.

Medium to full in body and taste. Flavoring is mild. This is a gem. Same results in briar, cob, or clay.

EDIT: I intended to say something about drying this, but forgot. Getting old sucks. Don't let this get bone-dry. It'll be a bit harsh. Let it get a dry feel, yet still be pliable. Then it's just right.

A decent smoke really, I find the dark fired Kentucky to be the dominant voice here. In fact, it's maybe 80% of the voice. I'm reminded of MacBaren Bold Kentucky, as I can barely detect the vanilla topping or Virginia. I like dark fired, so this is pretty enjoyable, but vanilla in the name kinda threw my expectations. It's a real stretch to call this aromatic.

Bulk fine shag cut, reasonable moisture when received (maybe even a touch damp), strong pouch note of dark fired. I thought I detected something gingerbread-spice-like in the pouch, but it doesn't come across in the smoke. Tobacco is very high quality, in line with all things Gawith.

There is just enough of the vanilla and dark Virginia present to tame the rough edges, but it's definitely subdued. I chuckle to myself thinking of an Englishman blender being asked to "add some vanilla" to Kendal Dark. Like a dry martini, he waved the bottle of vanilla over the tobacco and called it good.

In summary, I find this to be a stronger take on Old Dark Fired Ready Rubbed, more like a hypothetical bulk version of Bold Kentucky Ready Rubbed without the vinegar casing and slightly softer edges. For the quality, it's also a rather good bargain.

The description for the tobaccos is the same as they are for Kendall Dark as they are the same thing. he boldy earthy, nutty, woody, smoky, mildly sweet and spicy dark fired Kentucky is the star with the earthy, tangy and mildly fermented dark fruity, woody, floral Virginia in the background. The vanilla is lightly applied, and doesn’t tone down the tobaccos much at all. It mostly adds a light sweetly smoothness to take the edge off some of the roughness. I also get a small sense of caramel from a topping as well as a very light Lakeland essence. No chance of bite or harshness is present. The nic-hit is medium to full. Burns cool, clean and a little fast as shag cuts will do, so a slower puffing cadence is advised. The flavor is consistent from start to finish. Leaves virtually no dampness in the bowl, and needs few relights. Has a pleasantly lingering after taste. Not an all day smoke, and I recommend a smallish sized pipe for this blend.

I love the pouch-note from this: vanilla and tobacco, what's not to like?!! The blend's a medium cut shag, with a good amount of moisture. The flavour from the smoke is a bit milder with vanilla than I expected from the smell; it allows a lot of the tobacco's (especially the Burley) to come through. I find the added flavouring's a nice weight: it's just enough to enable notification but it's not too strong. The burn's good, and although it's a shag cut it's not that warm. The speed does concur with a shag though: it's pretty fast. The nicotine's good for the whole day: medium, and the room-note's nice.

This is a good vanilla aromatic, not the best, but still worth three stars.

Kendal Dark Vanilla is still very recognizable as starting out as Kendal Dark. The tobacco has the dark fired's spice and earth, with a deep tartness from the Viriginia. Those are indeed the dominant flavors. I pick up a touch of Lakeland essence, too, and it nicely complements the Virginia. The vanilla is always noticeable, but it is light enough that I might have thought I was detecting a slight addition of tonquin were it not for "vanilla" being part of the blend's name.

This is precisely the vanilla blend I always wanted to find. I wanted to taste bold tobacco with just a bit of softening from the added vanilla flavoring. I also wanted a good belt of nicotine, which this has. The strength is strong in terms of taste and nicotine, but I do not find the nicotine overwhelming. Being a shag cut, the leaf lights and burns well. Figuring out just how tightly to pack the tobacco takes a little trial and error, but once one does perfect the packing relights are rare.

Mottled shag cut with a pouch scent of vanilla, although it struck me as more of a butterscotch/caramel. It was sweet smelling with the slightest bit of pure tobacco underneath. Mostly it's aroma was of basic aromatic. Came wet in the bag but dried out quickly. Based on 1/2 oz as I used the other half ounce in a blind test.

I am no fan of the regular Kendal Dark, as I found it too harsh with the disquieting tendency towards removing all the saliva from my mouth. I recall thinking that it needed something to be a good smoke. It never occurred to me that what it needed was some flavoring. Mostly burley-forward, the vanilla flavoring is noticeable as a flavoring but not necessarily anything specific. Most apparent in the snork, I do not consider this a flavored blend as much as I consider it a sweetened and toned down blend. The basic flavor of Kendal Dark is retained - a dark, hearty and robust earthiness, but it's got the sweetness I prefer in most tobacco with this version. Again, this is a true aromatic pipe blend with the tobacco taste front and center and the flavoring used as an enhancer rather than a blanket. Don't let the word "vanilla" in the title throw you. I thought "vanilla" (more caramel) when I sniffed it but "tobacco" when I smoked. Smokes dry and doesn't need much drying time prior to loading, as it dries fairly quickly. A solid smoke that I will come back to on occasion.

This shredded wheat biscuit was so thinly spun, it reminded me of a ball of hair cleaned out from a brush. The aroma wasn't much beyond a woodsy, lightly sour, natural affair. The real flavor developed once lit.

After the match found it's home, a deep burly smoke arose with a mysterious back note that must be the "Lakeland" flavor. Iv'e read this is supposed to be a soapy taste, but I found it to be a peculiar toned down English that lingers on your tongue. I can only describe it as a distillation of antique store dust. Dry and heavenly. Not sure where the vanilla is, so don't buy it to satisfy a sweet tooth.

I had a lot of fun with this one. The taste and cut of it brought needed variety to the hobby.

This is one of my favorites.Just enough vanilla to be noticed,which truly compliments the tobacco's used and just like other G&H blends it contains quality tobacco that definitely shines, especially when sipped.The shag cut is easy to pack and burns well but just like most shags you have to mind your cadence or it will get hot.With the right cadence it is a very rewarding smoke.I pick up the Virginia's first maybe from the light sweetness from the vanilla, I pick up the Burley second and it's definitely overwhelmed by the Virginia's,imo,but I still pick up a slight nutty smoothness from the Burley,it's just a little muted but present none the less. I give mine a little drying time but not much because the last two times I have gotten this it's almost been perfect moisture level. I get the 500g bags, that's how much I love this blend.Dont know how well it cellars yet but my other G&H blends have cellar'd very well so I am hoping this does the same.It burns down to literal white Ash with the occasional minor moisture/dottle left behind. I have and would recommend this to an aromatic smoker who wants to try something a little stronger and alot less cased than most aromatics but still topped, actual tobacco flavor, and a decent amount of nicotine (which I love).Do yourself a favor and pick some up because I don't think you will be disappointed.

Age When Smoked: The day it was delivered

Similar Blends: Kendal Dark but with a slight vanilla topping..

Coming from somebody who smokes Dark Birdseye or Coniston Cut Plug almost every day: Not bad, but not memorable. The vanilla is a minor player. It pairs well with the blend, but it's nowhere near a "vanilla blend." But, see my other reviews - Kendall Dark is not one of the most memorable G&H blends for me anyway.