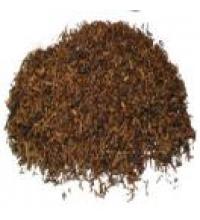 Hmm, I wasn't too sure as to what to make of this at first. The blend doesn't only contain Virginia; to me, it seems to be a mixture of Burley and Virginia. The pouch note has a sort of clove like quality to it; not a huge aromatic addition but it does seem as though a form of topping has been used. The appearance of the mix is mostly medium brown ribbons with the occasional speck of dark. It's of a fabulous moisture to be imminently smoked, so let's discuss:

It lights easily and gives an even burn. At first I can only trace a VERY small addition of extra flavour as I did in the aroma from the pouch but sadly any of the pleasure that could be bought from this flavour is spoilt by the heat of the smoke: it's hotter than a furnace! Although it's too hot, if I stick with it long enough the flavour becomes stronger. Sadly, this flavour isn't good; it's acrid and unpleasant.

The smoke carries a nicotine amount that's not too much: it seems pretty mild to me.

I wasn't too sure what I'd make of this GH offering at first but now I know: