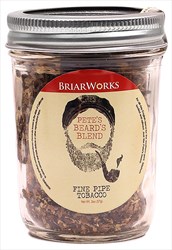 From Laudisi: An all-day English blend for the southern gent. Medium bodied and refined. Just like Pete's beard.

Pete’s Beard is a solid English blend with some very cool packaging arriving in a Mason jar as opposed to a tin. The name, inspired by of the true gentlemen in the pipe world, pipe maker Pete Prevost, PB is one of those blends that arrived pretty much as described. It is a medium body English that could be one of those “set it and forget it” all day blends. There is no bite, no surprises, just a basic English blend with a medium amount of Latakia that adds enough smoky flavor without being overwhelming. The Virginia's and Orientals don’t offer much sweetness, but work well with each other. Pete’s Beard burns clean and dry with straightforward flavor. Those looking for a middle of the road English blend will find it here.

Pete Provost sent me small samples of his blends - about 2 bowls worth, so take this for what it's worth. This one came very dry, which was great. Mostly light colored long ribbon cut and a non-descript, mildly latakia bag nose.

In the bowl this was a cool and mellow latakia blend. Usually I comment about which of the components are upfront and so forth, and I guess the latakia was upfront, but barely. This had the recent C&D tendency towards over-robustness, as if the Virginia was actually burley. Almost zero sweetness that I noticed. It tasted like a smallish amount of latakia on top of a hybrid of Maryland and high nicotine burley. Most of the flavor of the base tobaccos had been sweated out and I found it bland. Hopefully NOT like Pete's beard! Would love to see what someone like McClelland or Watch City could do with this recipe. As it is, it's just sort of "there"... something to smoke that doesn't generate much enthusiasm from me. But again, two bowls worth. Not something I'd care to purchase.

Va/Lats are tough to get right - at a minimum you've got to have an excellent mix of yellow and red Virginia varietals and careful application of high-quality Latakia.

This is pretty much beyond C&D's capability. The VA in Pete's Beard is raw, rough, and doesn't stand out either as tangy high notes or bready low ones. It tastes flat and young. The Latakia is there in appropriate proportion to the Virginias, but all that does is amplify the disappointment since it doesn't distract from the poor quality of the foundation of the blend.

Pete's Beard would have benefited from the addition of some Turkish, as well as better Virginias. Having tried a jar of this, and sampled the Bacon Old Fashioned, I'd be embarrassed to put my name on the jar. I don't think it does the Briarworks name any good.

ETA: Iwan Ries has this listed as a Burley, Latakia, Oriental blend. That would make more sense, dumping some low-grade blender's Latakia into a jar of Carter Hall match might be something C&D would try.

The more I smoke this one the more I like it. It's one of those English blends that has just the right "weight" to it for my preferences. It's kinda right in the middle when considering strength, amount of Lat smokiness, and amount of sweetness compared to the multitude of English blends I've smoked. As an added bonus it goes extremely well with a strong cup of black coffee. The burn is perfect and it's ready to smoke right out of the jar. On top of all that it just plain taste good. This is an all day English. It's smokes the same in briar, cob, or clay.

Unique packaging, but be careful when you remove the lid, it has a tendency to spill out because it's brimmed to the top! It has about an equal share of yellow and brown ribbons but far fewer black ones. To me this nearly qualifies as a shag, the cut is that fine. The blend itself is a bit dry, I'm not convinced the jar's up to the job, it looks pretty but a normal tin might seal it better.

Because I enjoy an English as a morning smoke I chose this today. I can see how this would make a great All Day blend, but I have English's in the morning and want more 'oomph'. The Latakia gives quite a mild character, as opposed to being heady and overly smoky. The Virginia's presence is indisputable, it doesn't get lost behind the Lat' (a common problem with English/Balkans for me). Although the main flavour's nice enough, a more 'sprightly' English, there's a sour/lemony top note which secures my rating of two stars; especially after halfway when it gets stronger. That, and the speed of the burn: fast.

I smoked worse but I've smoked better. The Virginias aren't spectacular, they irritate my sinuses as Virginia often do early on in the bowl but with little payoff; that is they don't seem to sweeten or develop. The balance with the Latakia isn't bad and I like this sort of a light Lat blend but I'd much rather reach for something like Squadron Leader or Ashbury if I wanted a Virginia forward English. Go slow to keep it from getting harsh. Had a hard time finishing both bowls and don't know if I will finish this sample. Left a fairly bad aftertaste; my mouth taste like I ate an ashtray. Out of 4 stars I'd give it 1.5-1.75. To earn 1 star or less it has to be as despicable as something like Black Ambrosia and PB isn't even close to that horror. Depending on your smoking rhythm and pipe maybe you will get better results. This taste very young so I think this may get better with age if the Virginia would sweeten or at least mellow.

I bought this one bc I liked the back down south I bought from them. And wanted to see what their English was all about. Odd that the shop stocked the line, as it mostly caters to older gents. Maybe I'm changing the business model haha.

Anyway. It has a bit of a sweet smokey nose to it, which is to be expected. It comes fairly dry in the jar, and is almost a cigarette cut ribbon. It's really jam packed in there too, being a full 2ozs. (America!) Mostly yellow with varying browns thrown in. It packs, lights, smokes and burns very well.

The taste is decent, but it grew on me the more I smoked it. A mild English in the best sense of the term. It is sweet, has a bit of smokey goodness and more strength than I would have thought. Well balanced, with a slight deviation in flavor that pokes up to surprise you along the way. I can't tell for certain what else it has in it, but it tastes like it has orientals, Maryland and burley. Maybe some of that is dark fired, I can't tell.

I would say if you're looking to try and find an easy smoking all day English that won't ruin your palate, this is for you. Don't expect a deep experience from it, you'll be disappointed. Much like the back down south, it is more complex than they let on, but in a mysterious sort of way. There is more going on here than what's on the label, but I can't tell what for certain. I'm beginning to think the whole line may be like this.

As a smoker of mostly English blends and a big fan of latakia, this was a no-brainer to try out. And glad that I did. It is exactly as advertised-- a medium English blend. This is my new go-to as an all day smoke. Enough latakia that it gives some flavor. Already in a jar so saved me a step. Highly recommend.

Another sample from the 2018 Chicago Pipe Show. Smells like an English Blend, kinda' tastes like one, too. I say kind of, because this came across to me as a crossover blend, a darned good crossover at that. This blend really has some aromatic qualities, without the hot burn. It has a nice aroma and a great bag note!

I really liked this one. The best testament to a blend is that I will be buying more of this. Good stuff!

Purchased this back in 2015 as part of a sale and I had a credit from the company, figuring I didn't have any skin in the game. Initially enjoyed a couple of bowls and tucked it away with my other cellared tobaccos. The notes I made then say: "good smoke, nothing major, could be a all day smoke, maybe time will help it a bit". A friend received a couple of ounces as a gift for Christmas and asked if had ever tried it. After telling him what I remembered about it, I dug it out of the "cellar" and I'm damn glad I did. I wouldn't call it a "premium" tobacco, but after some time this has turned into quite the smoke. A natural sweetness to it, that wasn't as prevalent when I first smoked it. Finishes with just a little bite, but nothing major. The room note is pleasing and not overwhelming for a "English" blend. The tobacco easily ignited and stayed lit throughout the entire smoke. Btw, my friend who is relatively new to the pipe game and only smokes Aromatics thinks it's great as he moves to the Non-Aromatic world. I smoked a bowl of his and there is a definite difference in my cellared blend, and it's for the better.

I agree with previous reviews; a nice English blend with latakia and virginias. The balancing is kind of off for me; could use a little more virginias to add a sweetness, and the latakia is on the weak side as well. But this would work great as an everyday smoke, and anyone who enjoys English blends will definitely like this one as well :)

Very mild non-description English blend. Weak on the Latakia for me. Packaging is convenient as it arrives in a storable glass Mason jar.Mild enough to be an everyday smoke.Burns slowly and evenly with no re-lights needed. A bit sweeter in the middle and no bite on the bottom. Nothing memorable.